Still very little time to sew, so instead of any sewing updates I’ll share some more 17th century love. Here in the case of movies. It’s been pointed out to me that there haven’t been any blockbusters 17th century movies, which may very well have to do with some of the lack of popularity. It can be a good thing too; in general I find the costumes of 17th century movies to be very accurate, perhaps because no one feels the need to pop them up. So if you want a 17th century fix and don’t know where to look, here’s a little list, in no particular order.

Charles II: The Power and the Passion This is really a mini-series and an excellent one. Focus on the life of Charles II after the Restoration. Rufus Sewell makes a stellar job as Charles II and the rest of the cast are great too. I especially like Shirley Henderson as queen Catherine. And you can always play “How many actors also in a Harry Potter movie can you spot”, if everything else bores you.

Moliere I love this movie and think it deserves more praise than it has got. Partly, I think, because the plays of Moliere aren’t as well known a Shakespeare’s. It’s basically the same idea as Shakespeare In Love- made up happenings in the authors youth is the background to the later plays. In this movie Moliere is spirited away to a castle by a very rick merchant. If he can hep the merchant in getting a pretty young widow, the merchant will pay Moliere’s debts. Well at the castle he encounters a number of characters and incidents that later will be parts of plays. If nothing else, Romain Duris’ leather boots makes the whole movie worthwhile… 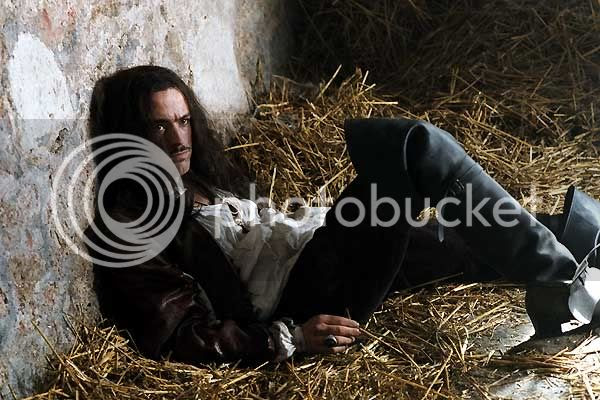 Stage Beauty A rather charming movie, if not a terribly accurate one, historically speaking. Takes place after the Restoration when the ban of female actresses is lifted.

Restoration Robert Downey Jr. are always worth watching, here as a doctor on his way up- the rest of the movie is so so. Meg Ryan is terribly miscast as a madwoman, but the rest of the cast is pretty good.

The Three Musketeers There are several versions out there. A fifties version with Gene Kelly(!) as D’Artagnan and a rather horrid from the early nineties. I would go for the version of 1974 with Christopher Lee as a very sinister Rochfort.

Captain Blood The costumes aren’t exactly the best- it’s a movie from 1935 after all. But Errol Flynn, Basil Rathbone and Olivia de Haviland make for some good swashbuckling fun.

Pirates If you can stomach that it’s a Roman Polanski movie, then this is rather good. The heroine is Spanish and actually wears one of those cumbersome Spanish gowns and Walter Matthau is great fun as the pirate Captain Red.

Cutthroat Island Another pirate movie, and of a late date, 1995. It has very bad reviews, but I think its fun nevertheless.

Cyrano de Bergerac I remember that I loved it when I first saw it, but I’ve never felt compelled to see it again. Don’t know why.

The Draughtsman’s Contract This is a very strange movie- a kind of whodunit. Takes more than one watching to get, if ever. I certainly don’t think I have. I like it nevertheless and the photograph is stunning.

These movies I haven’t seen yet, but plan to see.
Artemisia
Girl With A Pearl Earring
The Libertine

Of course there are plenty of other movies out there, which I either haven’t seen, or don’t recall at the moment.
Posted by Isis at 14:05

Great tips - thank you for these, I'm going to have to try to get hold of some of these! And I'm definitely with you on your choice of Musketeer film!

Rob Roy. Bloody, but some nice costumes on The Fop :-)

gentlewomanthief: It's a fun movie. I had a bit of a crush on Michael Yorj when I was a kid. :-)

American Duch. I agree on the costumes of the Fop, but I think it takes place in the early 18th centruy. :-) Tim Rooth makes a good villain.

I adore Blackadder and the Cavalier episode is hilarious.

There was a British mini series about the English Civil War on tv here that was really good. I think it was called "the Devil's Whore" and it was definitely worth a watch! I love both your blogs!