This isn't a fashion journal, but I have some new clothes I’d like to show off. First; my spats from Chronographia
have arrived and fits beautifully. They ARE beautiful and I’m very happy with them. Now I just want the world to be less wet so I can wear them. 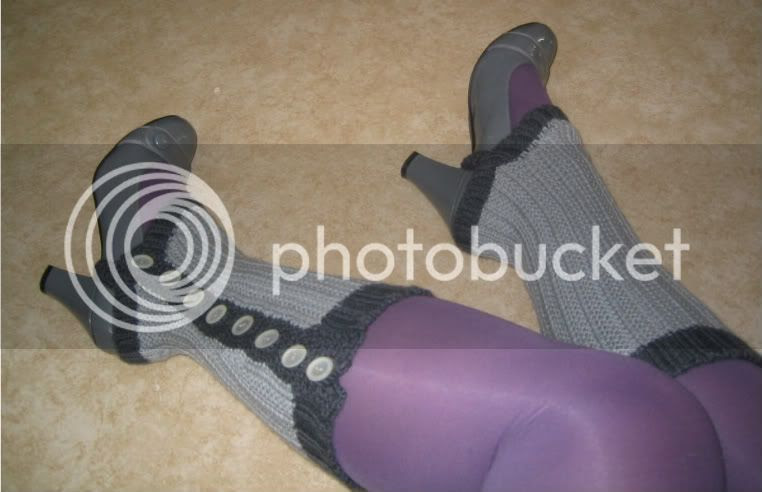 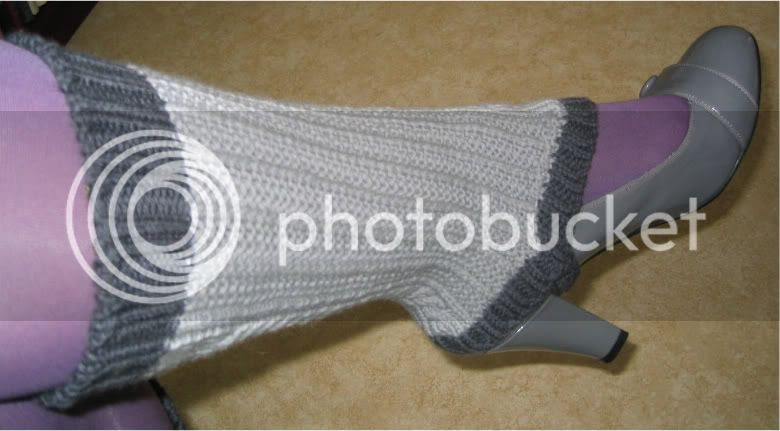 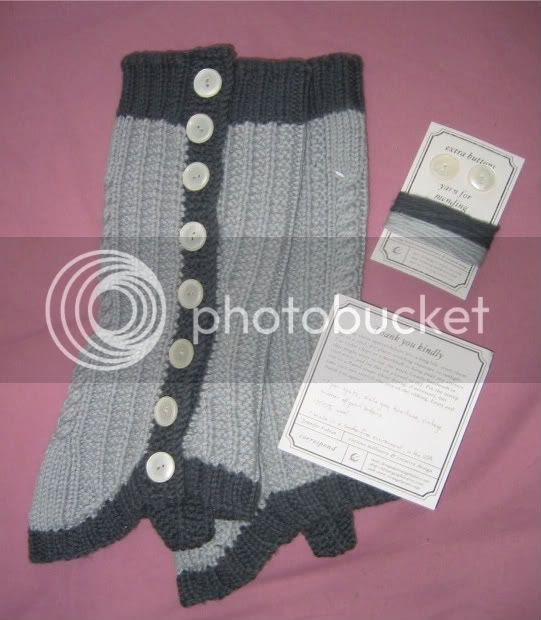 As it soon will be my birthday, I’ve shopped some birthday clothes to feel pretty in from Pin Up Clothing. A dress and a pair of shoes. 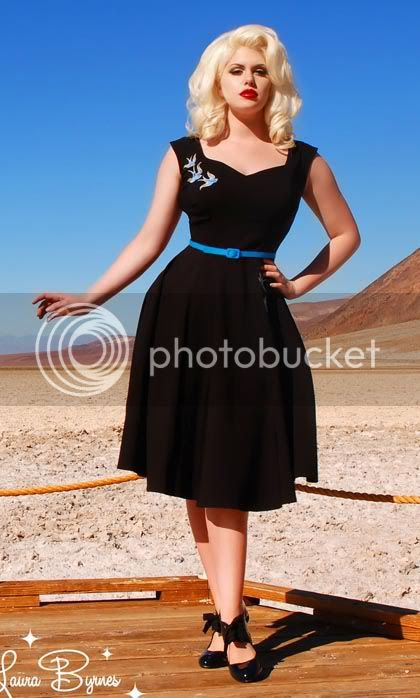 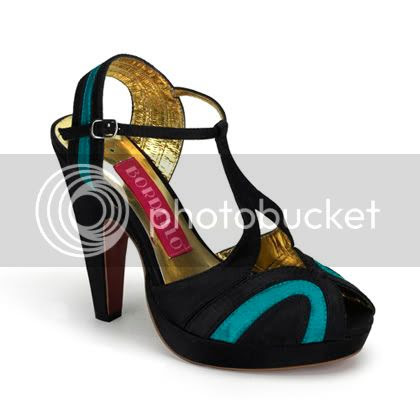 I’ve ordered shoes from them before and been happy with them, but it was a bit scary to order clothes, but both shoes and dress fits very well. The dress is a bit stretchy, which helps, but I have a feeling that clothes that’s made for retro and pin up labels take into account that women are curvy and makes their clothes accordingly. As opposed to most stores in Stockholm that only seems to offer tents if you are over a certain size. And being biggest around the bosom I kind of not want clothes that have their most narrow point there. Makes you kind of, uh, tent-looking you know.

They offer the same cut in hot pink and yellow and I’m a bit tempted to but the yellow one. Only the decorations are skulls, which isn’t exactly my style. This makes me want it, just because I want to see how people react to it…
Posted by Isis at 15:29 2 comments:

Email ThisBlogThis!Share to TwitterShare to FacebookShare to Pinterest
Labels: pin up clothing, spats

Where is the 17th century?

The Dreamstress commented that I ought to make 17th century clothes as I have the face and figure for it and I replied that I would love to do it, as I really like that century, but when would I wear it? In Sweden I could easily go medieval and up to the 16th century without problem- and I want to. And I can, obviously, gorge myself in the 18th century. Regency wouldn't be problematic and Victorians seems to be everywhere. Not so the 17th century. Here and there someone sew a gown, but there doesn't seem to be more than something occasional. Perhaps I'm just looking at the wrong places, but I don't really think so. I've hear different explanations to why the 17th century isn't that popular. Omne is that it's a more boring period if one compare it with the centuries before and after. I must disagree. Sweden was at it's biggest and most glorious at the time. England had the puritans and then the Restoration. In France the Sun king held court in the latter decades. 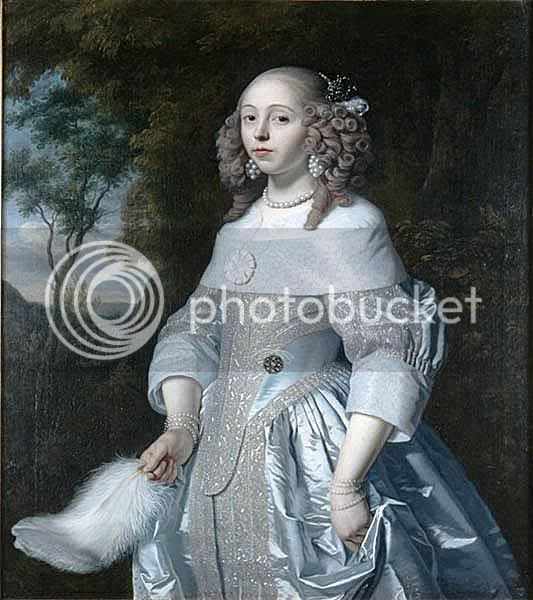 Then there is the explanation that the 17th fashion is too opulent, which it often is, of course, but hardly more so than the 16th century. What I haven't heard, but have wondered over nevertheless is that the fashion for beauty was very different from our ideals. The round faces and the often pregnant look for ladies, the double chins and overall sturdy appearances isn't exactly what we strive for today. 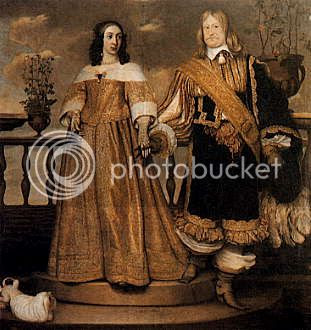 Yet another explanation is that it falls in between. The 16th century and the centuries before are so long ago that they sometimes feels imaginary. The further away it is in time, the more we have to guess and make out own interpretation which, even if you want to be as accurate as possible, a way to shape the past to what we wish it to be. The 18th century and onwards are on the other hand so close in time that we can recognise ourselves easily in it. The ideas and inventions that the 18th century stood for is in many ways what we still have- the first steps of the modern world takes place there. The poor 17th century is in between, both too old and too young. 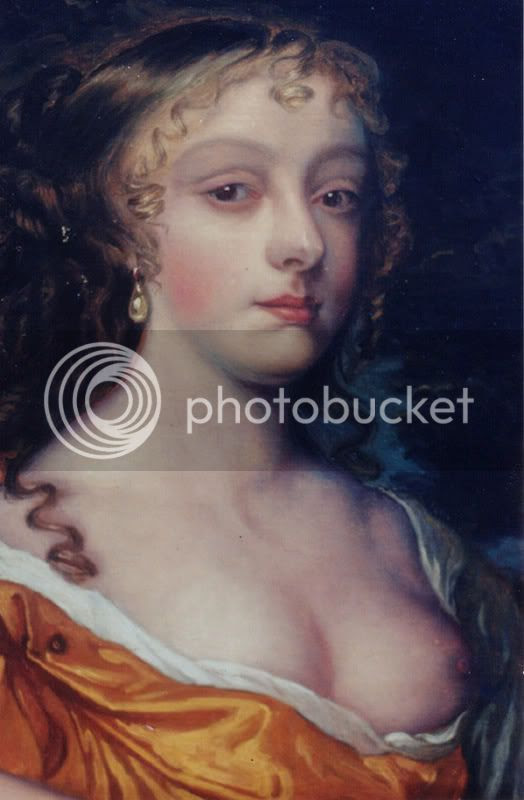 What do you think? Are there other reasons? (I guess there is several mixed into each other) or am I very, very wrong and there are plenty of 17th century re-enactments that I have just failed to notice? Please discuss, class! There was a Vauxhall at Kristinehovs Malmgård last Friday. Which I attended and enjoyed immensely. It was a smallish party, with a very simple, but tasty, dinner and then dancing and also some singing. There was also way too much of spiced snaps, which was a bit dangerous. Especially the one spiced with cardamom, which must be why I suddenly felt quite drunk… Just because I had such a good time, I didn’t have around to take many photographs, but here are the few I managed.

This was before we left. I was trying to decide if I was to wear my velvet jacket, or not and instead just wear the pink sash. I went for the jacket in the end, but here is how it looked with the sash: 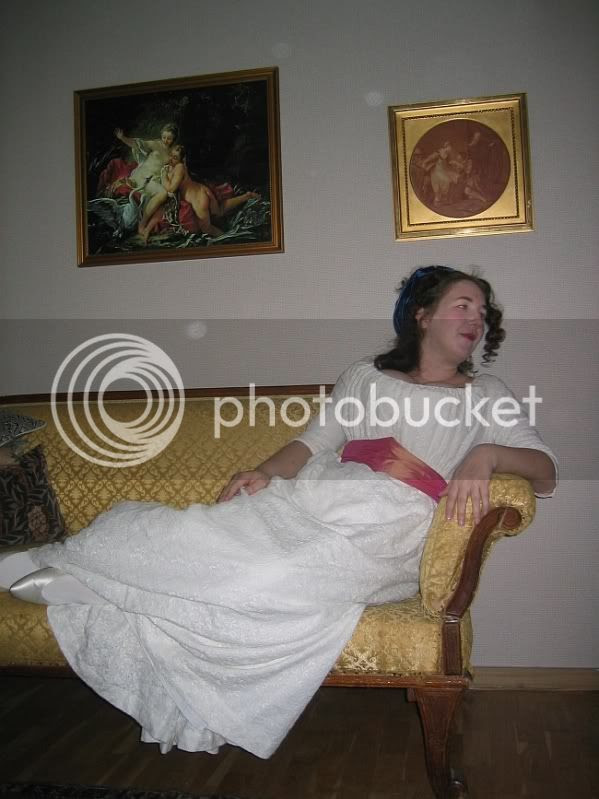 I’m still very pleased with my velvet jacket, though I have yet to find buttons for it. The pics aren’t the best as they were taken just before we went home, so my hair isn’t exactly as it was and, which I hadn’t noticed then, a seam in the arm-scye had let go. Easy to mend, though. Still, it gives a pretty good view of how it looks in the back and from the side. Pigeon-breast, much? 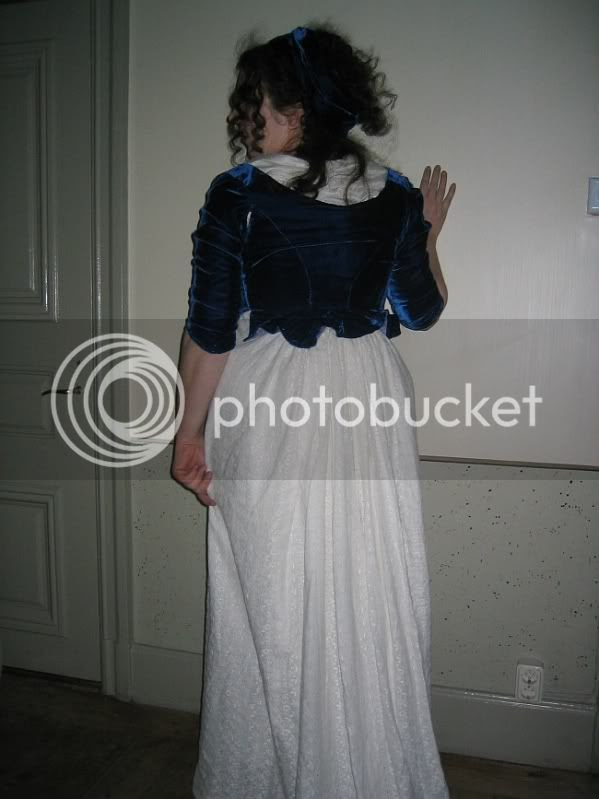 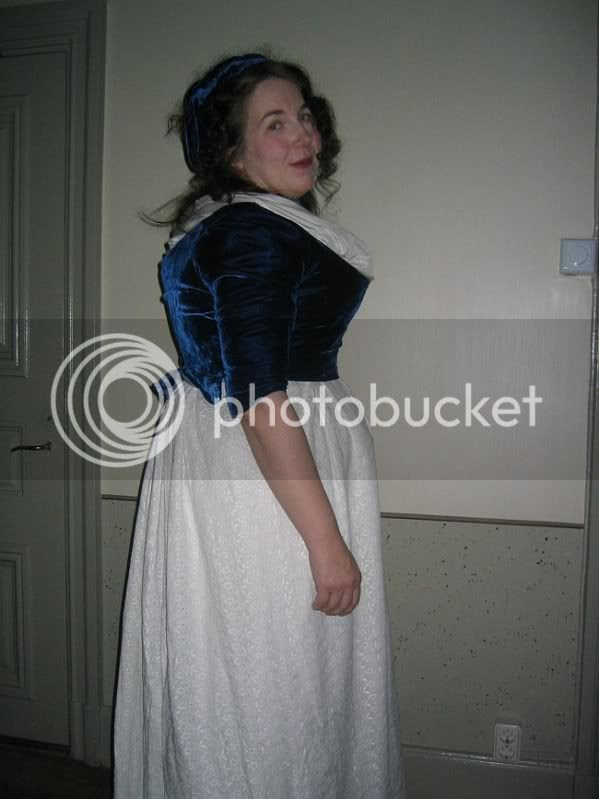 The pic is a bit too dark, but I really liked the straw-hat with the green feather! 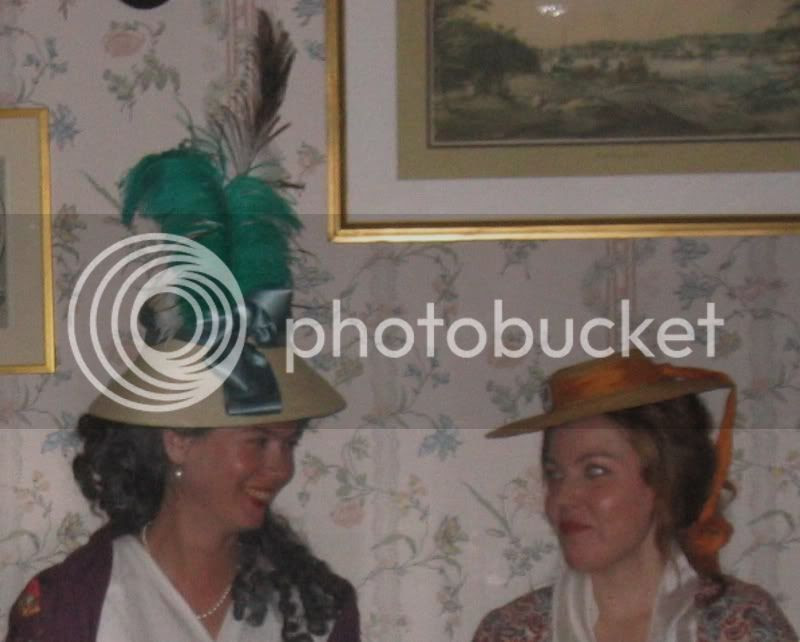 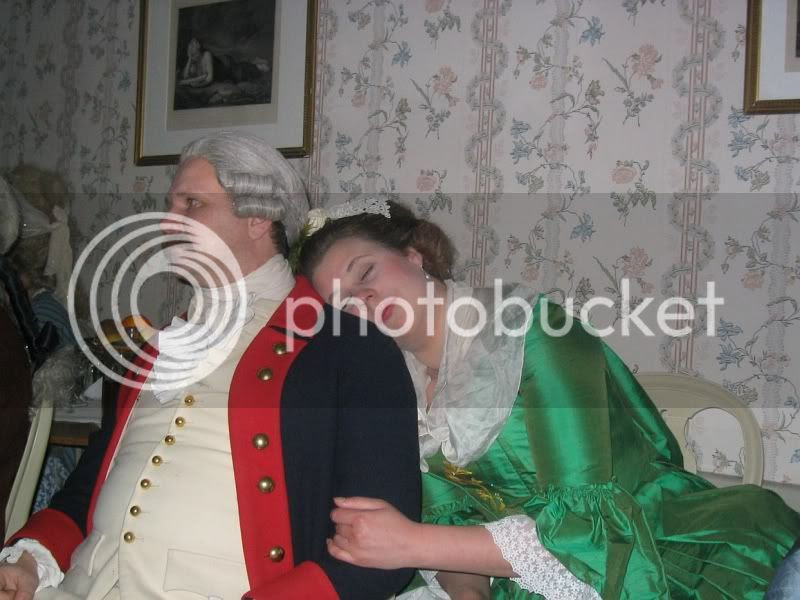 I’m grumpy, because I’ve had to cut down on my sewing in order to make my apartment ready for selling. I have dismantled my sewing table, but I can unpack my sewing machine and put it on the kitchen table. Still, a lot of stuff is suddenly hard to get at and I can’t start any big projects anyway. I’m almost done with the lacing holes on my stays, but now I’ve misplaced my awl and all the knitting needles have been packed away. *grumble grumble* Just to have something to do I cut out the pieces for a fitted smock to wear under the medieval gown I want to make. I still want to do the Moy bog gown.

Where does one buy wool suitable for a medieval gown? Handelsgillet has a lovely blue wool that I like and it’s not hideously expensive, but if I can find a good fabric for less I’d be very happy. I don’t have to have a blue gown, but I would like to have a colour that is suitable for the period. I just happen to like blue.

Just because a post is more fun when there’s a picture, here is Page inspecting my now gone sewing-table. Gone for good, because I won’t have room for it after the move, but will have to come up with something new. 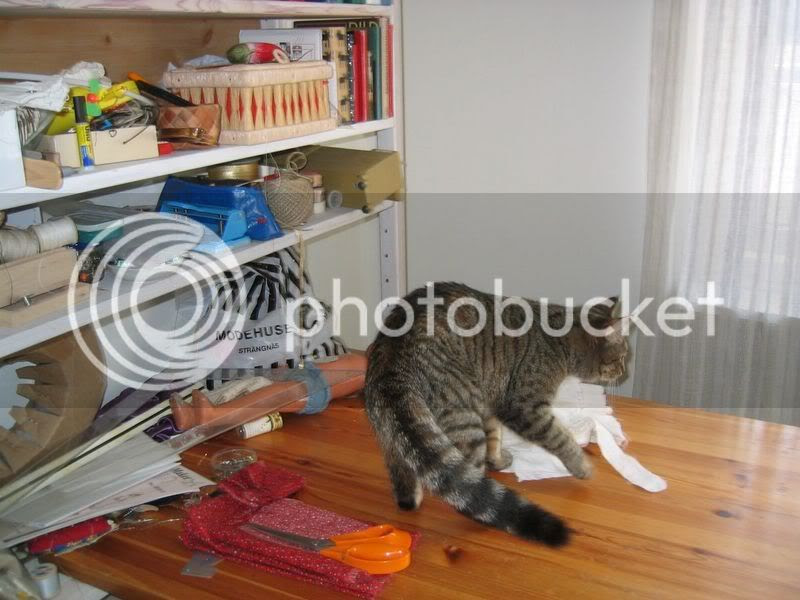 I sometimes wonder if we, well I at least, don't look closely enough on historical caricatures. Fashion has always been a subject of ridiculed
If the fashionplate show us the ideal woman, the caricature show us the opposite. Even if it exaggerate, it still show us a glimpse on how a fashion actually looked when worn by ordinary people. It also clearly highlight what it was in a particular fashion that stood out and in that, I believe, we can get very helpful pointers on what to focus on when we try to re-create a fashion long gone. Some of the following pictures is a bit naughty.

1777. It looks like the cobblers wife has borrowed a hammer to help her tighten her stays. Her husband seems none too pleased- I wonder if he don't approve of tight stays or a woman touching his tools. 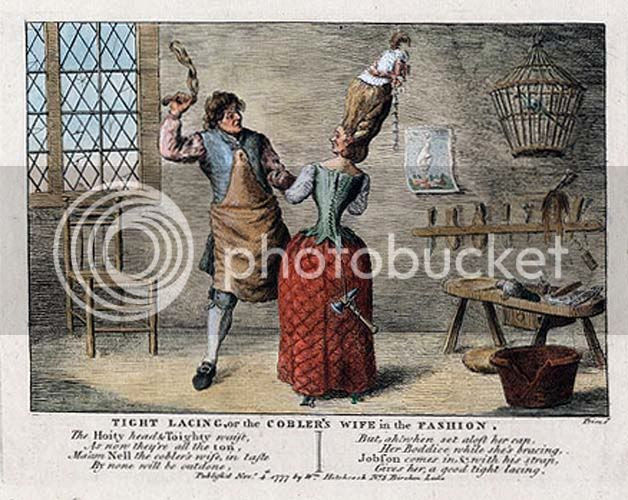 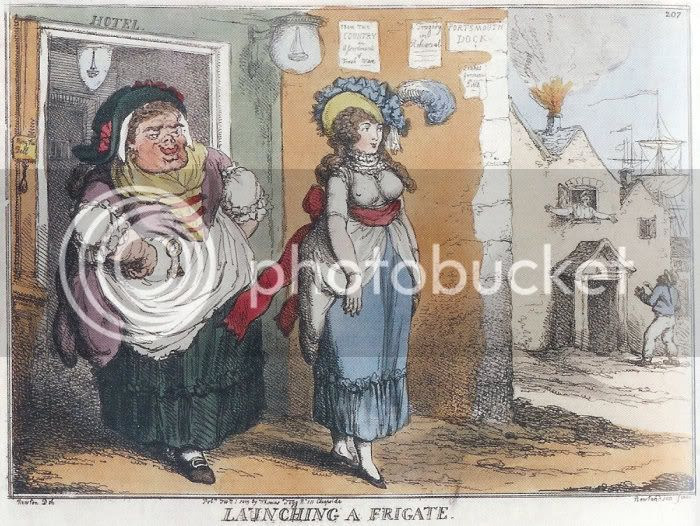 1796. Short, tab-less stays. And the eternal struggle for another body than the one you have... 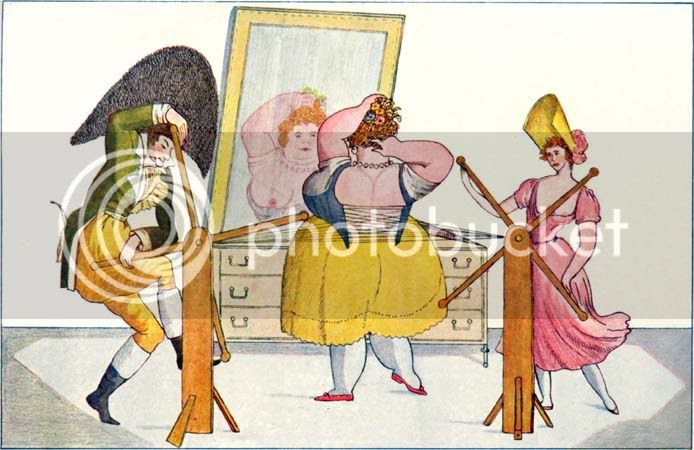 1799. Parisian winter fashion. I've no doubt that you sometimes actually did see most a woman in those clothes, especially if it rained... 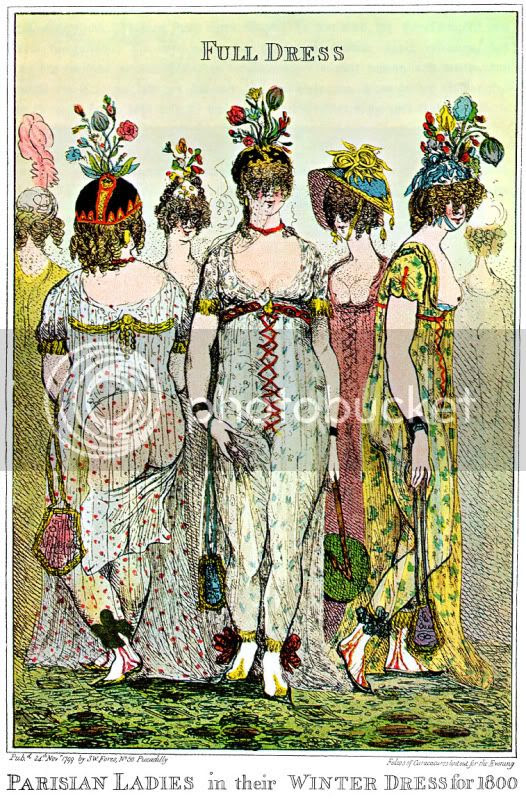 1799. Neither the very thin nor the rather fat seems to fit in these modern high-waisted fashions. :-) 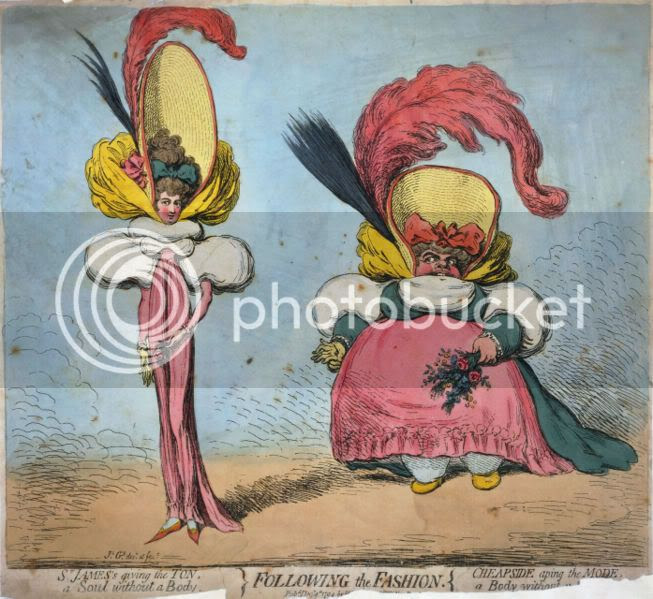 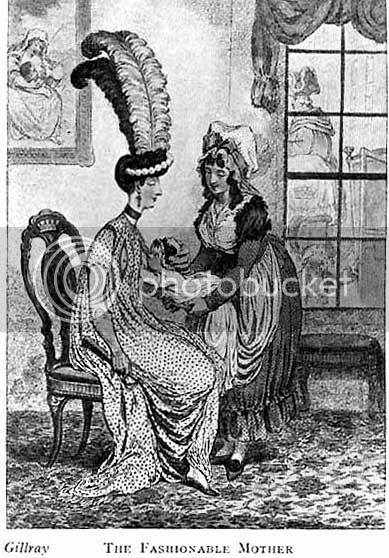 Look what I found in my stash I've no idea when I bought it and no idea what to do with it. Any ideas? The small organza flowers have a wee pearl in the middle, which you can't tell from the photo, and they are very cute. Teh small butterflies is very cute too, but the "ribbon" is a bit tacky. However, I have a sneaking suspicion that I bought it to cut out the bigger butterflies, but for what?
Posted by Isis at 16:13 2 comments: