What a man wore under his breeches

﻿ ﻿ Now and then people ask about men's underwear in the 18th century. For a very long time I thought that they just had shirts. Though it seemed rather uncomfortable to not wear anything under the breeches, a long shirt would probably serve as a protective layer between skin and clothes. There are, however, a number of paintings and engravings of men with their clothes in disarray where you can clearly see that under the breeches you can see white knee-length underwear. Here on a painting by Boilly, where the straps are undone and the stockings folded. Quite shocking.


Lucky us, we have more than just paintings. At Armémuseum in Stockholm a pair of "lårfoder" (thigh lining) have been preserved. They were a part of the standard uniform in Sweden in the 17th century and where made in coarse linen. I have seen them up close, and they didn't seem to have been very comfortable. But with unifrom breeches in heavvy wool, I guess linen underwear, even if coarse, was to be preferred.

Livrustkammaren in Stockholm has no less than two pairs of men's underwear in the same style as the one at Armémuseum. These, however, are made of fine linen and have belonged to King Karl XIV Johan before he became king of Sweden and was Jean-Baptiste Bernadotte, one of Napoleon's generals. They are dated to 1763-1818 and are probably French. They are quite similar to each other, so I just add the description of pair 21667:

Knee-length pants of white linen. Low-cut at the waist front and higher back. The waistband is wide in the front and tapers down toward the back, 70-60 mm wide. They are made with an inner and outside seam and a crotch seam. All seams are covered by a narrow white linen tape, 3 mm wide over the crotch seam and inner seams and 18-10 mm wide on the outer seams. The front has a large V-shaped slit, 147 mm long that fastens at the top with two white fabric-covered buttons. The button holes are 20 mm wide. Slit finished with a 4 mm wide band. The legs are finished with a 15 mm wide. The outside of the legs has 147 mm high slits which are tied together with white linen tape, 15 mm wide and between 430-490 mm ​​long. The back of a v-shaped slit, 130 mm long. The width of the waist is regulated by a 70 mm wide band entered through four eyelets, two on each side. The strips are crossed on the inside. The top edge of the waistband at the back is marked "IB" in red cross stitch. (Jean Baptise) On the inside of the waistband there is a "B" with white stitches.


So, evidently time to make gentlemen linen pants to wear underneath. As for ladies, even though there are no extant example, the Danish princess Sophia Magdalena had some 40 pairs of black knitted silk knickers in her trosseau when she came to Sweden to marry Gustaf III in 1766. Not for modesty's sake, but to fight the chill of the cold Royal castle.

I finally got around to properly link and add picture to the tab My 18th century wardrobe. Slightly depressing as it highlights what a slow seamstress I am. Of course, I have made other stuff than 18th century, but still... 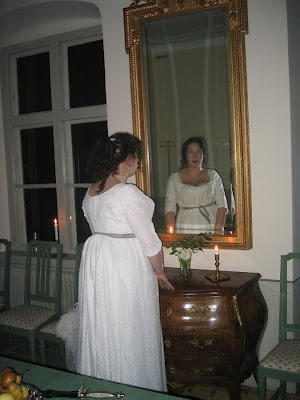 Finding pictures of people wearing masks are much harder to find than when the maska are held in the hand. That's not so odd- why would you want to have a apinting of yourself when you are wearing a masked. So masked ladies and gentlemen tend to be generic rather than specific, but still making interesting pictures.

Pietro Longhi painted a numer of paintings depicting masked people that didn't have to be attending a masquerade, rather an example to how masks could be worn in daily life. The white mask is called Bauta or Bautta and was very popular as it allowed the wearer to eat and drink. This masked could be worn both by men and women. Note the child in the Harlequine-costume.

Look at enough paintings and you will find that some costumes return again and again. Like the charming Harlequina in her patchwork clothes.

﻿﻿﻿Of course, they may be paintings of the actual play. Still, it is easy to see how the costumes would work very well for a masque as well.﻿﻿
﻿﻿﻿
﻿

﻿﻿﻿﻿﻿﻿
This jacket may or may not be a masquerade costume, it is catalouged merely as a jacket, but it doesn't seem unlikely, don't you think?﻿﻿﻿
And these charming figurines are a great inspiration!
﻿﻿
﻿﻿

A black costume with red/pink details, slashed sleeves and, often, a little cape can be seen on several portraits. I am sure they are meant to portray something specific, but I don't know what. It is very pretty, though.
﻿﻿﻿﻿﻿﻿﻿﻿
﻿﻿

﻿﻿﻿﻿﻿﻿
I'm not really sure if these are masquerade costumes or just meant so be allergorical or just something romantic for a painting, but they are not ordinary fashion and quite interesting as well. Especially if you consider that these three span over at least 50 years and three different artists.
﻿﻿﻿
﻿﻿﻿


Lady so and so as Diana are perhaps more allegorical than anything else and very popular. Nattier for example, seems to have really liked to paint ladies with a bow.

I have a feeling that these three are really dance costumes and being painted by the same artist may very well be the reason that they look a bit similar. They are really lovely, though.

With mask in hand

Not every pictured masquerade costume in the 18th century includes a mask and not every costume is a costume, it may be perfectly ordinary clothes with a mask added. This post is dedicated to pictures where the mask is not worn, but held in the hand.

Plain black masks. This one is still unusual as it is a half-mask and with red ribbons to tie it around the head.


The Moretta mask, a woman's mask, is a plain black velvet mask with no mouth opening and it was held in place with a button on the inside that teh bearer held between her teeth. These seem to be variations of that one. I like that her hair isn't totally powdered, but just applied around the face.


﻿A rather sad-eyed version.
﻿﻿I have seen pictures of the actual painting, but haven't been able to locate it on the Web, unfortunately ﻿﻿ ﻿﻿﻿﻿﻿﻿ ﻿﻿﻿﻿﻿﻿﻿ ﻿ There is also a version where the mask is painted like a face with a mask just over the eyes. I wonder if teh effect wasn't a bit spooky. Here there is even patches painted on. I also find her miniature tricorne hat adorable. I think I need one for the next masked ball I attend. Here is the maske without the painted on mask. If anyone feels the title is odd, then perhaps it will get a bit clearer if I say that nun could be sland for a completely different profession...