Middle-class women in Sweden during the 17th century

This is a reference post for a future project, put here for easy access when the future
comes.

I have, thanks to several interested relatives, a rather good knowledge of my own family
tree. And sometimes when I can’t sleep I dig around the Net, and have found several
portraits of my ancestors. One of them is this grim-faced lady, Kristina Olofsdotter Spak.
(1616-1676). , who was a great-grandmother eleven generations removed from me.

She was the wife of Johan Börjesson Carlberg, who as the mayor of Karlstad, which is the
biggest city in the province of Värmland, Sweden. Her father and her mother’s father had
previously also been mayors of the same city, so it can safely be said she belonged to the
upper-middle classes. When I saw this portrait I was struck by a feeling I had seen a lot of
similar clothes on the excellent site Dragter på epitafier og gravsten i Danmark (Clothes on
epitaphs and graves in Denmark) The focus is, of course, on Denmark, but they have also
included a fair number of pictures from Sweden (and also Germany). The time periods
stretch from the late 15th century to the 18th century, but most are from the 17th century.
There is also a heavy focus on priests and their families.

I went through all the Swedish sources (Apart from those from the provinces Blekinge,
Halland, and Scania, as those were Danish up until 1658, and I thought it likely Danish
customs when it came to clothing would likely hang around. As it is the female clothes are
pretty similar, but there are differences in details I wanted to catch.

A general overview of these dresses, married women a white shift, worn under a black
gown with an oval neckline, edged by a plain white collar. Sometimes a white apron is worn,
and sometimes a neckerchief covering the decollete. They wear a white cap, often worn
over either another white cap, or a forehead cloth, and nearly always with a black cap on
top. On several portraits from the regions around Lake Mälaren, red caps are worn with a
rather intricate veil. Lace is very rare, though sometimes the shift sleeves have a little frill,
and jewelry are worn sparingly, and mostly consisting of heavy metal chains. Sometimes a
black mantle is worn over the other clothes

As you can see Kristina Olosdotter Spak fills in most of the slots. She is on the plain side with
no frills and jewelry. It also seems possible she is wearing a jacket, which may mean she is
wearing a more gown-like bodice underneath.


Here are a few similar portraits.

Even if changes in fashion occurs, they seem to have been much slower than high fashion.
Here is Elisabet Persdotter who died in 1674 and her daughter Margareta Höijer who died in
1700, looking rather similar. Margareta is more fancy, though, with earrings and showing a
bit of hair.

Of course, some portraits are posthumous, which may explain the stagnant fashion. Dead
wife has plainer cuffs, a back ribbon around and arm, and less visible hair. I also think wife
#2 looks like a real person, while #1 looks stiffer and more impersonal, so I suspect #2 was
actually painted from life.

There are more fancy examples, but they are in a clear minority.

And with white aprons and mantles. I need to hunt down my source, but from what I have
read, you wore mantles and aprons for church.

Black mantle, and a somewhat surprising colourful bodice. Also those red caps with veils I
mentioned earlier. I'm so curious about them. Starch only, or some kind of wire construction?

More mantles and red caps. It also seems red or gold belts were often worn in this region.


With the black cap.

A little unusual; no white cap under the black one, and another kind of collar, (or should I
say partlet?)

Here’s the oldest picture I found, from the 1580s, but the main elements are all there:


There must be some kind of padding, or a very high bun because on many portraits the
black cap is placed very high.


If anyone wonders about the difference between Swedish and Danish customs, here are the

main ones I’ve noticed. Black caps which have extremely deep curves. Black caps which
are flat and wide. And white aprons with a distinct V-shape at the front. At first, I thought
it was because they were worn under a bodice with a dipped front, but on some close-ups,
you can clearly see that they are worn as a top layer. I assume the shape comes from
pinning the apron- they don’t seem to be tied in the back, and very possible also starched.


My future plan is to make a gown with a boned bodice, ca 1660 in black wool which I could dress up a little, and then the more jacket-like bodice my ancestress wears. I also want to make the white and black caps, though I don’t know if I can manage that strange high crown. I also need to work on my disapproving frown!
Posted by Isis at 20:39 3 comments:

I only now realised I never posted pictures of my closed-front robe à la française. Well, it was finished (sort-of)
and worn at the ball in June, and I had an absolute blast: 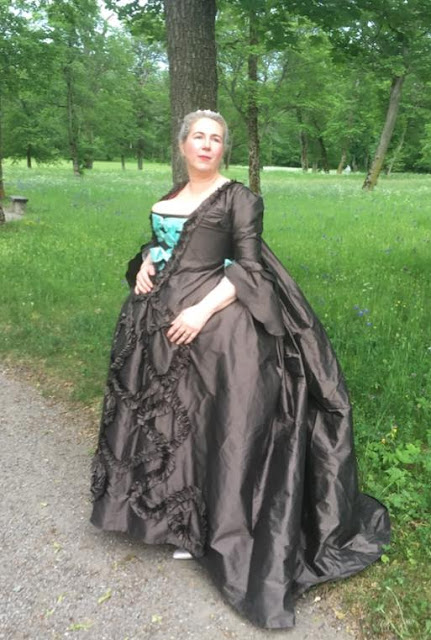 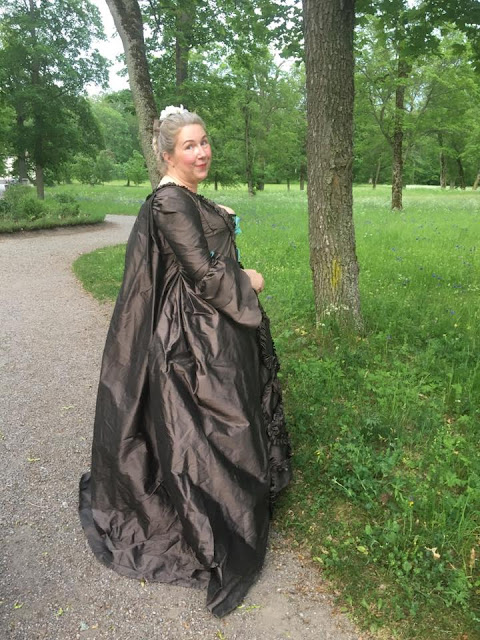 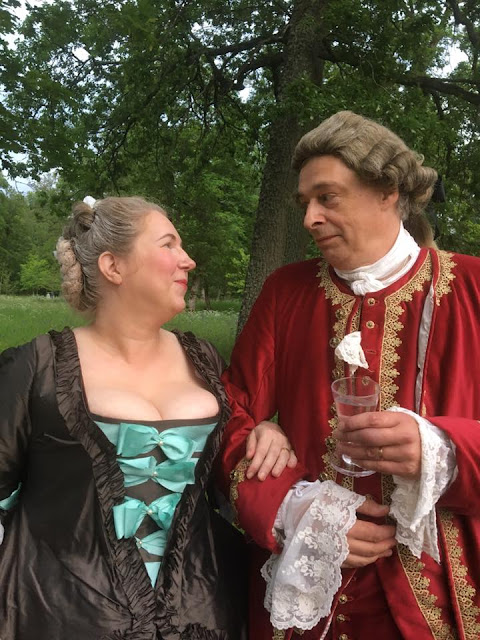 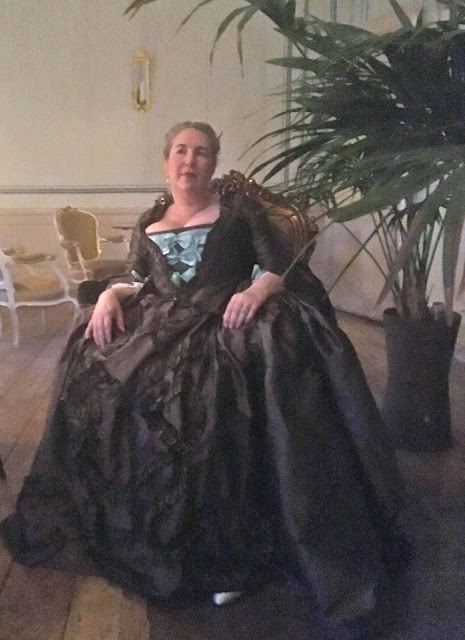 Now I need to change a few things. The bows on the sleeves are set on the wrong place and need to be moved
(that is what happens when you attach them five minutes before you really should leave…).  And the decorations on the
robe needs to be sewn down along the edges and not only with basting stitches in the middle. I also plan to make
a pair of winged cuffs and an embroidered stomacher so I can use the gown for an earlier date than the 1760s.
Posted by Isis at 09:40 2 comments: