The last half of the 17th century. This is an overview to cover popular styles, not a complete record of every particular fashion. For those who has missed the gentlemen, their turn will come.

In the late 1640's this style became popular and kept it popularity for several decades. It had a boned bodice, omitting the need for separate stays, a neckline that showed the shoulders and large puffed sleeves that could en under the elbow or be quite short. The bodice could be plain or heavily decorated. Most seem to have been laced in the back and worn with a matching petticoat, although some Dutch painting depict bodices and petticoats of different colours. The petticoat could also be split in front.

In the 1650's the low-cut neckline could be hidden underneath a collar that covered collarbones, shoulders and the upper sleeve.
Riding habits were cut to mimic men's fashion in the coat, but worn with petticoats.

In the 16th century ladies opted to be painted in their most fashionable clothes, in the early 17th century it became fashionable to wear more relaxed clothing and the natural progression was, perhaps,  to be portrayed into fantasy clothing. That was what became popular anyway and Sir Peter Levy really cemented that trend in the 1660's with painting women wearing artistically draped fabrics, probably all along aiming to frustrate costume nerds in the future, and this remained popular for the rest of the 17th century.
﻿
It was also fashionable to be painted in a night gown, a gown meant for leisure at home. It was usually cut along the same lines of the current fashion, but was more unstructured and worn without stays. It was usually fastened at the front by spaced buttons or clasps.
Dutch paintings from the mid-17th century often depicts women wearing a loose fur-lined jacket, but this seem to have been a fashion for the region. Numerous paintings by several different artists makes it an icongraphic garment nevertheless.

Though rarely seen on portraits, the mantua came into fashion in the 1670's. It originated from a T-shaped garment meant for leisure, but though it was pleated in folds around the body, it was soon worn with stays, making it an altogether more structured garment than a night gown and soon worn for occasions that didn't call for the rigid bodice of a grand habit. The mantua was rarely painted, but can be found on numerous fashions plates. By the end of the 17th century it had stepped up and could be worn both for everyday activities as well as balls.

In Spain the farthingale grew larger and larger, biding it's time until the 18th century when it would, once again, take the rest of Europe by storm as the panier.

Last weekend we visited Finland to attend to an 18th century Christmas ball at Sveaborg, or Suomenlinna, a sea fortress just outside Helsinki. It was my first visit to Finland apart from Åland and my sole excuse is that I hate boat rides. I was pleasantly surprised in having a good time on the boat or way out, but going back I got sea-sick and I still get dizzy spells when the whole world heave around me. I had such a good time though, that I think I will brave the Nordic sea again. I forgot my camera, but Sanna of Rococo Atelier kindly allowed me to use some of her pics. It was a real treat to meet her again and I think you will agree that looked stunning in her new white gown! I also got to meet Merja of Before the Automobile, which was a real treat, though unfortunately she wasn’t feeling well and had to leave early. She was equally stunning in white as well and you can see her pictures here. There were a lot of very pretty and well-dressed people at the party!

Myself I opted for a simpler garb, simply because I finished this gown in August and still hasn’t had an opportunity to wear it. I used the same pattern as I did for the yellow and the white gown and the material I striped linen. I hadn’t planned to make yet another 1780’s gown so similar to these, but when I found this painting and right after found such lovely striped linen, I just couldn’t resist. I usually combine machine sewing with hand sewing, but as an experiment I made this gown completely by hand and I wanted to see how ling it would take me. I can now say that a simple gown with no decorations takes me 51 hours to make. I only worked on it on odd times here and there and very often while I was watching the telly, so I am fairly certain that it would have been a faster project, time-wise, if I had just worked on the gown and not multi-tasked. I think it turned out very pretty, but it also gave me a complete surprise. As I have used the pattern several times it really, really fits me, so I blissfully worked away feeling secure that it would fit. Well, this linen stretched… So it turned out way too large! The back fits too loosely and the shoulder straps are much too long. I need to cut them shorter and re-fit the sleeves and also make the back smaller. Very annoying and I have only myself to blame. 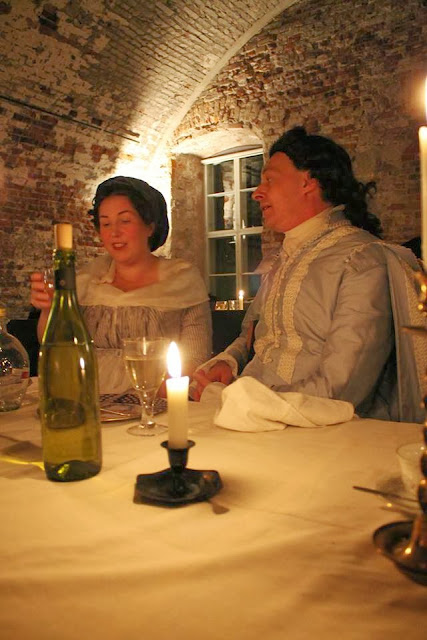 Having cut my hair suddenly makes hairstyling a challenge. I really need to update my wigs now, but for the ball I opted for a turban with a few curls peeking out. I think it looked fine, but the turban kept trying to escape. Next time I will put in a few stitches to keep it together and a comb to make it stay put! I also realized that I have developed a go-to makeup when it comes to the 18th century. I really like my Nun’s cream with real pearl powder. It is only slightly whitening- I can only see that effect when I’m a bit tanned, but the light reflecting particles in the pearl powder reflects the light and makes my skin look very even and nice. Rouge with Carmine suits my colouring quite well too.

But back to the party. It was held in what used to be, if I understood it correctly, the mill, but it was very atmospheric and spacey. There were plenty of good food and some vigorous dancing followed by some equally vigorous games. I had only met Sanna before, but we were about 10 guests from Sweden that I also knew. It would not have mattered if I hadn’t known anyone, though, because everyone was really nice and welcoming and I had a lot of fun. I was a little taken aback that everyone seemed to know who I was- I felt quite famous and J is still teasing me about it. 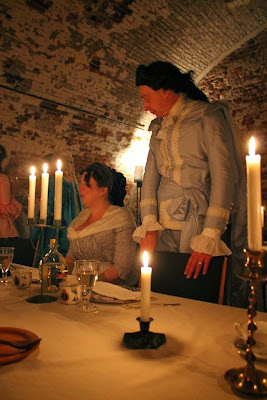 Sveaborg started to be built in 1748 as a protection of the Russians. At the time Finland belonged to Sweden and the man responsible for the project was Augustin Ehrensvärd, a Swedish military and architect. He was an interesting person who were also interested in art, botany and psychology and perhaps it was he latter interest that made him take the rather unusual decision to make sure the people who worked on the fortress had better food than builders usually got and also health care. It was a good decision because there were less accidents and deaths during the construction. It is really a very beautiful and interesting place and I hope we get to explore it better the next time we visit.