Supportive underwear in the 15th century


As I mentioned in my previous post on 15th century clothes, my first step will be to make supportive underwear. Some comments recommended me to make a snugly fitted shift/kirtle instead and I am sure that can be a very functional breast support. Not for me, though. I have made plans for medieval clothes before and even started, trying this method and it just doesn’t work for me. I have a large bust but a very narrow ribcage, my under bust measurement is actually the narrowest part of my torso and the difference between bust and under bust is 35 cm (almost 14 inches). To give me support I need to overfit the garment up to a point that it looks silly and feel uncomfortable and it put a lot of strain on the fabric. This is why I want to solve the support problem with a separate garment so I can fit my kirtle to look nice instead of too tight. Perhaps separate supportive underwear wasn’t very common, but as there are textual evidence on some kind of support, paintings of women in garments that looks like they could have a supportive function, and, of course, the extant clothes found in Lengberg Castle, which is enough for me. Especially as I will never make any clothes before from 1500 without it.

So, the Lengberg brassiere. Or, rather, one of them as there were actually four found in Lengberg Castle in 2008 among a whole cache of textile fragments. Two of them have been carbon dated to the 15th century. So far no close examination have been published, though one can hope that it will be available in the future along with, of course, patterns. Here is a quote by Beatrix Nutz from Medievallingerie from Lengberg Castle, East-Tyrol.


Four linen textiles resemble modern time bras. The criterion for this classification is the presence of distinct cut cups. The two more fragmented specimens appear to be a combination of a bra and a short shirt. They end right below the breast but have additional cloth above the cups to cover the décolleté, and no sleeves. Both “bras” have decorated lower ends. Finger-loop-laces (laces worked in loop manipulating braiding technique) are sewn onto the hem with lace-stitches resulting in simple needle-lace. Besides its decorative function - one that cannot be seen anyway when worn under a dress - this also serves as reinforcement for the hem and adds further support to the breasts.
The third “bra” looks a lot more like modern bras with two broad shoulder straps and a possible back strap, not preserved but indicated by partially torn edges of the cups onto which it was attached. The knot in the shoulder straps is secondary. This “bra” is also the most elaborately decorated with needle-lace on the shoulder straps, sprang-work between the two cups and, like the two aforementioned “bras”, a finger-loop-lace and needle-lace at the lower end.
The fourth “bra” is the one that resembles a modern bra the most.  At the first assessment this garment was referred to in German as “Mieder” (= corselette in English) by the excavating archaeologists. It can also be described with the term “longline bra”. The cups are each made from two pieces of linen sewn together vertically. The surrounding fabric of somewhat coarser linen extends down to the bottom of the ribcage with a row of six eyelets on the left side of the body for fastening with a lace. The corresponding row of eyelets is missing. Needle-lace is sewn onto the cups and the fabric above thus decorating the cleavage. In the triangular area between the two cups there might have been additional decoration, maybe another sprang-work.
She has also written Medieval Underwear which contains some more information.

However, the most detailed information by Beatrix Nutz can be found in Bras in the 15thcentury, A Preliminary Report. You will need to register at Academia.edu to download the article, but that’s pretty easy to do.
Medieval Silkworm has two interesting articles at her blog with lots of quotes and pictures:


I don’t know, yet, if this kind of supportive garment will work for me, but I think there are good chances. Katafalk has a similar figure to mine and her version of the Lengberg brassiere seems to giver her good support as well as being comfortable.
A few other recreations:
Renikas Anachronistic Adventures: All dressed up Housebook style
Deventer Burgerscap: Making My Bra Shirt, part 1
Mady’s SCA Sewing Thingy: Under There!

A tenative step toward the 15th century

My weekend plan was to work on J’s banyan that I almost finished cutting out a long time ago. An old UFO in other words. I had a nagging feeling that I hadn’t cut all the pieces because I didn’t have enough fabric, but as it turned out I do have enough, only I have to pierce the lining. And the lining is in very slipper silk satin, hence my lack of enthusiasm. I have now finally cut out everything and started to sew it all together, currently muttering over the gussets over the arm, but then a looming cold drove me into the arms of a welcoming sofa instead. So instead of sewing I spent two days under a blanket draped with a cat, or two or a stray dog.

I also joined The Manuscript Challenge on Facebook. The idea is to choose a garment from a manuscript, or similar from any medieval period up until 1500. From the day you upload the chosen picture to the challenge you have one year to complete the complete outfit and you have to make visually as close to the picture as you are able to. There are no rules about material though. This is very challenging for me as I find it extremely hard to keep to one visual source when I make my costumes. So that alone will be a new experience. I am also venturing into a completely new time period, which is why I joined the challenge. I have wanted to make a late 15th century outfit for some time and I hope this will make it happen and a year seems to be plenty of time. (We’ll see what I will say about that in ten months…) I’m not a complete novice in the 15th century in theory, I do know quite a lot about fashion history outside my comfort zones, but I don’t have the fine-tuning. So I want to make something that a) I like and b) is something I can pull off. So I decided on this outfit. 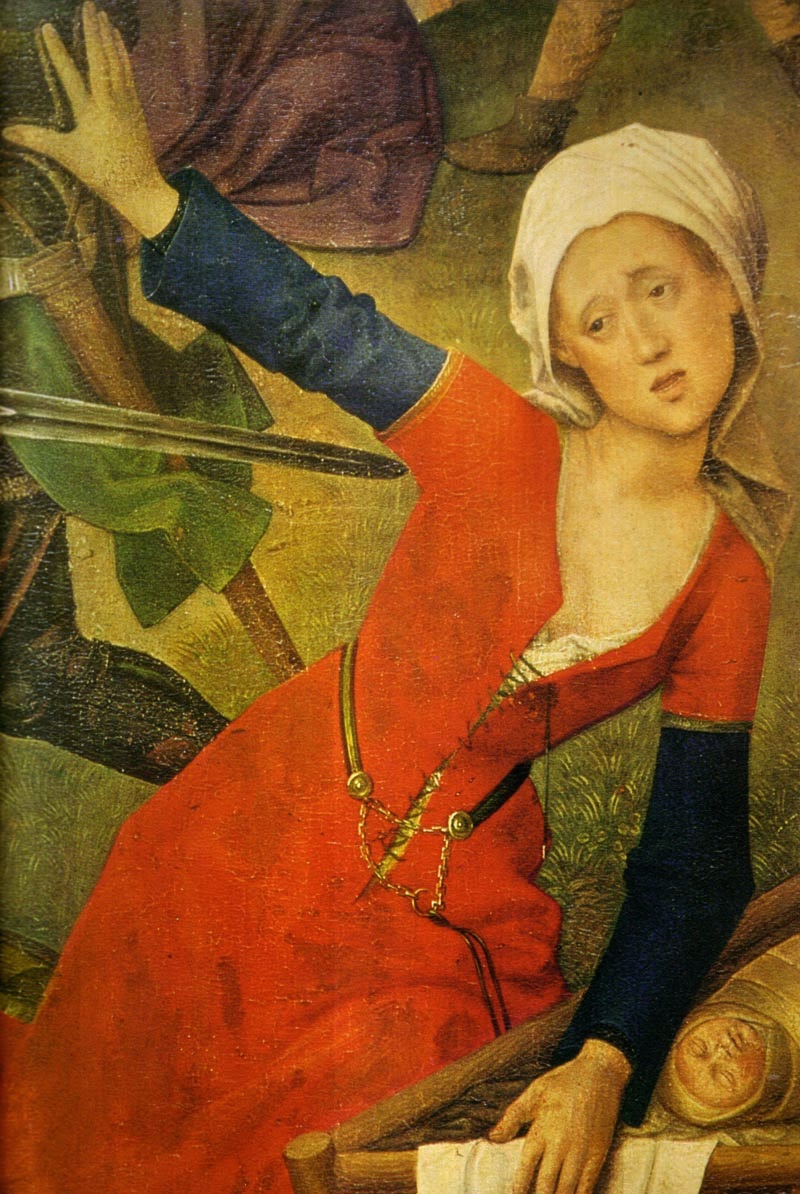 It is from a depiction of The Massacre of the Innocents, part of The Adoration of the Magi by Hugo van der Goes dated to the 1470’s. You can see the whole painting here. It is not from a manuscript, but the challenge to add or similar and no one has protested about my choice, so I guess it is all right. The outfit seems quite simple with some interesting details and is giving me a few things to puzzle over. I guess those of you who know the period finds it all very easy, but remember, for me it is all new. Another point in its favour is that it would be fairly easy to build up a small wardrobe from it. Another set of loose sleeves, an apron, other headdresses. I also quite like Burgundian gowns, which I figure would work well to wear over the kirtle.
What kind of pattern should I use for the kirtle? On the painting it seems virtually seamless, which of course isn’t possible. A fitted garment like that need seams and other paintings show them. Being much curvier than the woman on the painting I need to figure out what would be the best pattern for me.
How do the blue sleeves stay put? I confess that I didn’t realize until after I choose this outfit that the sleeves aren’t pinned on top f the short sleeves of the kirtle, but goes underneath. My assumption is that they are basted to the kirtle, or possibly, to the shift. 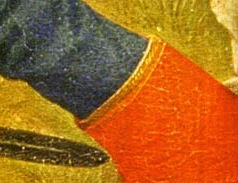 What about the shift anyway? They seem to have had long sleeves and there are pictures of women with no loose sleeves. But there are also this version with a sleeves and snug bodice. One of the reasons I have balked for pre-corset fashion is that I really need breast support. I have tried the snugly fitted shift-method and found it both uncomfortable as making me look like a sausage. After the Lengberg brassiere was found a new vista has opened up for me and Katafalk has made a really lovely version that seems to give good support as well as looking remarkably like the pictures. She has smaller breasts than I have, but I still think this would work for me and as she so kindly offer her pattern for free, I have a pattern to start from instead of doing it from scratch. What I’m wondering about is if this brassiere was worn instead of a shift or with? Obviously the pictures of women in just shift and kirtle shows long sleeves on the shift. Except this one... And on “my” painting the shift is obviously a bit more disarrayed at the neckline than something that fits tightly. As for now I’m inclined to make booth, opting to make the long sleeved shift in finer linen to avoid bulk. 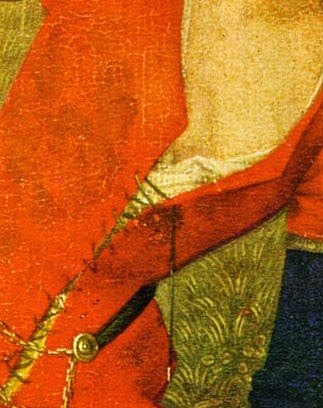 I also wonder what the black that is visible under the blue sleeves are. Another pair of sleeves? Black cuffs? Though not cuffs for the blue sleeves and I have never heard of black cuffs on shift. There is also a possibility that we are seeing liberties of the artist, I guess it is possible that the black is there to really make the hands pop out. It might also be meant as a shadow from the blue sleeve, but I mighty odd shadow, if you ask me. 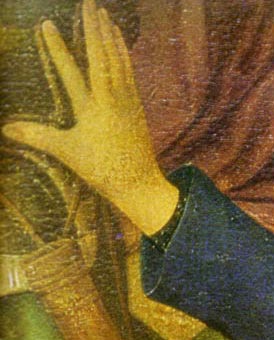 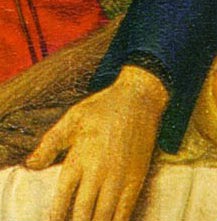 The headgear baffles me as well. Is it a sewn cap or is it just a piece of fabric that have been pleated and pinned? Oh well, I have some time to figure it out. 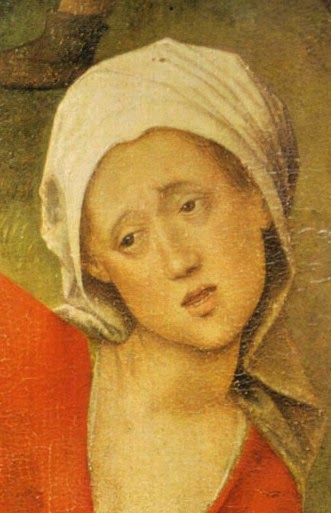 Then there is the belt, which seems pretty straightforward, but what is the most likely object hanging from it? A purse? 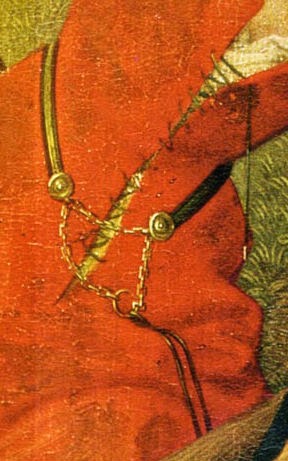 You see that I have a few things to ponder. I also need to figure out stockings and shoes, even if we can’t seem them on the picture.