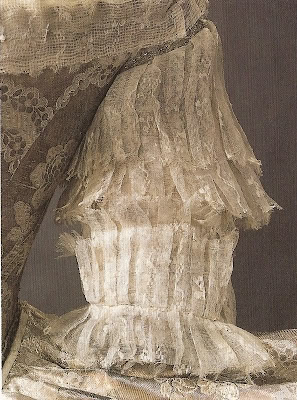 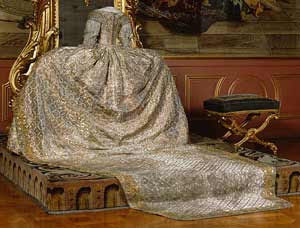 This gown and its panier have had their pattern taken, but I don’t know in which book it has been published in. I was given Xeroxed copies years ago and don’t even remember by whom. (corbaegirl has kindly told me that it is in fact from the book History of Costume: From the Ancient Egyptians to the Twentieth Century by Blanche Payne.) 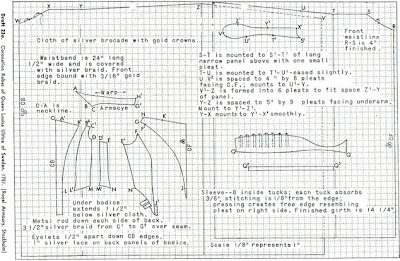 The bodice pattern doesn’t seem to have any tabs and there is no information if the inner layers have the same cut as the outer layers. It has an iron busk down the front. 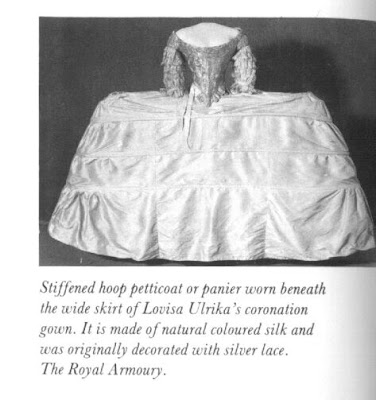 The panier is very box-like and if you look at the pattern you can see that the petticoat is made in a way that the later robe de cours are not. In fact, I haven’t seen this kind of petticoat anywhere else. Have you? If you look at the pattern you see a panel with a number of letters, corresponding to the letters of the skirt pattern. This is a panel that sits on the top of the panier, giving the petticoat a very boxy shape. 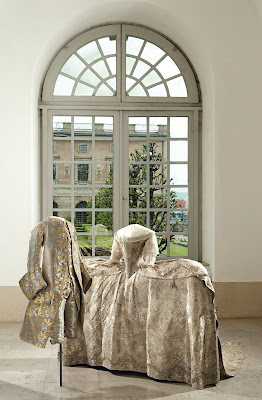 Queen Sofia Magdalena’s wedding gown from 1766. This gown is by far the most researched. Janet Arnold took a pattern for it and there is also a small booklet (in Swedish, alas) about it. The inner layer has more pattern pieces than the outer layer and the outer layer alone has the much curved front seam, you can see that very clearly in this x-ray. There is also wire inserted along the waist and top of the bodice. 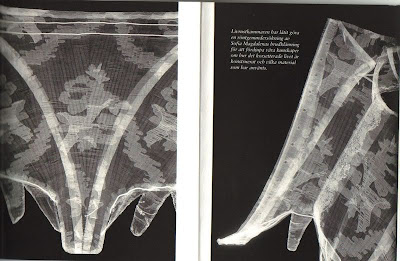 The inner layers are made in heavy linen and it’s lined with silk taffeta. 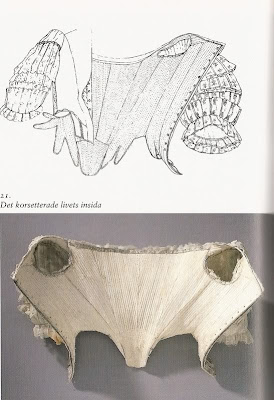 The panier has a similar box-shape as Lovisa Ulrika’s, but the petticoat is sewn differently. There is no top panel and the side seams on the front piece slants outward so it’s wider at the bottom. 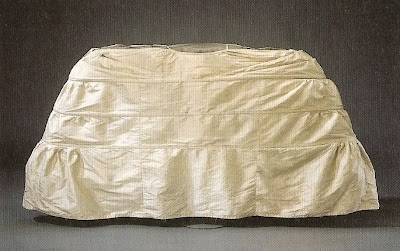 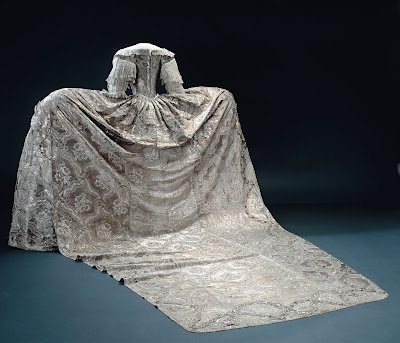 Unfortunately I have no picture of Sofia Magdalena’s coronation robe from 1771, but it looks, at least, very much like the wedding gown. The curved front seam on the bodice gives a very interesting optical illusion of a wide chest and a very narrow waist. Well, she had a narrow waist to begin with, but it’s a nice illusion anyway.

Then there is the wedding gown of Princess Hedvig Elisabeth Charlotta, which is much more elegant in appearance, especially compared to the gown from 1751. 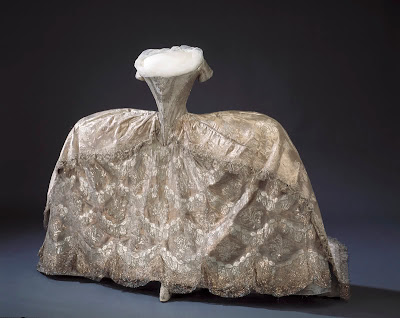 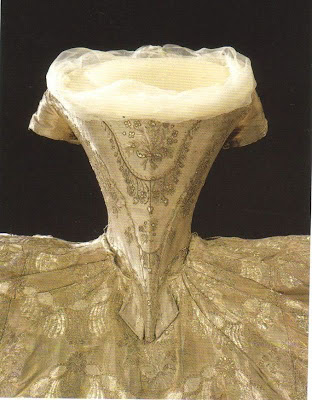 The back where you can see the hooks needed to attach the train. 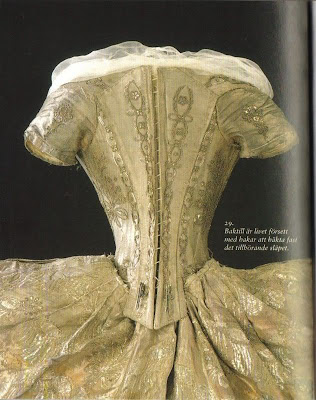 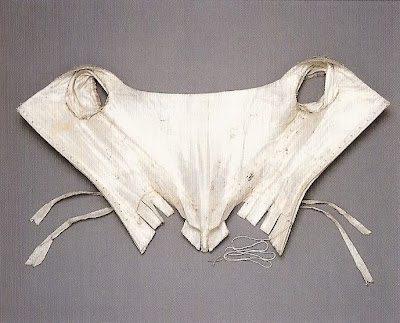 At Nordiska museet in Stockholm there is also a bodice for a robe de cour in white silk, dated to the 1770’s. Unfortunately there are no pictures and it isn’t displayed, but it is described as being similar to the robe de cours at The Armory. It is also described as to have paper glued to the inner layer before the outer layer is attached, to provide a smooth base.

Let’s finish with something that I have often seen discussed. What about the back- it must be hard to fit that bodice so then back pieces meet neatly. That, I think, is our modern sensible at play- a bodice should shut nicely. However, there is this interesting painting that shows the back of two robe de cours. The picture is far too little to make out the details, but I had the chance to stare at it for ages when it was displayed at Nationalmuseum a couple of years ago. In reality that strip of white on their backs are clearly the chemise showing where the bodice isn’t laced shut and it isn’t even laced evenly, the gap is wider at the bottom. Interestingly that is backed up by the description of a presentation at the French court in 1787. Marquise de la Tour du Pin describes the bodice of her robe de cour and speaks of how her chemise, in the finest of batiste, shows through the lacing in the back- at the bottom the gap is “four fingers wide”. The chemise also has very short sleeves, merely “three fingers wide”. Britta Hammar and Pernilla Rasmussen theorize in Underkläder that this gap may have a ceremonial importance, a reminiscence of the Renaissance when you show status with displaying your fine linens through gap and slits in your clothing. 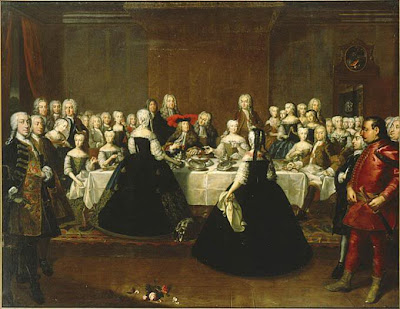 This means that I can happily not have to bother to fit the bodice precisely. I don’t plan to make my bodice an exact copy of any of the extant bodices, but use them as useful templates and inspirations. The robe de cours that I know of, don’t have the heavily based foundation, but are made to be worn over separate stays. Much more practical, but I really would like to make it with the stays built in, so to speak. I’m also very curious on the effect on paper being glued to the inner layer. As I’m not at all waif-like, I probably borrow the iron busk from Lovisa Ulrika to give additional help. One thing I would love to do is to pad the inside with wool to proved comfort. Though none of the roe de cours are said to have that, there are several extant stays in Sweden that have that and I have been curious to how that affect how it feels to wear fully boned stays. 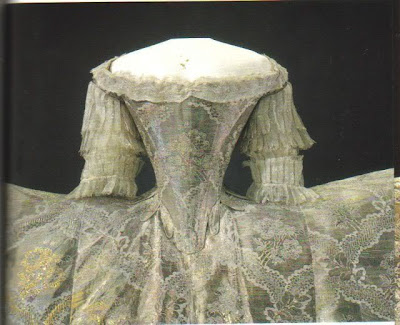 Really good research all around, and I love all of those gowns. The part about the open spaces in the back is especially interesting, and I missed that bit from Lucy de la Tour du Pin.

So many stunning gowns - I'm drooling! Can't wait to see what you make!

Comtesse Olympe: Thank you! I remember getting very exited when I first saw that painting as I had just discussed the subject.

So many detailed photos and links! Thank you!

I've also read about robe de coers having gaps in the back lacing. There is quite a bit on it in 'What Marie Antoinette Wore to the Revolution', but it may be based on the same sources that you quoted.

Dreamstress: You are very welcome! :) I haven't read that book, but perhaps it is. Not unlikely, anyway. :)

At some point I'm going to make a French court dress -- thanks for posting all this fabulous research! Super helpful.

Kendra: I'm so glad you found this helpful!