All in all I am in a very good place right now. Relationship, family, living, work, economy, health, they all work and I’m very happy about it. But there are a few kinks that I’m working on and one is the kick of instant gratification. You get it when you blog- I love getting comments on what I write and it is great for the Ego when I have made something and it gets admired. Instant gratification is around when I shop all those nice things that I don’t really need, and I don’t go over my limit, so why worry. For example- I generally feel that I’m allowing myself the easy way out on several aspects of my life right now and I would like that to change, to give myself what I really want, even if it takes a bit longer and doesn’t get as much attention.


I want to travel more than I have. I want to go back to , , and . I want to see new places like and , for example. And I know that a bit of not spending so much of what I don’t really need would go a long way toward that. As for now, J and I have decided to let September be a non-spending month, apart from bills and groceries. I think it will be easier if we do it together and can cheer each other.


As for blogging, well, the instant gratifications are only part of it and not even the biggest part either. Another reason is because I’m a compulsive writer. I wasn’t always, but ten years ago I saw a picture online that triggered something and I started to write and since then I haven’t stopped. I write stories and I blog because I love to write. It isn’t always easy, but if I don’t write I feel a bit odd. I certainly don’t want to bash blogging, I love it, but I have, for quite some time, felt the need to write something with a little more weight, something lasting. I have wanted to write a book.


And for the same amount of time I have struggled with little demons that tells me that I don’t write well enough, that it won’t be interesting enough and that no one will want to print it, but in the end, what I really feel, is that it doesn’t matter if I’m not good enough for other, because I need to write this for me. Even if no one else reads it, I want this for myself. I have already blown the whistle at Madame Isis Toilette, so some of you already now that I have swatted away my demons and have started writing a book on 18th century beauty and makeup. I have a lot of fun right now, researching, trying out recipes and writing. I want o write a book with accurate history, doable beauty recipes and makeup tutorials and I know that is an interesting enough subject and I will do my best to make it good enough for others to read as well.


But this also means less blogging. I’m not going it up, because I still sew and it isn’t a chore at all to blog about sewing, but other kinds of posts will have to stand back for book writing. Less instant Ego stroking for me, but I think the more long term reward will make up for it.

Email ThisBlogThis!Share to TwitterShare to FacebookShare to Pinterest
Labels: writing

I'm on vacation and hadn't planned to post in a while- Internet in the archipelagio outside Stockholm isn't the best, but this is exiting news and I want to share. I am sure that most of you already know about Kendra of Démodé and have already caught wiff of her upcoming book, 18th Century Hair & Wig Styling: History & Step by Step Techniques. But in case you haven't, then I hope that you feel as exited as I over the chance of getting a book with how-to's for 25 hairstyles. There is a FB-page here.
Posted by Isis at 19:25 No comments:

The shirt is nearing its completion, the only thing left are the cuffs. The sleeves are very wide with only a portion of that gathered at the top of the shoulder. As with the collar, the body of the shirt is top-stitched to the sleeves. 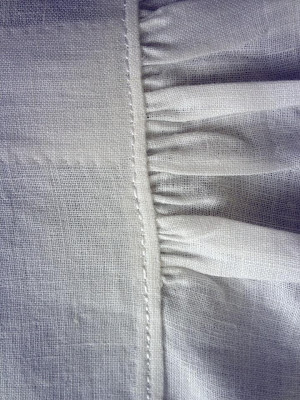 The seam allowance are folded and sewn down invisibly, creating a false French seam. On the original shirt this is done on the side and sleeves seams. 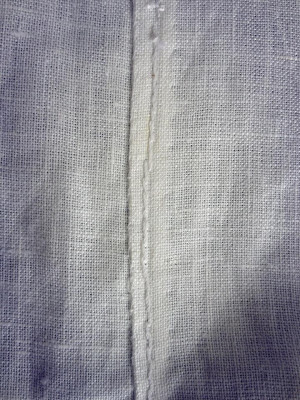 Where the gathers are there is a strip of linen tape sewn over them. Probably because it would be too bulky to fold in the seam allowance. The inside looks very neat. 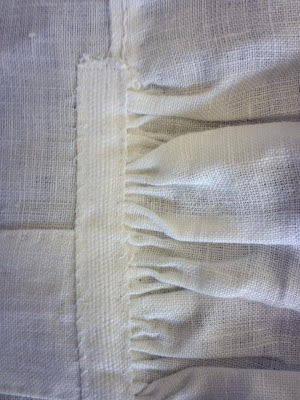 The gusset is a small rectangle, 8X8 cm when hemmed. 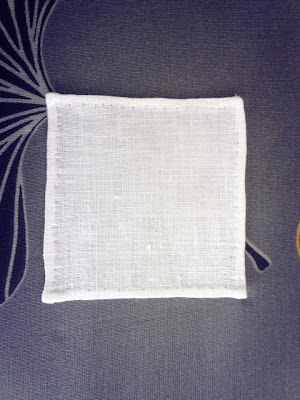 As my fabric doesn’t have selvedges, the fake French seams the original has would be much too bulky. Instead I sewed in the gusset from the right side. I always start with sewing the gusset from the corner were sleeves and bodice meet, first down the sleeves side, and then from the corner down the bodice side. After that I fold it so it meets the other side where the sleeve and bodice meet and repeat. Only I continue down the sleeve seam down the whole way, apart for a 10 cm long slit. Then I do the side seam the same way. As my shirt is shorter than the original one, my side split are much shorter, but start at the same place as the original, 46 cm down. 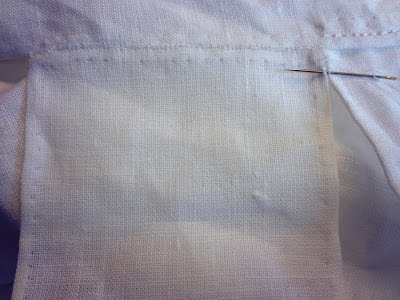 The gusset in place. 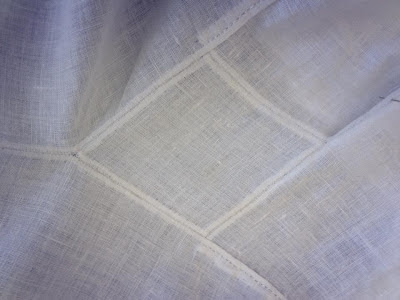 The side split is reinforced on the wrong side with a small rectangle of linen, 3X2 cm when hemmed. 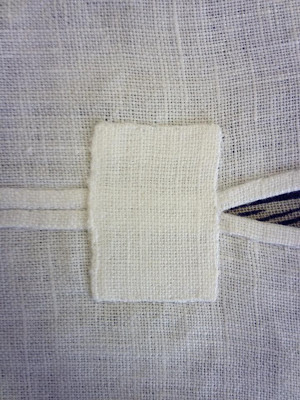 The next post with show not only the cuff, but also the finished shirt.

Ladies and gentlemen in plaid in the 18th century

Once upon a time I heard that there were no plaid, or checkered clothes in the 18th century. Clearly that was not the case, as there actually are extant ones. Not to mention paintings.


Not exactly plaid, but the pattern makes for a checkered look at a distance.


I love this fashion plate and I live in hope that someone will make it one day.


Her apron is clearly plaid, but is her caraco jacket? I think it looks spotted, but some say plaid.


Tartan were around in the 18th century, and evidently not only used for kilts. An article on 17th and 18th century Scottish costume can be found here. 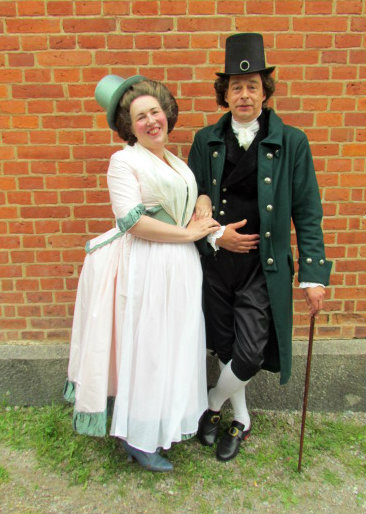 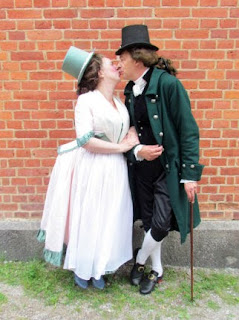 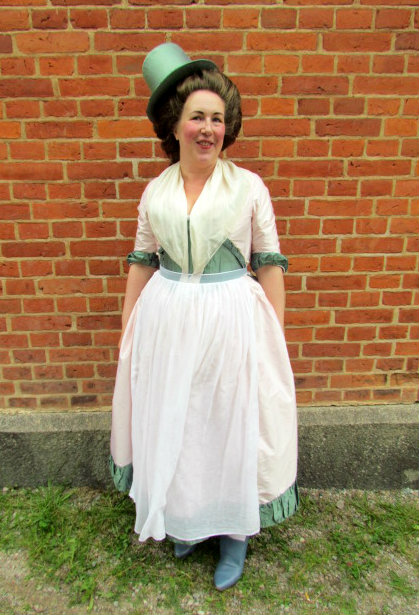 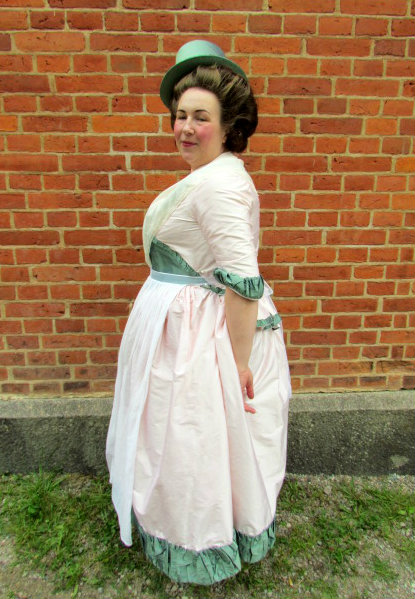 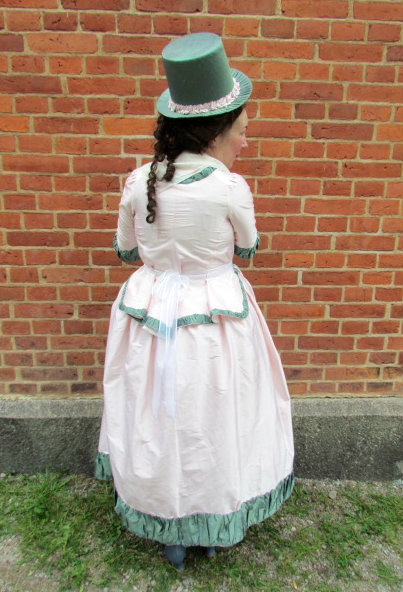 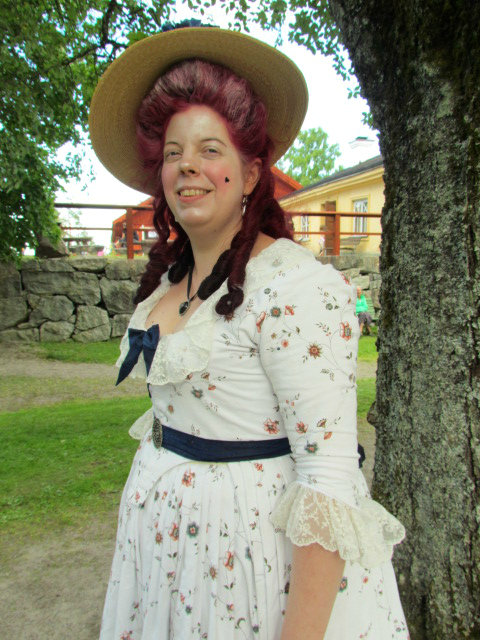 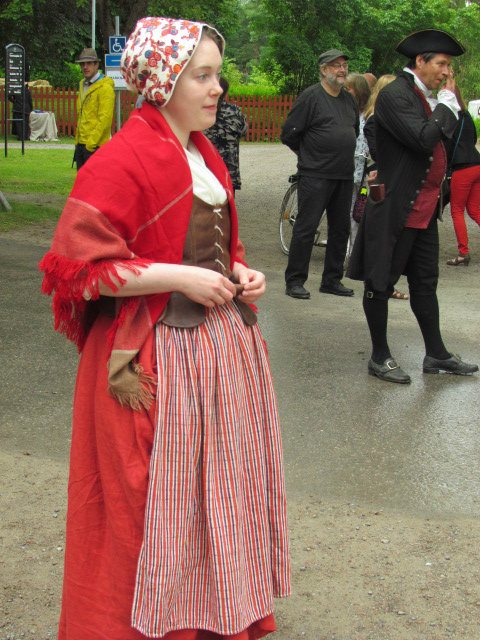 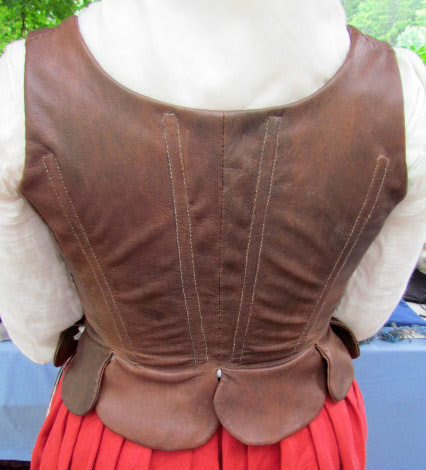 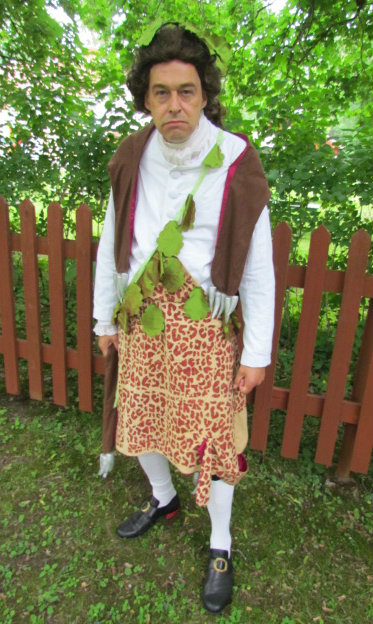 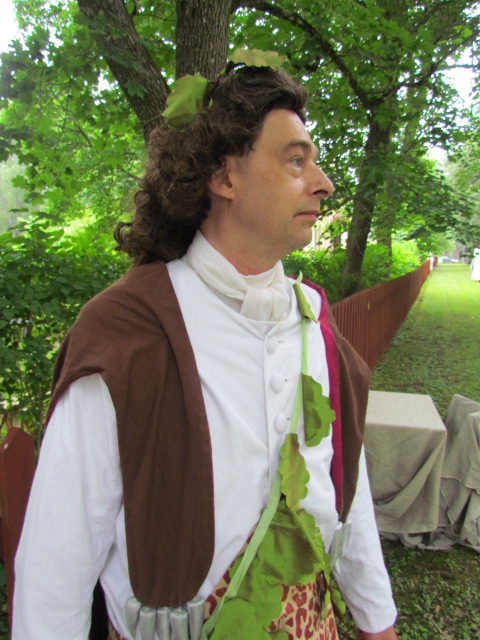 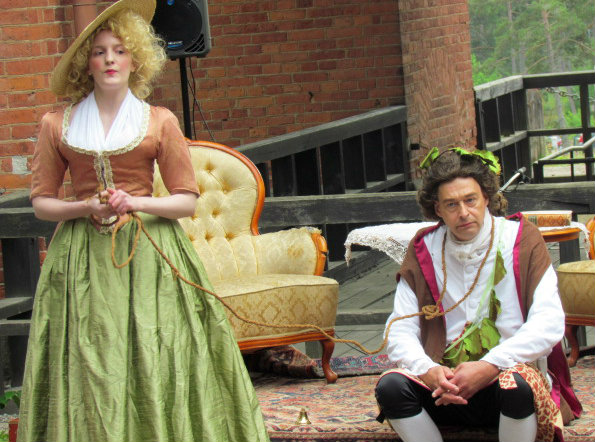 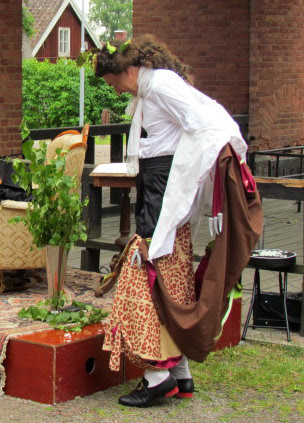 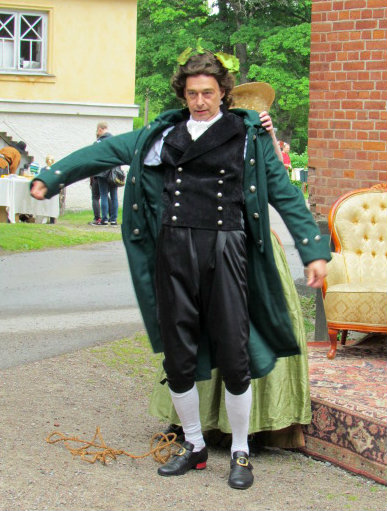 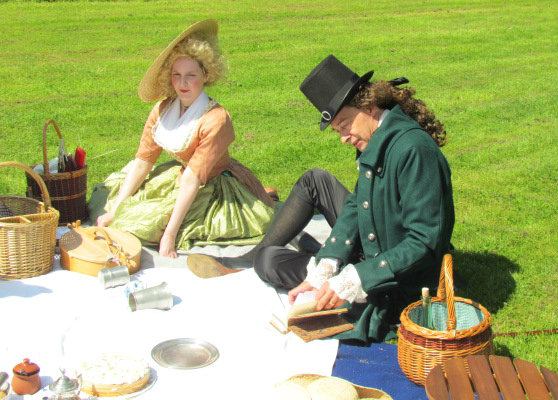 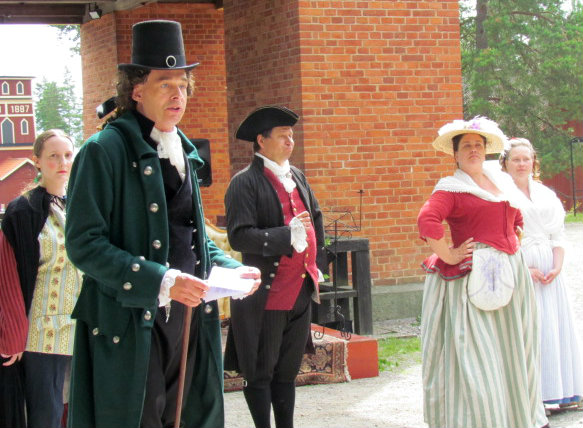 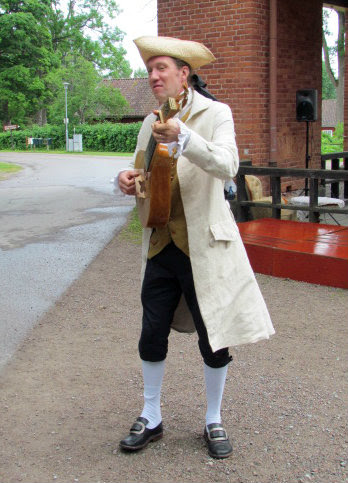 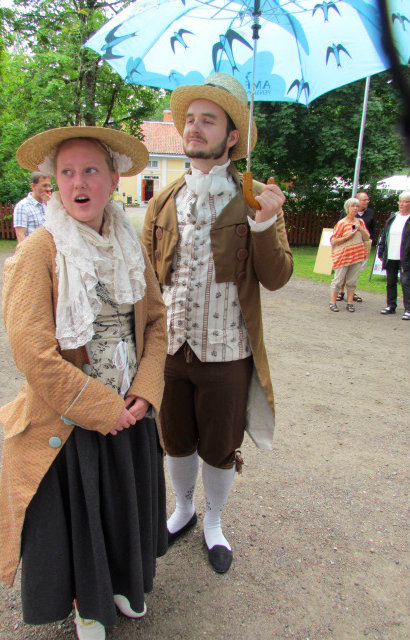