Extant stays from the 17th century

Compared with the 18th century therearen’t many stays still around from the 17th century. There isn’t much written about them either- I suspect there are a buried treasured hidden in museum collections that no one has ever bothered about. Here I have collected information of the extant stays I know about. To not make the post too long, I’ve saved the boned bodices of that period for a later post.

The oldest stays we have are German and dated to 1598. It was part of the burial clothes for Pfaltzgrafin Dorothea Sabine von Neuberg and is described by Janet Arnold in i Patterns of Fashion 1560-1620 (You can also find the pattern in Corsets and Crinolines by Norah Waugh. It’s made out of two layers of linen and one of silk, boned with whalebone. There is a pocket in the front for a busk, laced in the back and, as you can see from the picture, there is no boning over the chest.


The effigy of Elizabeth I that was made for her burial in 1603, ore stays underneath the gown that probably belonged to the queen herself. Janet Arnold dated it to the beginning of the 17th century. 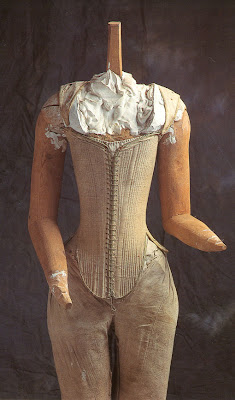 It differs from the German stays in cut and it is laced in front. It’s made of fustian in cotton/linen and boned with whalebone. It’s edged with leather strips that were apple green when new. Drea Leed has made a lovely reconstruction that you can read about href="http://www.elizabethancostume.net/effigy.htm/">here. 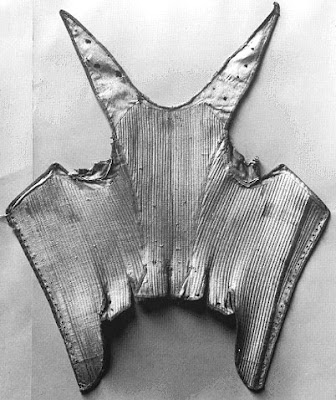 These beautiful stays are English too and dated to 1620-1640. It’s made out of linen and red silk satin and edged with pale blue silk ribbons. It’s laced in the front over a boned stomacher. More information can be found here, but no pattern seem to have been made of it and I have never seen it reconstructed. 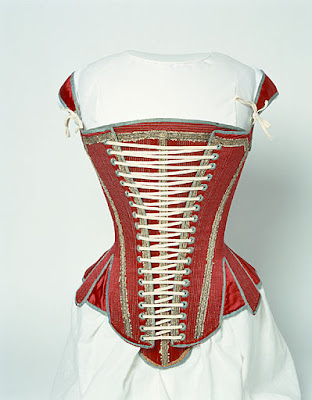 Better known is this pink one with detachable sleeves from Victoria and Albert., dated to 1660-1670. It’s made of linen and pink silk, boned with whalebone. According to the website the stomacher is T-shaped, which I think sound very interesting. It’s seems very likely that it will be analyzed in Seventeenth-century Women's Dress Patterns: Book Two: 2 by Susan North and Jenny Tiramani, to be published in 2012. At least Amazon’s description make it seems so; a pair of stays and a boned bodice, ivory and wooden busks, shoes, a hat, a stomacher, linen bands and supporters, a bag and a knife case. It also features a description of the stay-making process. 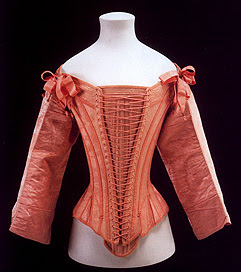 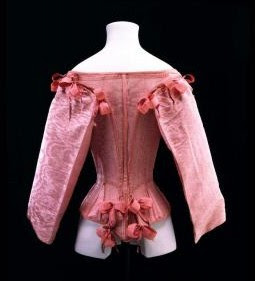 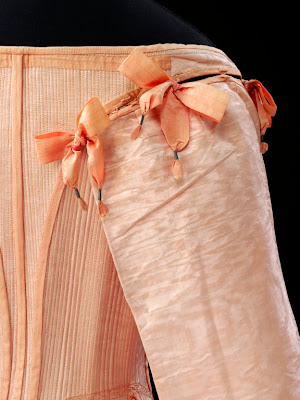 Stays that are thought to have belonged to a passenger on The Mayflower. It can be found at Pilgrim Hall in Plymouth, Massachusetts. Dated by Janet Arnold to around 1670. When new it was covered in yellow silk. More information can be found here, you can also find information about the reproduction that you can see along it in the picture. 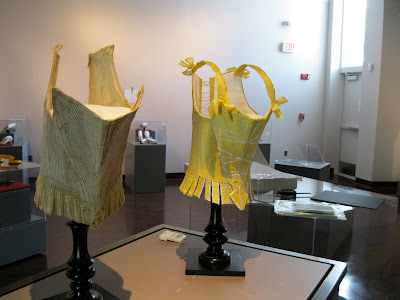 I don’t have a picture, but Corsets and Crinolines have pattern to a pair of stays from around 1701.

And, finally, something I found late at night at Digitalt Museum and, thanks to Madame Berg, has found again; A pair of stays in dark brown leather dated by Nordiska museet in Stockholm to 1720-1729, but on the inside it’s dated to the “Anno 1687”. There is no picture, alas. Wouldn’t it be exiting if it was from the 17th century?
Posted by Isis at 20:18

There are a few stays at the Met that I think are from the 17th (or very, very early 18th) century, based on the cut: here, here, here, here, here, and here. I might be wrong, I'm not the best with dating fabrics, but they look 17th century to me, especially around the shoulders.

Thank you! I guess the fabric may be 17th century even if the stays aren't, but I agree that some may very well be earlier. And of course, fashions didn't just turn on their heel just because a new century came around. :)

Fashion history is so interesting!
xx

Have you heard of the Sittingbourne Stays, dated from 1620-1630s? They were recently discovered: http://www.concealedgarments.org/2010/10/sittingbourne-cache/

Drea: I have Heard of them, but I hadn't seen the article. Thank you!