That was the year that was, in sewing

Well, 2010 will go to the annuals as one of my most unproductive years ever. I have planned and dreamed a lot, but not finished anything since January! On the other hand I have packed, moved, unpacked and had a surgery, so perhaps it's not so odd that I haven't had much time and energy for sewing. That sounded a lot like whining... Still, a little have been made and here it is.

January saw my only complete work, the 1790's outfit, made for the 12th Night ball. At least the one thing I completed is something that I'm really pleased with!

The bag was my first try at ribbon embroidery and spangles. 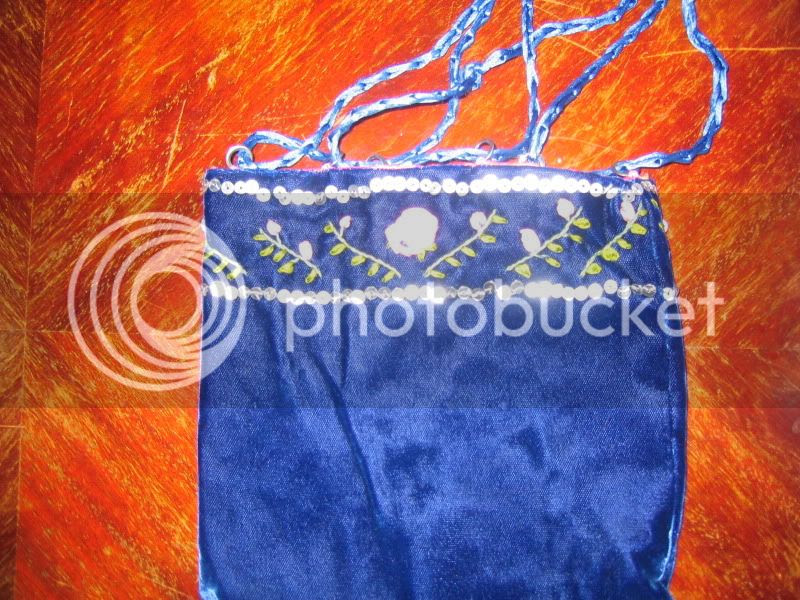 I also finished the embroideries on my embroidered polonaise and also started to sew it together. 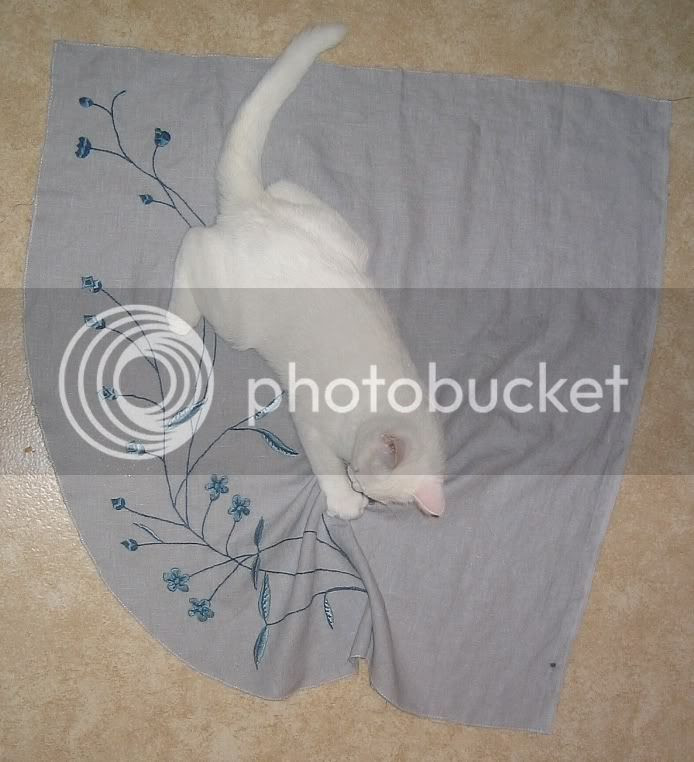 During late winter and spring I very nearly finished a pair of stays. I only needed to attach the shoulder straps and bind them when I moved. I packed the piece of silk for the straps in a safe place. So safe that it hasn't turned up in the unpacking and I think that I might have thrown it away, despite it all. So I will bind them and make them strapless, even if I didn't want them to be that. After all, it is possible to attach the straps if the fabric ever shows up. And it would be a pity to let all the hard work go to nothing. I have worked on, on and off:
A mid-17th century gown. The underlayer of the bodice is finished and the next step is to cover it with the silk.
A robe battante. A first version was almost done when I scrapped it due to time restraints. The second was scrapped due to me not being able to read and comprehend and ordered taffeta with 8 inch wide stripes instead of 8 centimetres...
A bustle in grey fake taffeta- it only needs the metal bands inserted and the waist finished.
A pink 1770's jacket with green trimmings. The trimmings and a stomacher are left to do.
Two modern, well fifties, wool skirts that just need the waist and the hemming finished. I loathe hemming...
A fifties sheath dress in green wool, that I have just cut out.
Posted by Isis at 20:50 4 comments:

I hope you all will have an enjoyable time! Personally I'm going to spend the weekend at work, which isn't exactly the ultimate Christmas... 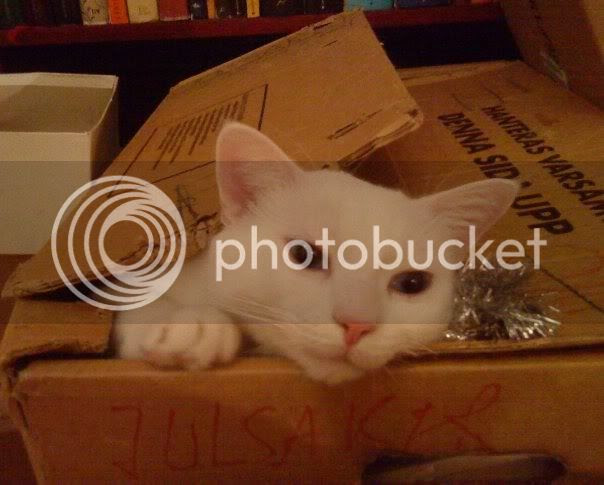 Spacecat Spiff resting among the decorations for the Christmas tree.
Posted by Isis at 15:43 5 comments:

Gustafs Skål is holding a 12th Night Ball, which is a masked ball. I haven't got the slightest clue on what to go as. I don't have the energy to make something new. A large part of my 18th century wardrobe just doesn't fit anymore. So my dresschoice boils down to wearing this one: 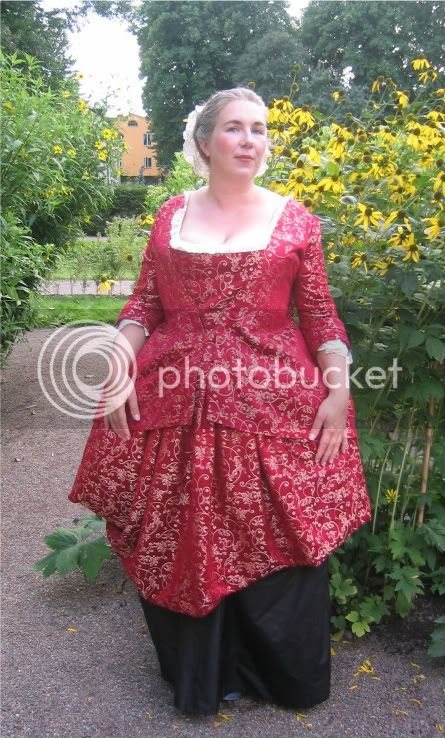 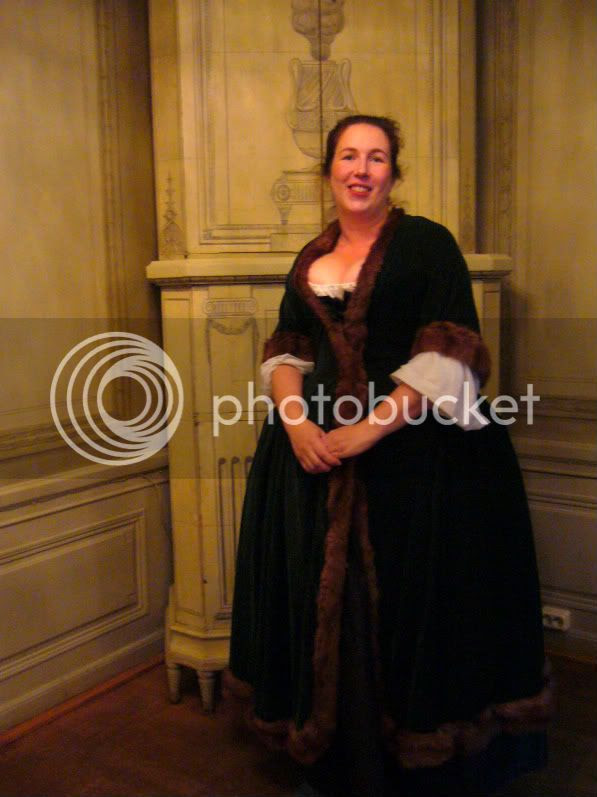 So I'm thinking of sprucing one of them up with a hat and/or a mask. I need to find a theme, though. I guess the green one could be used to go as Autumn or something forestry. The red one... No idea.
Posted by Isis at 13:06 8 comments:

I’m afraid that I don’t have any really good pictures of my hair. I’m not naturally photogenic and I have so far hated ever pic that shoes the hair well, but not my face. My father took these, and at least you get an idea on what it looks like. And you get to see Janne too! I had pincurled it the day before and before I showered I made five big pin curls and then combed it out rather briskly. This is by far the most versatile haircut I have ever had. I have just drooled over a post in corsetmakers on short stays.

Don’t you think that I need one? Considering that I have three outfits from the 1790’s alone. This is more than for any other decade of the 18th century. I’m still in a total funk when it comes to 18th century sewing, but stays are always fun. And as I still can’t finish my 1780’s stays due to the missing should piece… Imagine, a pair of stays without tabs!

I am sewing anyway. I’m almost done with a fifties pencil skirt in grey wool. I just need to hem it.

I need hair advice! I have cut my hair into a forties middy-cut, so now it just tough my shoulders instead of halfway down my back. I'm having a wig made for a 1780's hair, but what to do for the 1790's. Curl it madle and wear it- how? I have never researched shorter 1790's hair. Anyone with a good picture?

And just because a post if more fun when there are pictures in it. 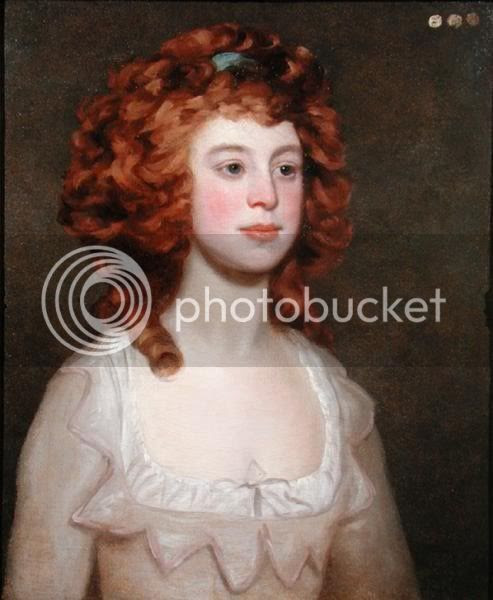 Doesn’t she have a most gorgeous red hair? She must have been quite brave not to powder such unfashionable haircolour away. And isn’t the collar on the dress ugly?
Posted by Isis at 11:07 7 comments: