I have for quite some time been lacking in embroidery projects. Of course, I ought to finish the petticoat to my embroidered polonaise but truth to be told, I'm a bit bored with it. After working on it for five years I would like to do something else for a while. One embroidery project I have been toying with for years is to try to replicate this jacket from Victoria & Albert. 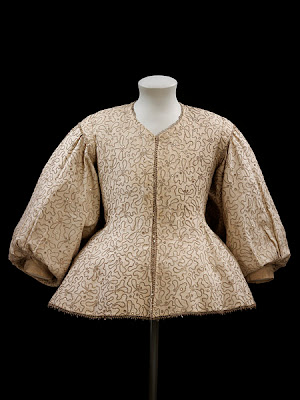 It has always felt like a too complicated thing to do, but in Seventeenth-Century Women's Dress Patterns the jacket is analysed which means I have pattern, embroidery pattern and construction at hand. The embroidery in itself isn't complicated, only wriggly. The biggest problem right now is the fabric. It's made of fustian, but not with wool but with a linen/cotton blend. I'm not sure if that is possible to get and if, if the modern fabric is anything like the 17th century one. Perhaps I should just use linen, which is, after all, used on other jackets from the same period.

I'm currently on vacation at the summer house, but unfortunately the weather isn't that great, which means my son is bored to his teeth and we are watching a lot of movies. So I'm hand-sewing an 17th century shift. It's in linen gauze and the construction makes it impossible to use the machine. Quite boring work but not hard and I'm sure it will be very nice when it is done.
Posted by Isis at 13:04 8 comments: