Johannaelisabet is working on the pierrot in Kvinnligt mode and said she would be happy to see some of my version of it. The original is made of a striped cotton/silk blend, mine is just striped cotton. I didn't have much fabric, so I made no try to match the stripes, though I accidentally did a very good job on the sleeves. The lack of fabric is also the reason why the frill has the stripes going in the other directions. It's also still a work in progress, the sleeves have no cuffs and the front is pinned shut instead of buttons. I need to do some alternations, as the front is both too wide and to high at the top, and the waist is a little bit too low. Incidentally you can also see how different underpinnings makes for a different silhouette.

Here’s the first time I wore it. I had my chemise a la reine underneath, which made the silhouette pretty straight. 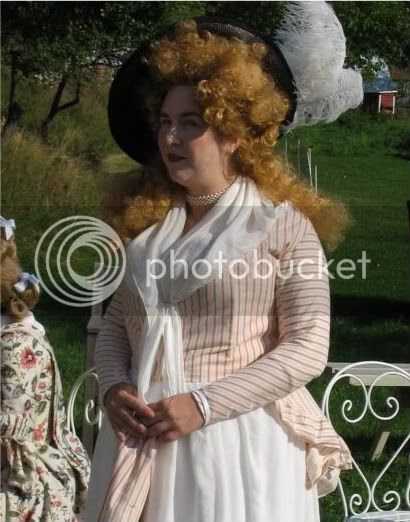 No bum-roll made the basque slope down rather sorrily. And considering I have a narrow back, I look rather broad. I'm wearing it over me red linen stays that were to wide in the back, and I think that shows. 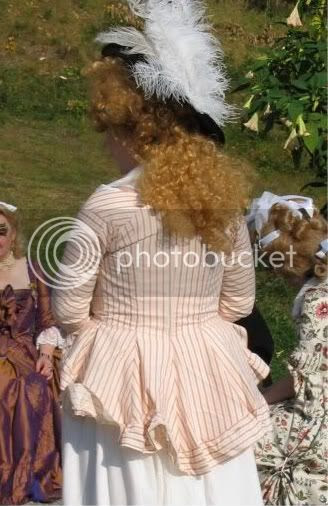 My weight is about the same here, but with another pais of stays, and it shows. No bumroll still, but several petticoats. (Don't mind that my cap is trying to escape, please.) 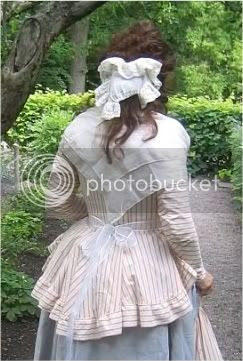 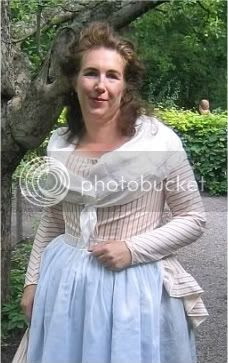 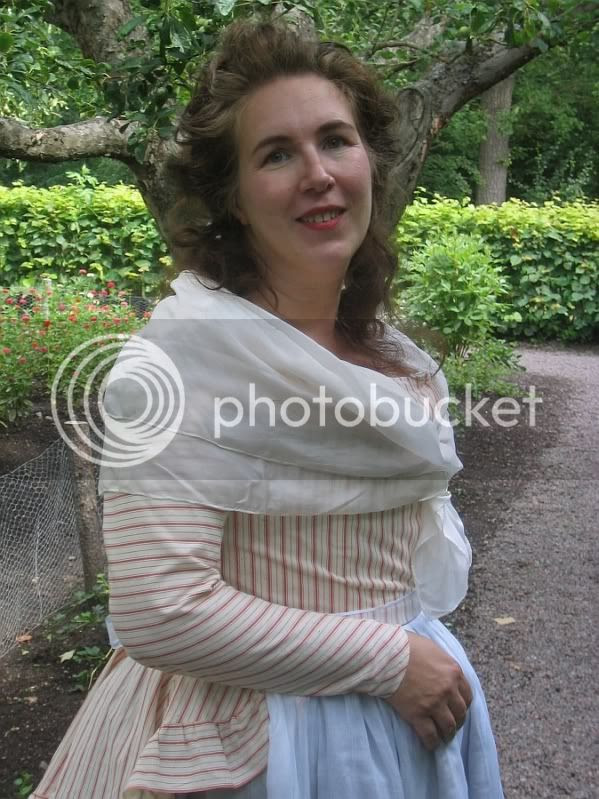 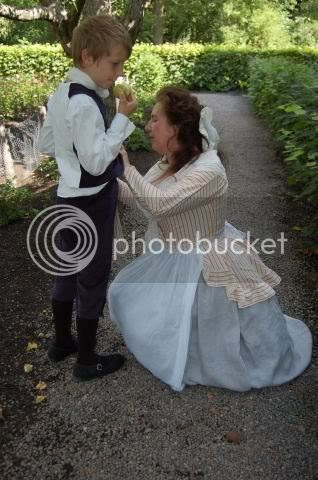 And finally with a bumroll, which I think improved the silhouette even more. The history of stays

My history, that is. I’ve made several and I feel the need to make an overview. I hope you feel it entertaining. Perhaps even useful… My first pair was the Diderot stays pattern, which I found at La Couturière Parisienne. I started on those back in 2000, before I joined Gustafs Skål. I had made stays for theatrical performances before, using the bodice of a polonaise in Janet Arnold’s Patterns of Fashion. They were made without much guidance at all and wasn’t aimed to be historically accurate at all. No tabs, metal boning and not very boned at ll. So I wanted to make a pair that was historically accurate and hand-sew the thing. Green linen with blue linen-thread for the boning channels and blue silk for the lacing holes. They were very pretty. They were absolutely awful to wear. You see, I had no idea at all how to fit stays at the time and they were too long and too tubular. I had also boned them with MM, because that was all I could get my hand on then. Despite the flimsy boning the shape still gave me bruises over my ribs, that’s how poorly fitted they were. I considered re-boning them with something sturdier, but decided not too.

Having put all this work into something that I had to discard, made me very reluctant to put much work into my next pair. Indeed, this is what I’ve done since; made a pair that have been wearable but quick and ugly that I have used for a long period, before trying to do something pretty. For my next pair I tried a new pattern, the front- and back laced stays with a stomacher from Norah Waugh’s Corsets and Crinolines I made them out of two layers very sturdy twill. I boned them with plastic whalebones. 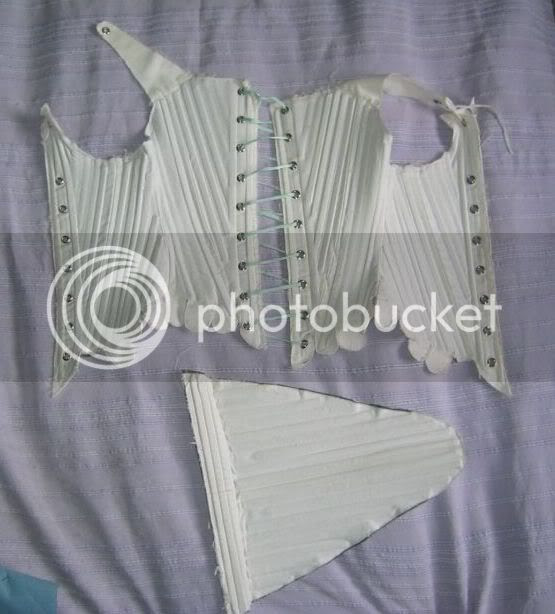 They were much better, but I needed to tweak them, shortening the waist and making the stomacher wider and a bit longer. I decided to make them in very nice red linen with white boning stitches. I used white linen tape to bind them, and a lot of fussy work that was! And as you can see, it was pretty impossible to make it lay flat. They were boned with plastic whalebones, but in the back I corded every other channel, which still made them sturdy, but breathable. 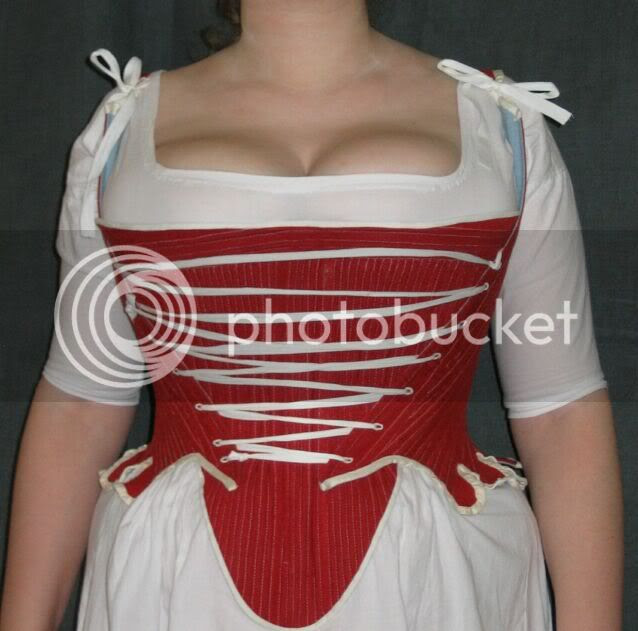 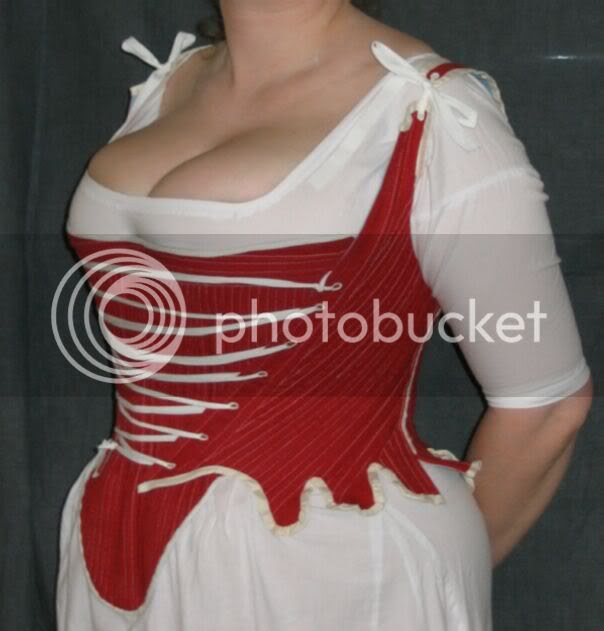 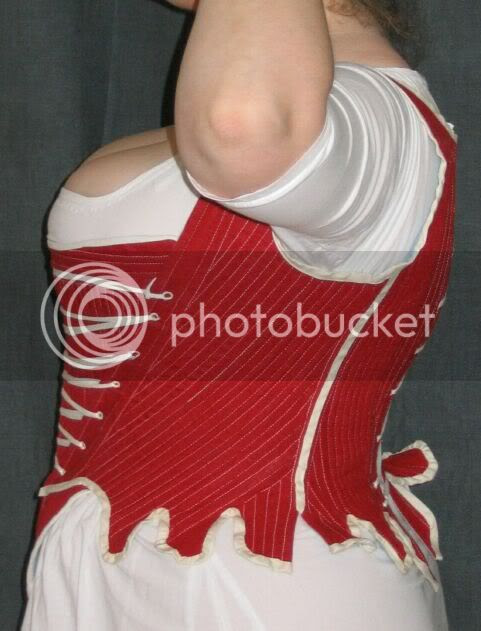 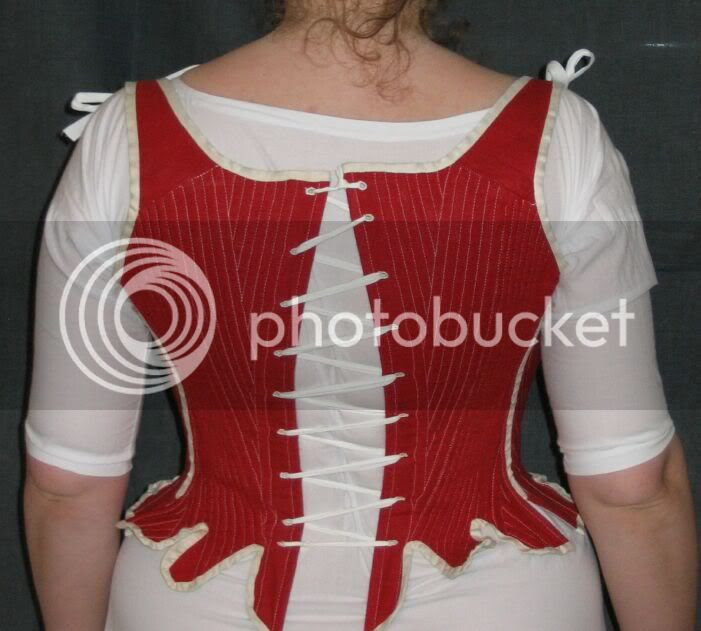 I really liked them, they were comfortable and pretty, but there were still fitting problems. Still a bit too long in the waist and too wide in the back. I also found it fussy to put on with the stomacher and a bit hard to get it to look right. So I started to experiment with other patterns. I tried out the Corset Pattern Generator and got a functional pattern. 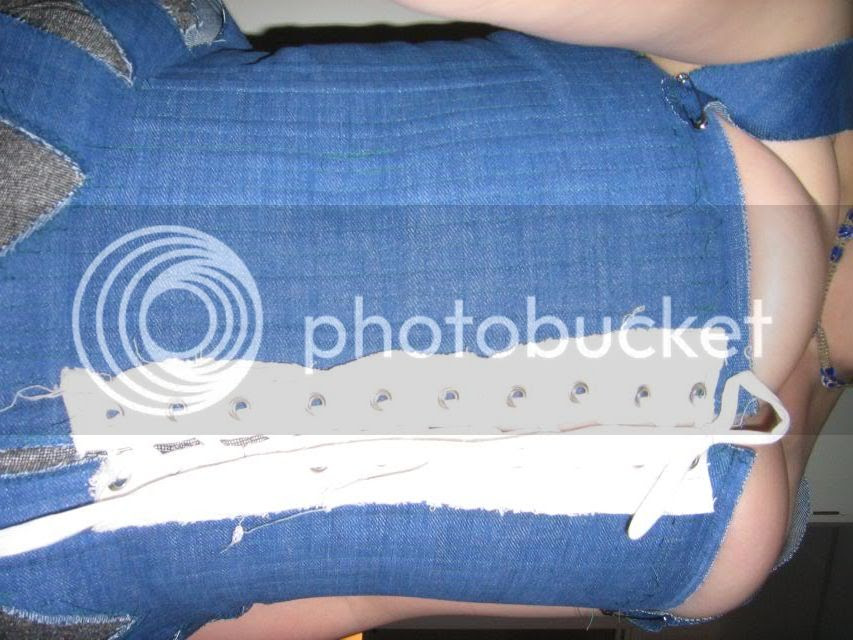 However, these are 16th century stays and the shape then was not as conical as the 18th century. Being quite conical to begin with, I found that the straight shape didn’t suit me.

The next patterns was a variation of the shape that seems to have been very common. Very much like this, only number one and two are one piece. I made them quickly out of black denim. 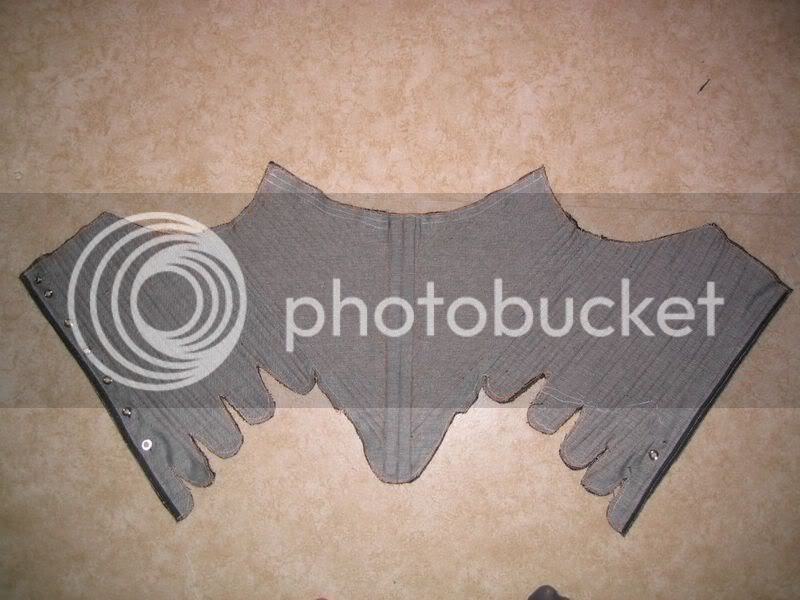 And just to see how it would look to cover it with a fabric that don’t have boning channels, I covered them in golden silk taffeta. 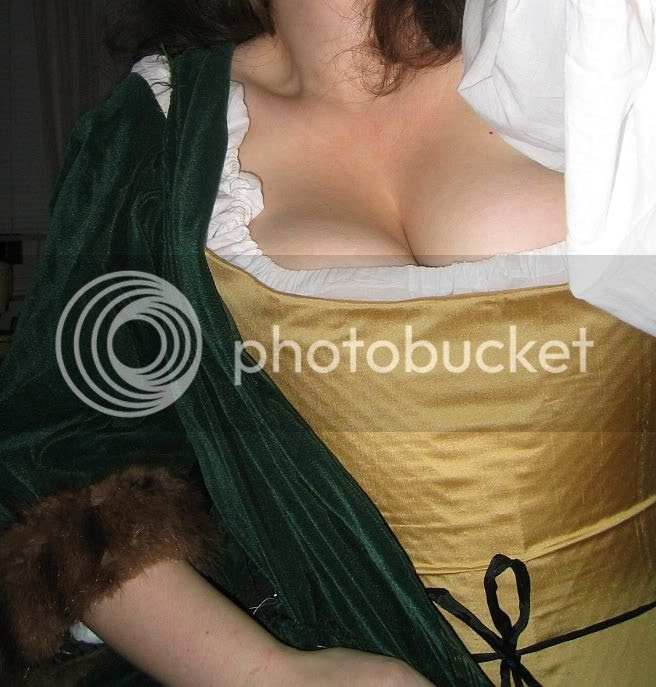 They were still better than the pair before, but I made them and then lost a lot of weight and they were suddenly they were much too big, bringing me to the pair I currently wear. 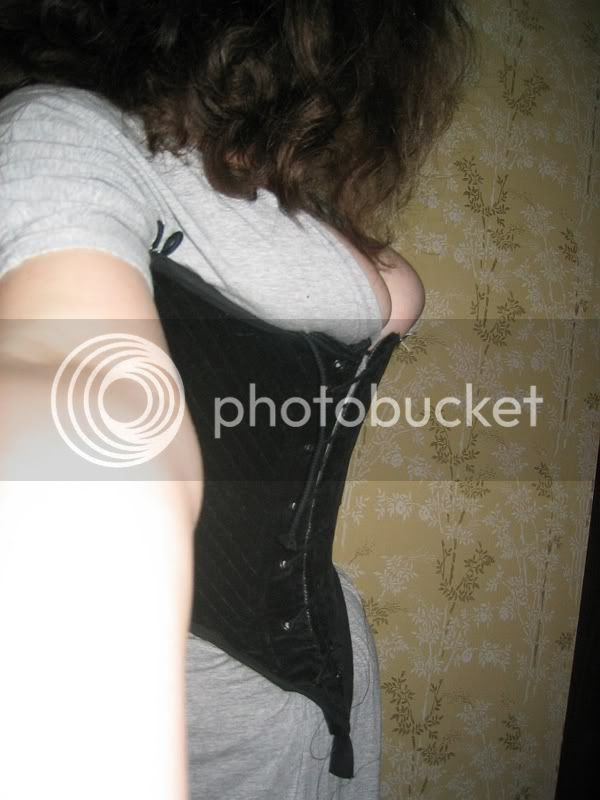 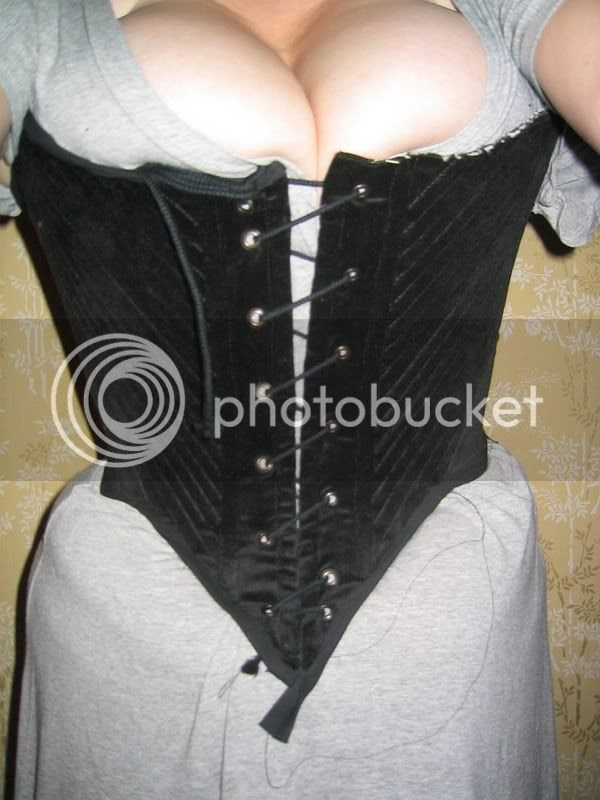 They were made out of one layer of black denim and one of upholstery velvet. I made them without shoulder straps, just to see how that worked out and I made them laced both in the front and the black. I was a bit lazy and re-drafted it with just two pattern pieces instead of four. They turned out very well that I have been trying them out for two years, but now they are too big as well, so the time had really come to make a new pair.

Though not having should straps have worked well, I definitely feel that I want them. My breasts have shown a tendency to “float away” towards the sides, so I want the straps to keep them were they are supposed to be. I also felt that I needed to lengthen them a bit in the front and place the tabs in the fronts a bit different. I also needed to make the pattern a bit smaller. As I still shrink, they will still be laced both in the front and in the back. As I like to make clothes that could have been worn in Sweden I looked at extant Swedish stays. They seem to look just the same as stays do elsewhere. They can be laced in front or in the back or both, with or without a stomacher. I also looked in Jill Salen’s Corsets for inspiration and found the brown jean stays, dated around 1780.. The patterns looked quite like my pattern and I liked the look of the boning channels and the square tabs, so I decided to re-draft my pattern with that on in mind. 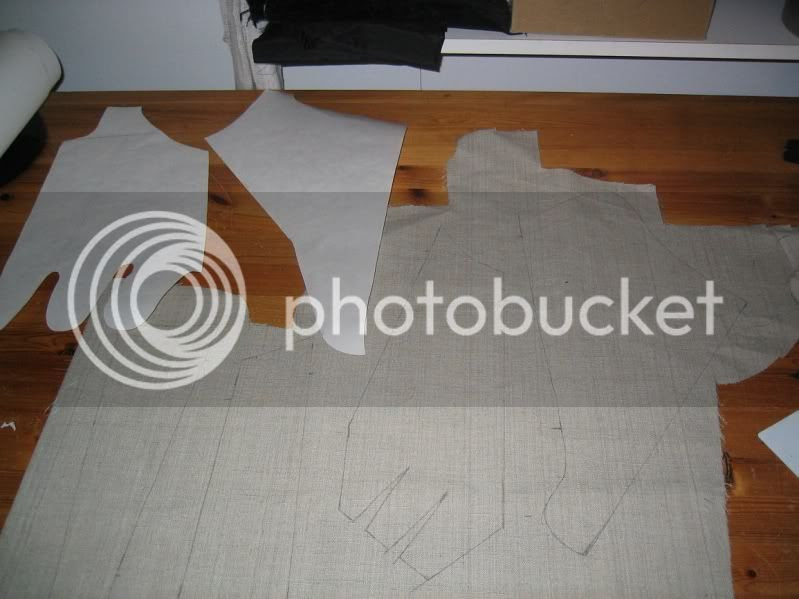 A thing that I liked with the brown jean stays are that the front piece is cut on the bias. I’ve never done that before and I’m curious to see how that will affect the fit and shape. And as my shape is a bit different, the number of tabs and the exact placement of boning channels didn’t work out for me. Another thing I liked was that the centre front piece is slightly curved at the side towards the side front piece. So, now everything is set (and started) for the next pair.
Posted by Isis at 12:19 6 comments:

I feel the need to gush! Look at these spats, that Chronographia
have knitted, aren’t they awesome? And their mine! Well, they will be mine very soon. 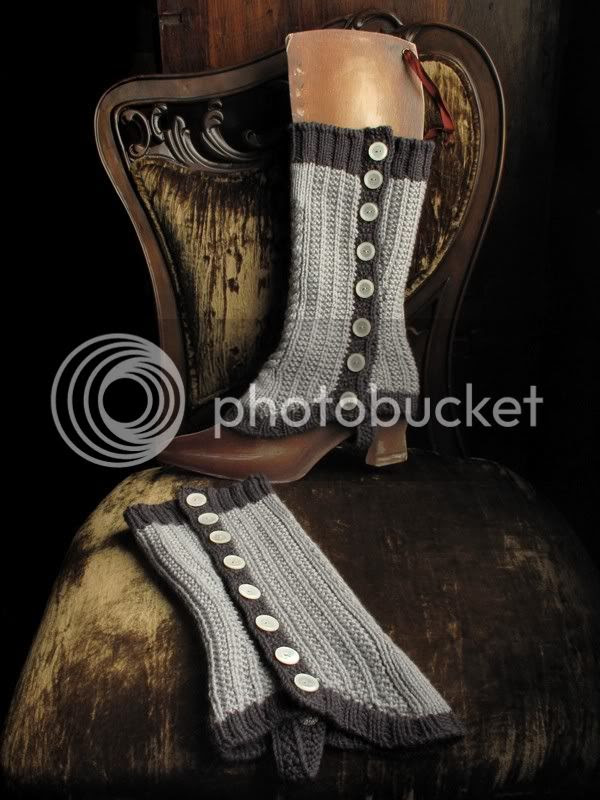 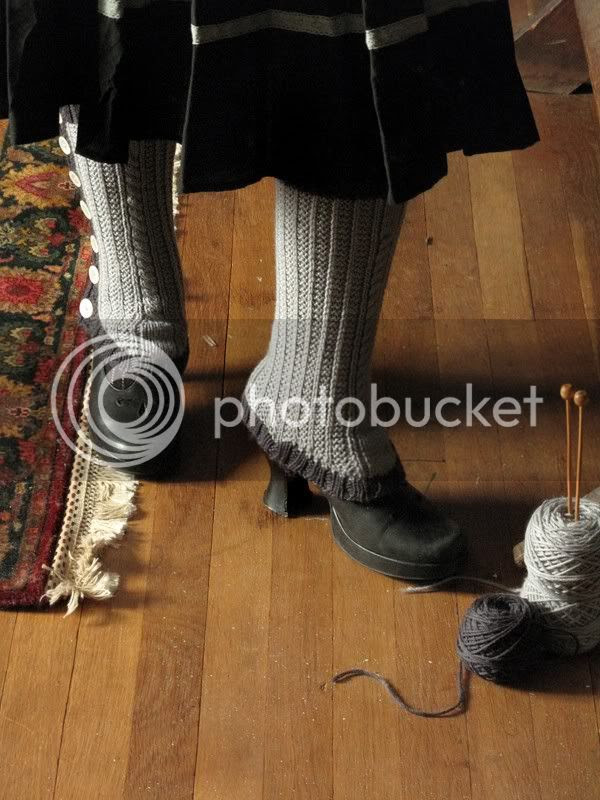 I plan to wear them when the snow has melted- spring can be pretty cold after all. She also makes the most awesome knitted hats- check out the Etsy shop. I grew up with Elsa Beskow’s picture books (which Swedish child don’t) and some of the hats would fit right into it. I also urge you to check out Strangehours and look at her graphic design.
Posted by Isis at 17:43 6 comments:

Email ThisBlogThis!Share to TwitterShare to FacebookShare to Pinterest
Labels: spats

I’m moving in the end of April, which you may have gathered , so I need to revise my sewing plans. With an apartment to prepare for selling, then to actually sell it and then pack all my stuff, I feel that I have to put all bigger projects on hold. However much I want to finish my candy-cotton outfit and Gustaf III’s national suit, it feels like way too much work. But I do have a number of projects that are in an unfinished state, so it seems like a very good idea to work on those. First out, of course, are my stays. 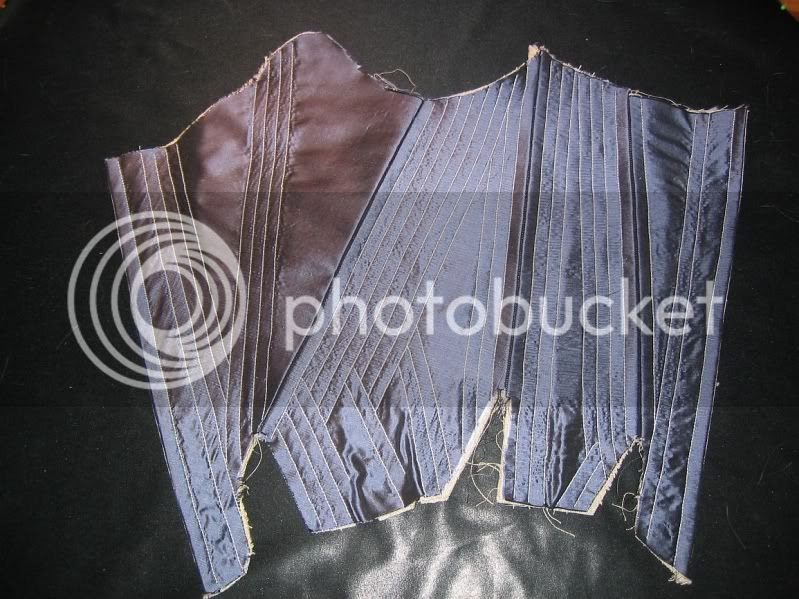 I’m sewing lacing holes at the moment and then I have to make the shoulder straps, bone them and bind them. I would like to try to do that with leather as I’ve never tried that.

I have my two modern wool skirts that need to be hemmed and I also have this summer frock.
Posted by Isis at 08:50 2 comments:

I finally got a decent picture of my blue 1950’s dress. 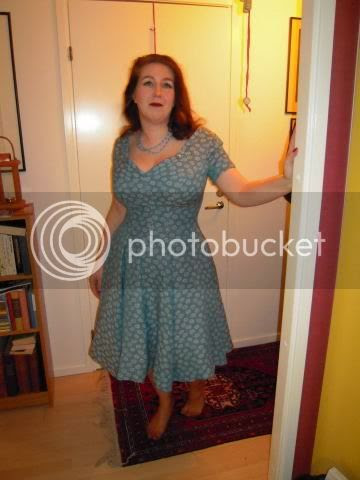 It’s a Vintage Vogue pattern and I’m quite pleased with it. I made it when I was bridesmaid for my sister, but I was running out of time and omitted the sleeves for that occasion.

When I wore it first I just have one of those “slimming” bodices underneath and a petticoat. Actually one of my mother’s 50’s petticoats.  Last time I wore it I had an underbust corset underneath, which improved the fit vastly, and I didn’t laced down much. I think that may be because the pattern is from the 50’s and back then women did wear foundation garments and the patterns naturally reflected that.
And here are a few other pics. I felt very pretty that evening and I think the photos reflect that. 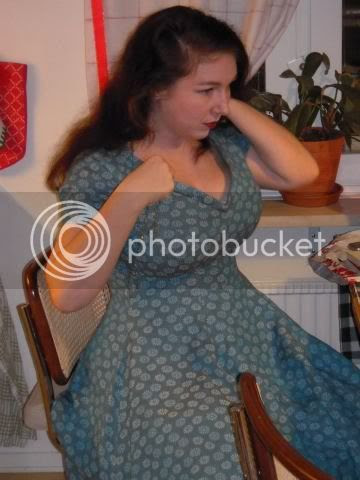 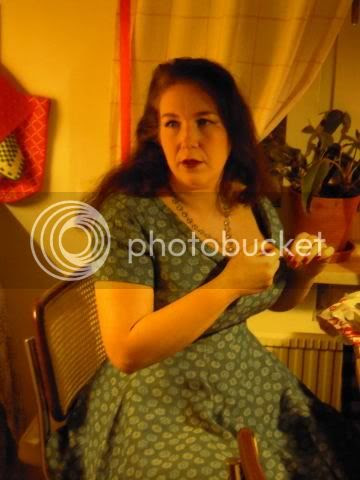