After finishing three 18th century projects this year, I feel a bit tired of that century. I want to focus on my forties wardrobe and I want to finally get a 17th century outfit. Two, actually, J need one too. I have a dark purple taffeta that I plan to make into a bodice and skirt, based on the one at V&A I posted about here. I’m going to simplify it a bit and forego the slashing and pinked edges, making it look more like this one. I like the plain collar and there is a pattern for a similar one in Janet Arnold’s Patterns of Fashion 4. The gown is terribly low-cut, though. Judging by the curve of her breast the nipples must be over the edge of the dress, though they are hidden by the linen band. For my 21st century sensibility that feels a bit risky, not to mention that my bosom needs a bit more support. So I will raise the neckline accordingly.
Pearls stringed like this can be seen on several portraits, which are pretty but seems a bit fragile. Here you can see that the pearls are just decorative; there is a pink ribbon that does the real job of holding the bodice together. I think it is worn over a white stomacher, though I guess it could be just the chemise. A stomacher seems much more likely, if one look at the fashion for the time, though. In either case, I will make a stomacher, either white or in the same fabric as the gown. I’m keeping the bows, but haven’t decided on the colour yet, even if white is pretty. 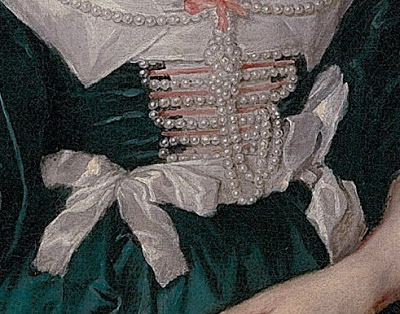 The cuffs are ruffled, but plain. One of the reason this painting appeals to me is just the absence of lace. Finding the right lace would add to the cost of the gown, but that’s not really the reason- I just like the plainer elegance of the collar and cuffs on this gown.
The first step, though, is to create a pattern. I could enlarge the pattern in HH, but that would demand heave alterations. Instead I will use my 18th century stays patterns as a base and then re-draft it with the 17th century pattern as a guide. 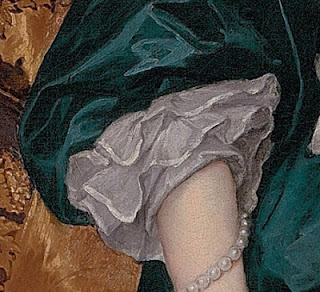 The first step in J’s costume is the skirt. In Patterns of Fashion 4 there is a pattern for a skirt worn by Admiral Claes Hansson Bielkenstierna when he was wounded in 1659. It appeals to me for several reasons. It’s Swedish and of the right time period, but it is also a plain and practical skirt, even if it was worn by a nobleman. The picture Livrustkammaren provide is very bad, as you can see, but if you check Arnold you can see that even if it is plain, it has a funny little spider web detail at the bottom of the front slit.

More on stays with sleeves

My sleeved stays are progressing nicely, which they have to as I need them finished on Thursday. It is a bit difficult to get an overview as I’m working on several parts at once. Sewing the brocade on the stays is fiddly and best made at home and when I’m not tired. The petticoat, on the other hand are perfect to work on when I do feel tired and the shoulder straps and sleeves are small enough to take with me. So today my tally looks like this: The stays have 2 ½ pieces of brocade left to finish and then the shoulder straps need to be sewn in. The shoulder straps are halfway done. The sleeves are finished apart from the lacing holes. The petticoat is hemmed, but need to be pleated and attached to the waistband. 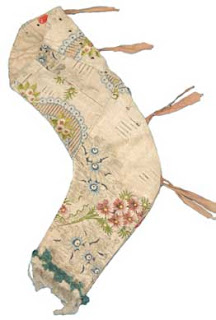 But right now I’m taking a sewing break and show you a few more sources for stays with sleeves. The picture sources I have found are still Italian or French, but I have found a few written sources that are British. In “The Gentleman’s Magazine” from 1791 there is a letter that mentions “stays or boddices with sleeves”.The 1790’s seems a little late for this fashion which seems to belong to the first half of the decade, but the letter writer says this happened several years previously, so we can’t be sure of the exact year. Thanks to justawench on LJ I found Old Bailey Online and when searching for sleeves found several cases of theft where separate sleeves have been stolen. I don’t know what they are supposed to be attached to, if it is stays or not, but up until the 1750’s they emerge quite often. They are usually not described, but sometimes they are mentioned to be of linen or Holland or once or twice cotton. One pair is described as lac’d, but if that means that they are meant to be laced on or have lace on them, is unclear. It is also uncertain if they are worn by both sexes. Some are stolen from men and some from women, which may not mean much, but in one case they are said to be women’s sleeves. Not exactly on the topic of stays, but the further in into the century you come, sleeves that belong to shift turn up again and again. What does that mean? That you habitually changed sleeves of a shift when they got too worn but the body of the shift was sound? I have no idea.