This is mainly of interest for those able to speak Swedish.

Once upon a time, the Society of Gustafs Skål had a small member paper, Tidsfördrivet, where anyone could write. There were reviews, recipes, accounts of thing the society did, and so on. A number of years ago the paper died, but has now caught up with more modern times, in the form of a blog. All members are welcome to participate and hopefully this will be a good venue for news and other interesting things.

http://gustafsskal.blogspot.com/
Posted by Isis at 12:21 No comments:

You know, you really are a complete costume geek when you find yourself saying something like;

And no one stares blankly at you.

I was at friends last nigh and spend an absolute orgy in costume talk. So much fun, but the hour got quite late, and I’m tired today! So I’m browsing about and dream of fabrics. I’ve said to myself that I shouldn’t, really shouldn’t buy more fabrics. But, and you know there was a but coming, what I have in my stash are mostly fabric for the 18th century, and I want to make some contemporary clothes. So I think I shall but some wool to make a couple of warm skirts and I want to sew that raincoat. At the moment I can’t decide if I want one in wine:

Or in a retro pattern:

Email ThisBlogThis!Share to TwitterShare to FacebookShare to Pinterest
Labels: raincoat

I’ve been given an award by Madame Berg. Thank you! Evidently I have to nominee people now, but I’ll have to think about that.

I’m making some changes in my sewing schedule. The Vauxhall will be in three weeks and I will finish my gown before the Regency stays. Why? Because my gown was made in 1797, and it’s quite likely that it was made for 18th century stays. I wanted Regency ones because of 1809, but the timeframe for the Vauxhall is 1772-1809. If I have the time I will finish the later stays, if not, I still have a gown. In Kvinnligt mode the cut of the 1790s round gown and one of the Regency gowns are very similar, apart from the length of the bodice. I’ll cut the 1797’s gown somewhere in between and then I think it can be worn with both kinds of stays. Truth is that with my well-endowed high-waisted body, the waist of a Regency gown would probably be lower than for someone slim and small-chested, anyway.

I’m happily reading my book about Gustaf III’s national costume, and I’ve decided to sew the common gown. Partly because everyone who has it in Gustafs Skål has the court version. 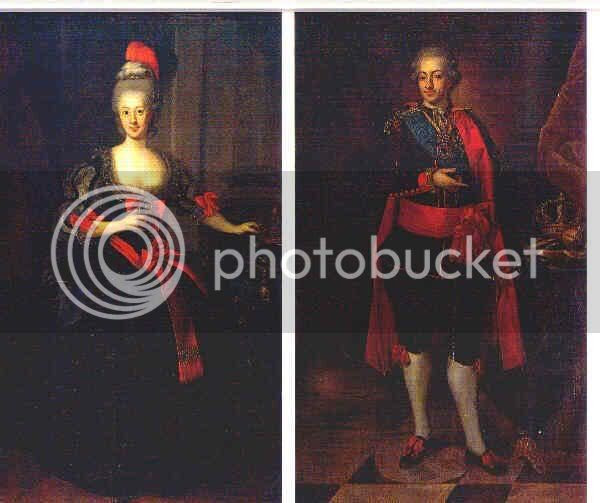 Also because that even if we don’t have personas in Gustafs Skål, I’m aiming to make clothes a woman of my family could have worn. And this means very well to do, upper-class that married into nobility, but lived in the province of Värmland, far from the capital. Which means the common gown with black sleeves instead of black-and-white, shorter train, and with the train up at four points.

The only preserved national gown is just a common one. 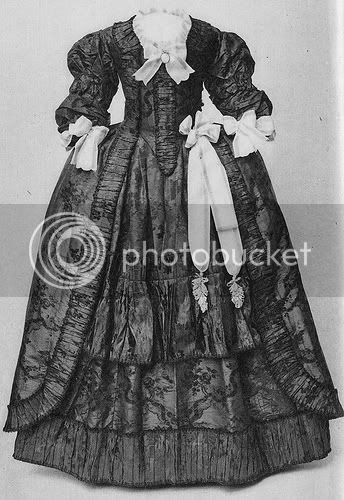 I’ve long wanted a book about Gustaf III’s national costume, Studier rörande Gustav III:s nationella dräkt by Eva Bergman, that was published in the thirties. Last week I found it online for basically nothing- it’s not hardcover, but in very good shape. I got it yesterday. Yay! Now I have no excuse whatsoever for not making it. I have the fabric, I have the pattern and now I even have the book. I’m aiming to have it done to the 12 night ball Gustafs Skål will have in January

I tried my Regency stays the other day and the good thing is that it fits very well over my waist and hips. It’s the first time I’ve tried boning with reeds, and they seem to work very well. I put boning channels beside the busk and on both sides of the front side-seam. And on both sides of the lacing holes. I thought I would need more boning, but it seems not. However, the cups are another matter. I definitely need to cut the front higher and also widen the gussets a bit. They work, kind of, now and I will follow
Posted by Isis at 07:59 7 comments:

While sewing boning channels in my regency stays I did a stupid mistake that I really know better than to do. I put a big unsightly scorch mark at the front of the stays. While I hadn't planned to prance around just in my stays, it really bothers me.
Posted by Isis at 14:43 4 comments:

More than the 18th century 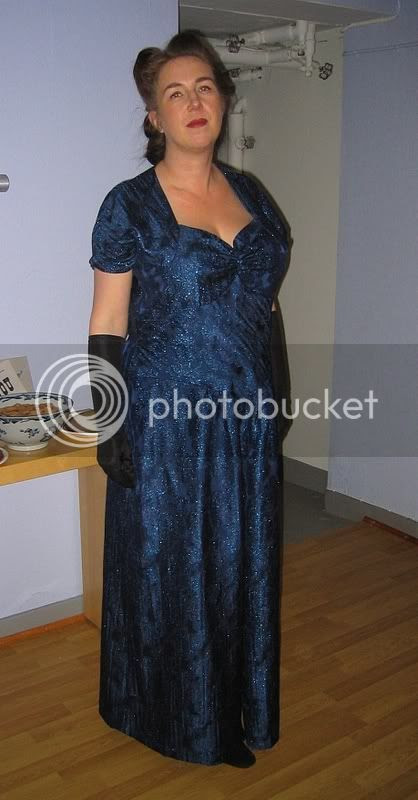 It was a lot of fun to sew and I felt I wanted to do a short version, when I found the right fabric. And at a visit to Carina's fabric shop, I found the fabric. Rather surprising actually, as it has flowers on it. And I'm so not a flowery fabric person. But it spoke to me, and I bought it, and when I dug out the pattern, I understood why. 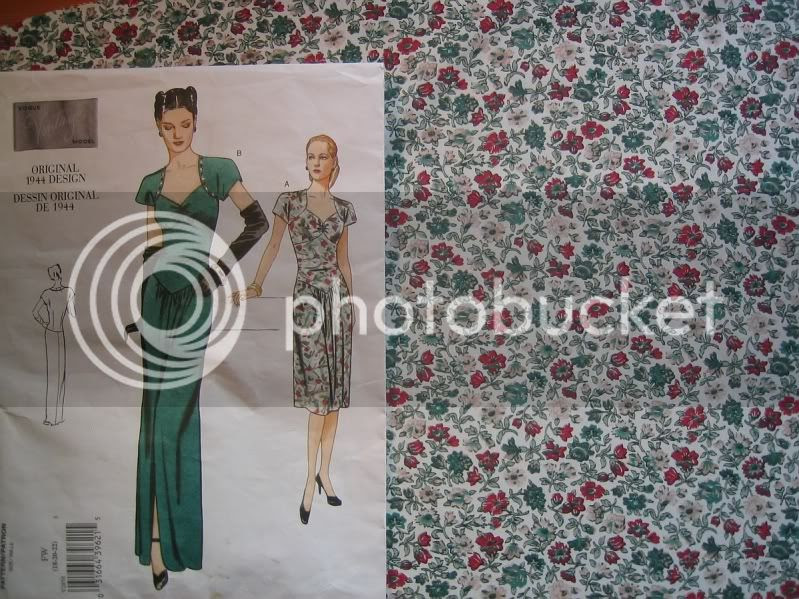 My sub-conscious mind has obviously a much better memory than my conscious. It's rayon, though, and pure hell to cut and sew in, so I'm still working on assembling the pieces.

Other news is that I'm sewing the boning-channels on my Regency stays. I'm nervous of the fit- it's the first time I've sewn something with bust gussets. And I think it may be cut too low...
Posted by Isis at 21:21 7 comments:

Last Sunday I attended, along with a number of other members of Gustafs Skål, an 18th century market at the Linné garden in the town Uppsala. I won’t tell you who Linné was, if you don’t know. Go Google and be ashamed of yourself! ;-) It was a rather nice day, not too warm, but a bit windy. The market itself was nice enough, but it could have been more stalls. The garden was absolutely lovely and it wasn’t difficult at all to stroll around there for six hours. After closing we got a personal tour of the Linné museum and then we had a party in what used to be the greenhouse. Not the glass kind, but what looks more like an ordinary house. In Swedish it’s called “orangeri”. Could that be an orangery in English? I also had the opportunity of meeting old and new friends, which was very nice. 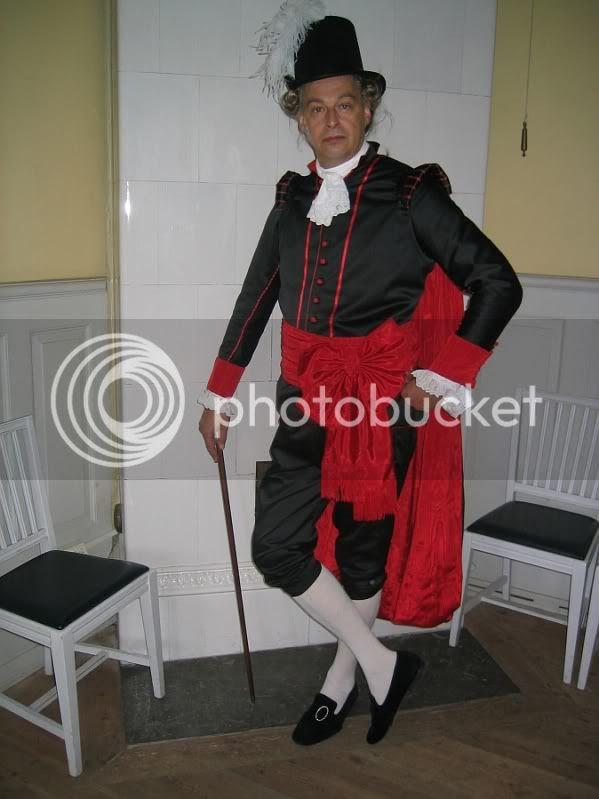 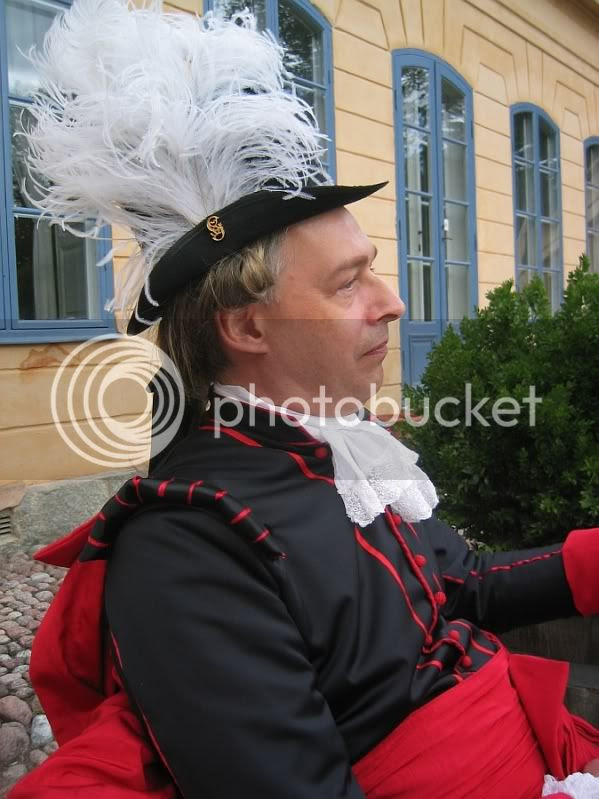 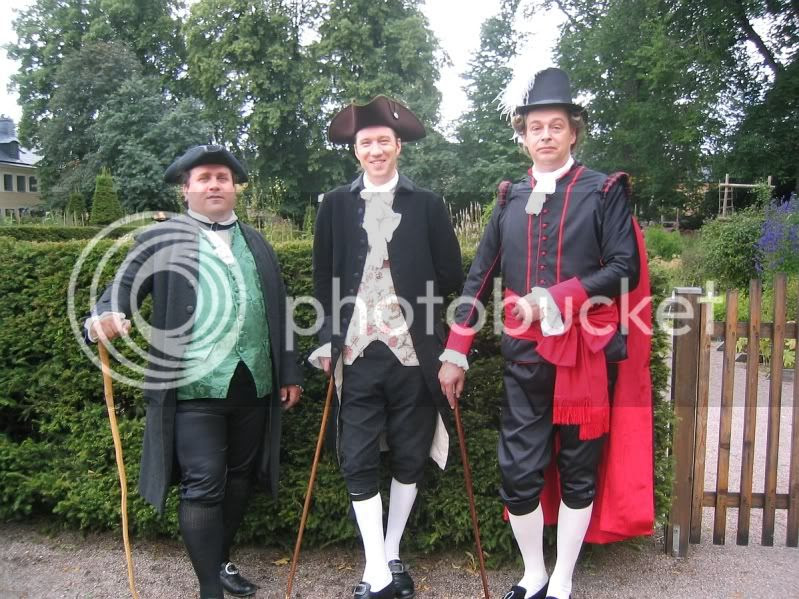 I fell in love with this polonaise in blue linen. So beautiful! 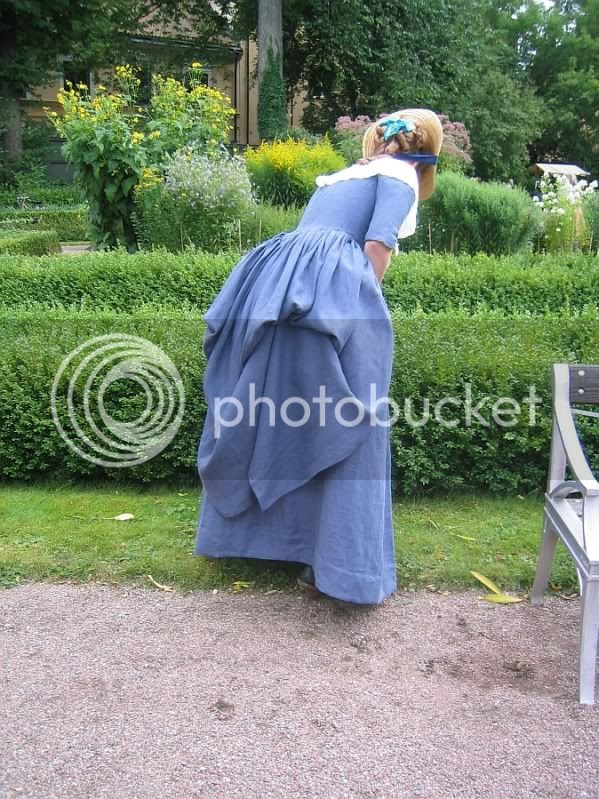 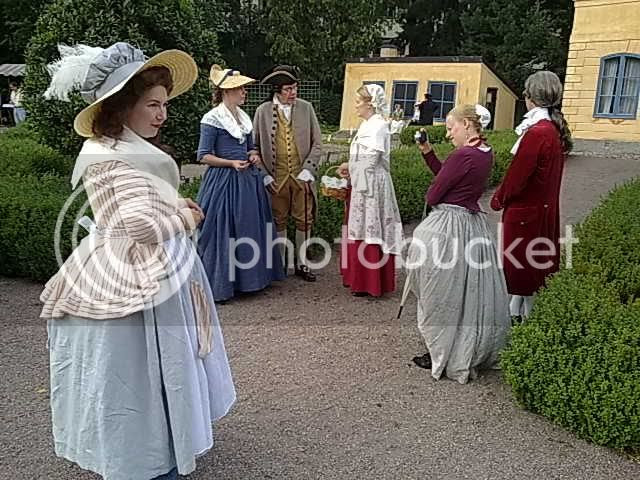 It was a very windy day and I would have liked more than one hairpin.. 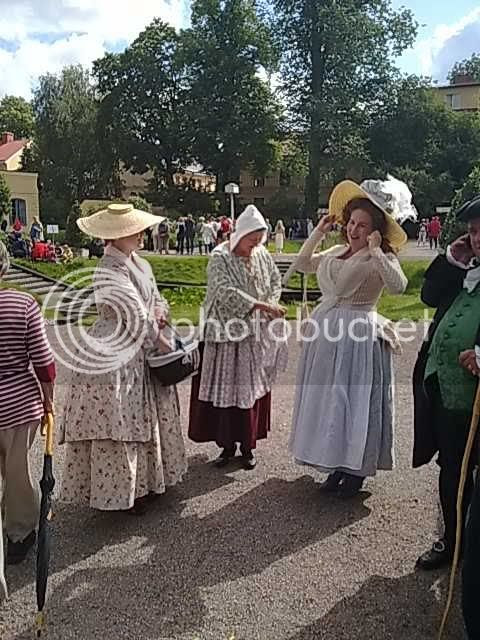 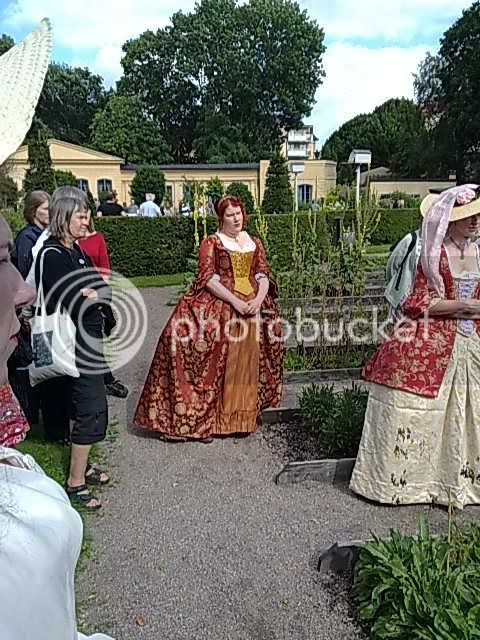 Inspired by Marie Antoinette’s Trianon I borrowed a goat. 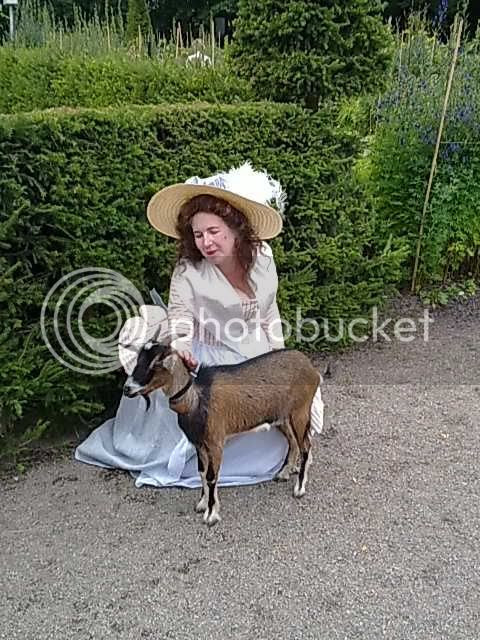 A glimpse of the garden. 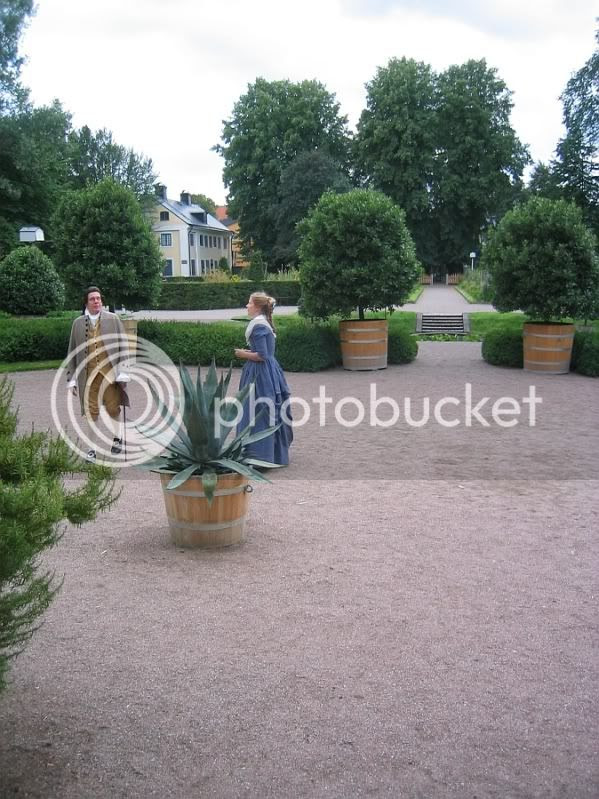 And suddenly everybody started singing Improvised Bellman before dinner... 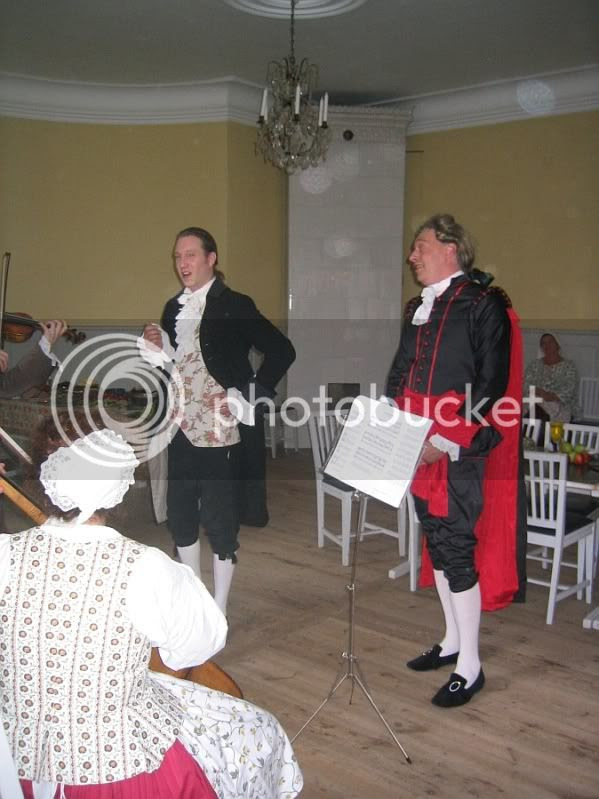 The “simple” dinner we enjoyed... I wonder what the host’s view of an abundant meal is… 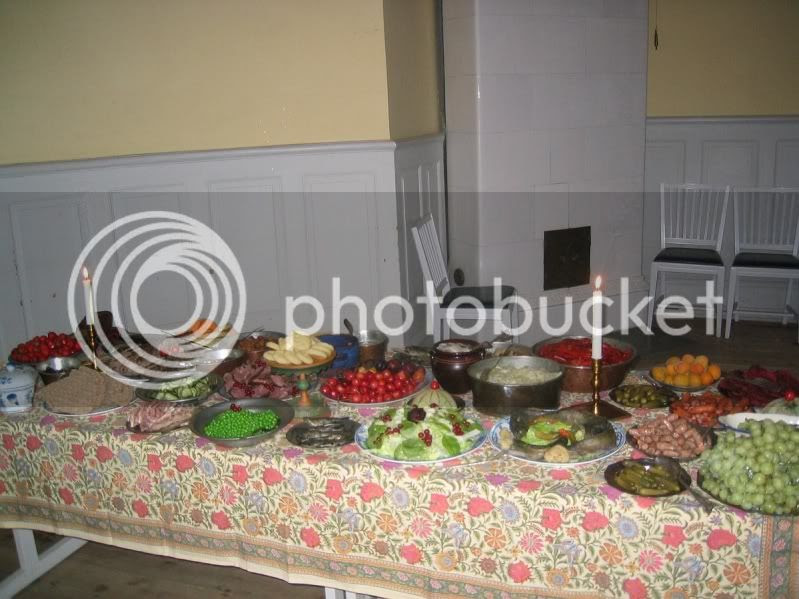 I really felt the need for a hat for the 18th century market I attended yesterday and have, since a year or so, planned to do something about a straw-hat I have. It has a rather unbecoming round top, so I wanted to disguise that somehow. In my stash I found a piece of silver silk dupion and as I wore a grey petticoat I thought that would look all right.

This is what I started out with. Planned decoration and inspiration: 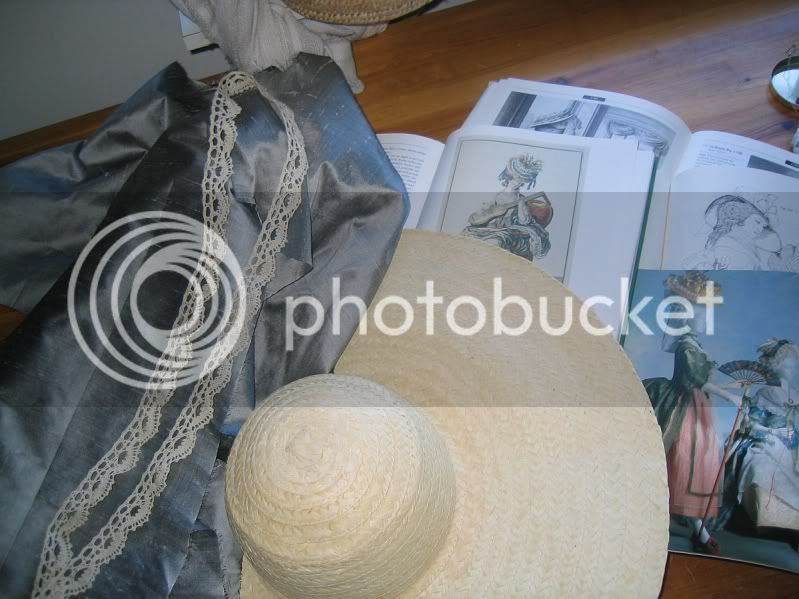 And this is what I ended up with: 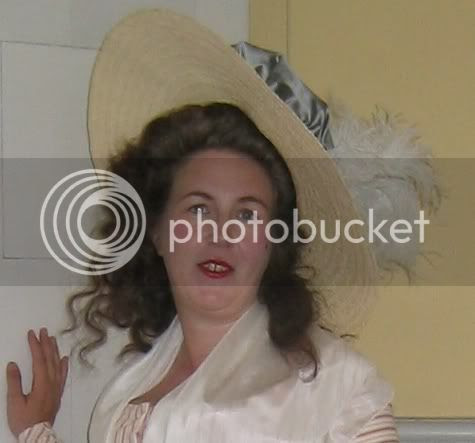 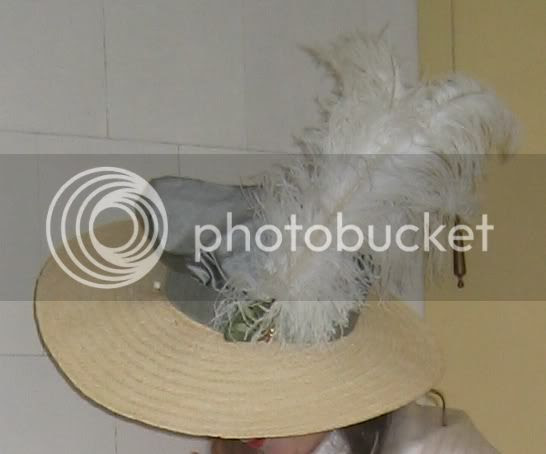 I cut out a circle as big as my scrap allowed, around 45cm across. Then I cut a strip around 65 cm long and clued that to a strip of thick paper- in ended up being 5 cm wide. I gathered the circle to the strip, and then the (sewn together) strip to the straw brim. I purposely made the brim wider in the front and on the undecorated side. I made a halfcockard out of green silk and attached five white feathers behind. I’m very pleased with the result! It took about 3 hours from start to finish and then I watched Buffy while I did the sewing, so it probably took a little longer than if I had concentrated only on the sewing. I think it becomes me very well, if I’m allowed to say so and I was really pleased on how my hair turned out. Though I think I will buy some loose curls to attach to the back. Then I can curl all my hair tightly and let the fake hair hang down my back.
Posted by Isis at 18:09 3 comments:

I mainly started this blog to make it easier for me to follow the blogs that interests me here. I will probably post, but then it will be the same posts I do at Livejournal, where I'm isiswardrobe.
Posted by Isis at 17:47 2 comments: