As I have finally managed to figure out how to make a static post I thought I should do one with everything in my 18th century wardrobe. That proved to be a way too long and cumbersome entry, so instead I will do separate posts for every outfit and then put the link in the static post instead. I’ll try to do it in chronological order, which means that this will be the hall of shame post.


I joined Gustafs Skål in 2001 after having spent the most of my free time the previous decade on making theater costumes. So I was not completely new to sewing. I was, however, extremely short of money. I don’t have any pictures of my first pair of stays which were quite pretty- green linen with hand sewn channels in blue. The fit was a horror, though. I used the one that floats around on the net and that many seem to use in their first try. It seems that it’s not the best pattern for a short-waisted body with a large chest. Also, it didn’t help that the only boning I could get my hand on was Rigilene…

Being extremely short of money at the time for my first party, I ransacked my fabric bin and came up with a complete outfit made of 100% dead dino. Voila! 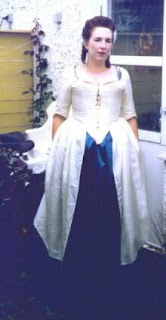 The cut is all right, it’s a polonaise from Janet Arnold’s Patterns of Fashion and seams and sleeves are right. The fabric not so much… And I had my first lesson in how much your stays affect the fit of the gown. The picture is poor quality, but I think you can make out of my breasts seems to be cut in half and that I’m of the same straight shape from top to bottom which is a bit amazing given my body’s natural shape on an hourglass.

Needless to say perhaps, but I hated this gown from start to finish and worn it only once. It is no more, the only proof that it ever was, is the bad picture above. Which can be used to show that I have actually learned something in the ten years that have gone by.
Posted by Isis at 09:07

Hmm, yes, I can see the difference from today :) . Isn't that a wonderful thought, that we progress so much, much more than we realise, until we look at old photos? I'm glad MY early attempts aren't captured with camera! I too used that horrible stays pattern (with criss-cross-lacing to boot!) and I looked like a box.

What's dead dino? I have seen this expression on LJ forums but I haven't grasped its actual meaning :P

Madame Berg: At least my stays were properly laced. ;) Isn't it facinating how much stays can distort yo into a shape you don't want? Dead dino is polyester XD

Isis--for a first go, you did beautifully! And while you've certainly progressed, I can see that you had an artistic eye all along--because that color combo is quite lovely :) Thanks for sharing this!

Rowenna: Thank you- you are too kind! But you are right, the colours were the only thing about it I liked!