The third and last part, Gustav Vasa’s son, Johan III and his second wife, Gunilla Bielke. I think Johan’s burial clothes are the most interesting of them all. 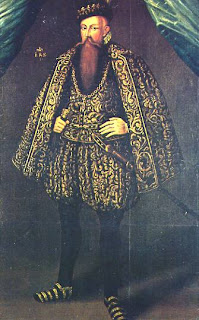 Johan became king when his older brother Erik XIV died. Erik who was very unbalanced (or stark raving mad) had been imprisoned by his younger brothers and died by arsenic poisoning. If that was not by a direct order from Johan, well at least Johan wasn’t unhappy about it.

He was dressed in a coat of black velvet, the fabric 52 cm wide and lined with rather loosely woven black two-shaft silk. The warp is very strong in comparison with the weft and gives the material a rope-like appearance. It is open in front, and is made out of one back piece and two front pieces with gores in the sides, reaching up to the armhole. The round neckline has a 5 cm wide standing collar. There is a decorative seam at the back, close to the sleeve. The sleeves are in one piece with a gore at the shoulder. It has a 6 cm long slit , that was buttoned with two buttons made of silk rope. When buttoned up one part of the slit overlapped the other by 3 cm. 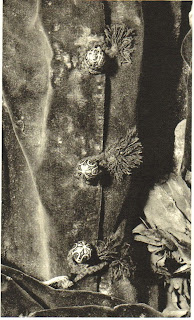 The right front overlaps the left by 9 cm, and there is no collar at that part that overlaps- On the left side 11 braided silk loops are fastened 6 cm apart. On the right side there are 18 round buttons in gold and black enamel. This coat was in all probability part of the king's wardrobe during life. There are no records of burial clothes being made, and the coat is very well made and handsomely decorated. Especially the decorative seams in the back suggest a garment that you were supposed to see all sides of. 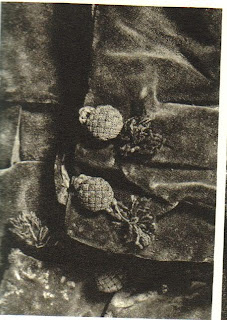 Under his crown the king wore a black velvet cap, lined with black satin. The bottom has been folded up so the lining is visible. The shoes are made of leather, covered with black velvet, with soles of silver-gilt. The soles are actually worn, so these are shoes he walked around in. Must have been slippery! His stockings are of knitted silk, now yellow. (A description has been made on how to knit these. I don't knit myself, but if someone is interested, I can translate it.) 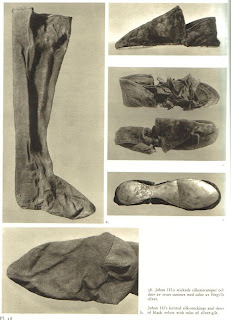 Up to the last ten years of his life there are notations on his wardrobe, about new clothes, or changes made to existing outfits. There are also notations of patterns for the clothes being made of simple fabrics. Notations from 1589-1592 say that all the kings clothes were lined with leather, wool or "carteck". It is assumed that "carteck" is the same material as the gown he wears in his coffin. Caps were usually lined with satin.

His crown and sceptre were crafted in gold. 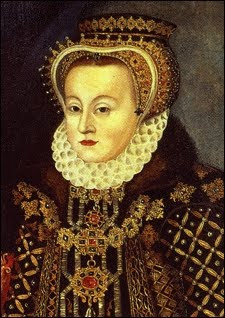 Gunilla was not a princess but from an old Swedish noble house. She was just sixteen when Johan wanted to marry her, he was 47, and she was not keen at all, but her family talked her into it. She became a widow at 24 and died quite young. She had a very bad relation to her brother-in-law Karl IX- he didn’t come to the wedding, he tried to lessen her income when she was a widow and after her death, well I will get to that.

The queen was buried in a velvet gown, now brown, the fabric 50 cm in width. It consists of a bodice with a skirt sewn to it. The bodice has two front pieces. The front seam is now sewn together for 10 cm, and open for 19, so the length of the front is 29 cm. The back is just two pieces that covers the shoulders. The skirt is pleated, and hemmed with a strip of brown home-spun, 2.5 cm ribbon that can be seen on the right side of the skirt, and 7 cm on the inside. The sleeves are made of gold brocade, edged with white satin, 2 cm wide and folded. 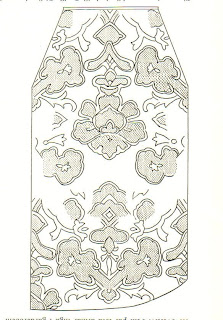 The gown was probably part of the living queen's wardrobe, and changed for the burial. The skirt has probably been reduced in width by half. In the queens wardrobe the skirts were between 7 and 11 “alnar” (1”aln”=59cm) in width. The skirts are paired with the bodices that belong to them, and she also had five pairs of detachable sleeves.

The queen had 1.8 cm wide silk ribbons wrapped in her hair, now dark brown in colour. Ribbons of this type were often mentioned in her accounts. Shoes were crafted from (now) brown velvet, with soles in gold brocade.

Her crown and sceptre were made of gold gilded silver. It's quite clumsily made, as a contrast to the other queens. When she died her brother-in-law Karl IX was king, and as I said he didn't much care for her, so perhaps he didn't want to put too much money on her burial. She also had an orb of the same material. (Karl was also responsible for his step-mother’s burial regalia and they are much nicer.)

She also wore a gold chain necklace, 105 cm long. A bracelet of gold chain, the rings slightly oval, 18.5 cm long. Another bracelet was made of strung pearls. A plain gold ring has "Anno 1594 AS" engraved on the inside. "AS" may mean that it was a gift from her friend and cousin by marriage, Anna Sture. But as the queen had been married more or less by force to Johan III, at the age of 16, and widowed 8 years later, it is possible that it was a gift from a secret lover.
Posted by Isis at 14:21