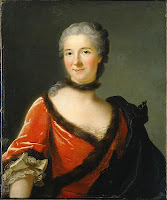 The funniest thing with this painting of a woman in a red velvet wrapping gown with fur trim is that I found it well after I had finished my green velvet wrapping gown with fur trim. The pattern used is once again from Patterns of Fashions by Janet Arnold and is called just a wrapping gown. I wanted something cozy for winter but originally I had planned to trim it with fake fur. Then my Mum gave me my grandmother’s old muskrat fur, which is why I used real fur in the end.


Almost finished. The yellow silk stays were an attempt to make stays without visible channels, which worked so-so. Also, I lost a lot of weight during that period and the stays were too large the first time I wore them. I did a miscalculation when I bought the fabric- I had planned for it to be floor length. Eventually I’m going to buy some more fabric to make a matching petticoat.

The first time I wore it, without pocket hoops. 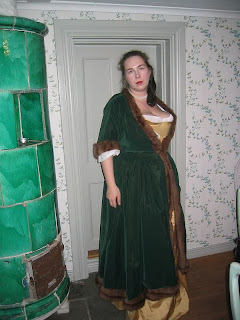 The gown looked so much better with them. 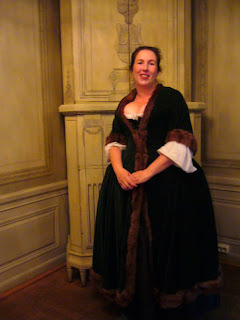 It also worked well as a masquerade gown. 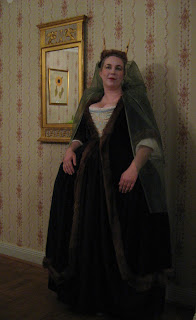