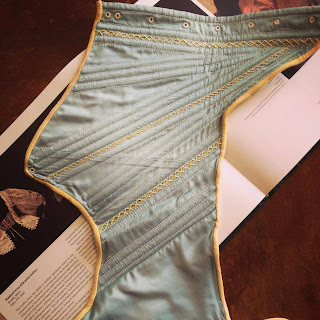 Vacation is over and a nice vacation it was too, I have no complaints at all. Now I have a tremendous backlog of blogs to read- it will probably take me a week or so. My sewing plans for the rest of the year is to continue to finish my already started to project. I haven’t been completely good there; I have started a few completely new ones this year. The current example is a striped 1790’s gown. I’m making it completely by hand and am just about to set the sleevils. I have also, finally, started the 1630’s gown! I have been a bit angsty over the pattern, but then I realized that I could use my 1790’s stays. It may sound strange, but actually makes sense, because the back seam is placed in just about the right place and it is also raised to hit just above the waist.
So I traced the stays onto paper, and then draw in the right shape for the bodice. The pattern for the original can be found in Seventeenth-Century Women's Dress Patterns by Jenny Tiramani and Susan North. The foundation is in linen canvas, enforced by both buckram and boning, and it seems likely that it could be used without stays and that is how I want to interpret it. There is a problem with that with the original because the front is laced with a panel that is just about 10 cm high, stopping well beneath the bust. As breasts were not left to roam free, this may mean that stays were worn underneath it, but it can also mean that a now missing, boned stomacher was worn with it.


Here is the finished pattern. The original lines of the stays can be seen as a faint line. The pattern has a narrow back piece and a long front/back piece as well as the lacing panel. The areas shaded with blue are reinforced with heavy buckram and the red with a lighter weight. I haven’t drawn in the boning channels, but there are horizontal ones at the back and a few for every reinforced part. The original has much wider boning than I have, so I will have more boning channels. I will also sew it on machine; the canvas and buckram are much too hard to my hands for something else. 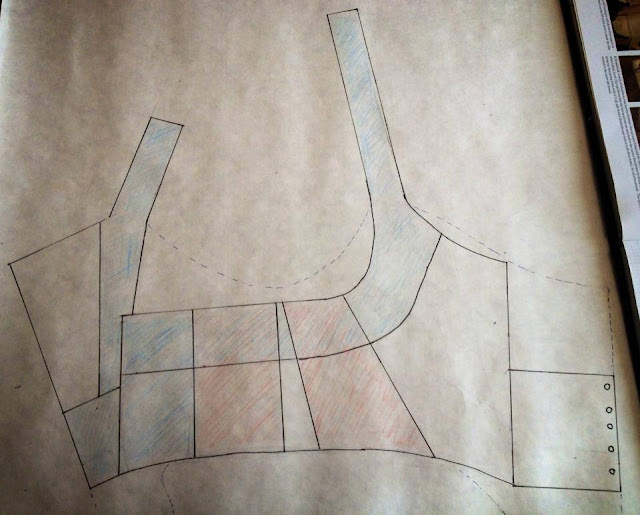 After a quick fitting it was clear that the back was too wide and the shoulder straps too long, but that are easy fixes. I also decided against a stomacher and will instead raise the front almost up the faint lines of the stays. It is purely for comfort, from experience I know that an extra stomacher in stays is fiddly and my heavy bosom wants to escape, it is better to have all together. This might not be the period correct way of doing it, but I feel that it will be the best solution for me. A slender person with a smaller bust could probably use the stomacher option with excellent results.

I had intended to find buckram in two different weights, but I also wanted to start this project now, so instead I will use the same linen canvas as the foundation instead of the heavy buckram. I am currently sewing the boning channels and pad stitch the various interfacings to the foundation. The shell fabric basically uses the same pattern, only it is longer with slashes for the gussets. Each pattern piece will be finished with foundation and shell fabric before the whole bodice is to be assembled. There are also wings to be cut, boned and covered with fabric and, of course, the enormous sleeves. All in dark purple taffeta. 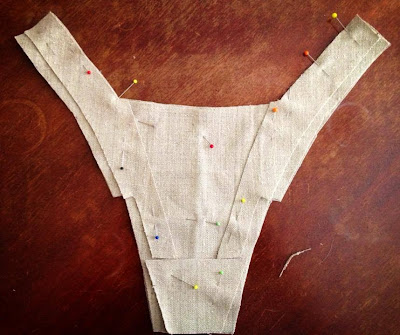