A masked ball deep inside the earth 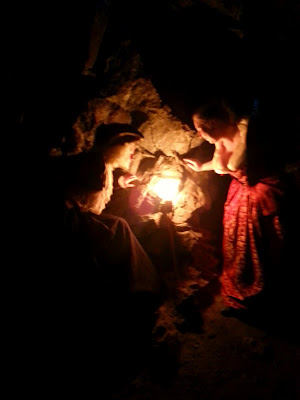 Isn’t this picture wonderful? Caroline and I are looking at a living flame, lightening a mining cave and we are 155 meters underground.

This weekend was spent at the silver mine at Sala, a couple of miles northwest from Stockholm. The mine was active for about 400 years, until 1908 and is today a museum. One weekend every years there is an 18th century festival, though I must confess that I have never heard of it before. The idea is, I gather, to make it bigger and more well-known. The Society of Gustafs Skål was invited to be part of the entertainment for food and a bed. And, on Saturday night, there was a masked ball inside the belly of the mine.


Ten years old, but I still love this dress. 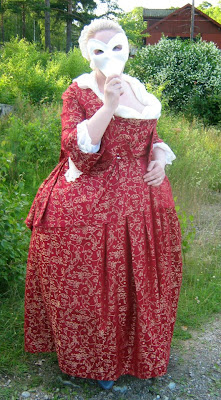 Pleased as punch as the makeup is completely made by myself after period recipes. I talk more about what I made and, how, here. 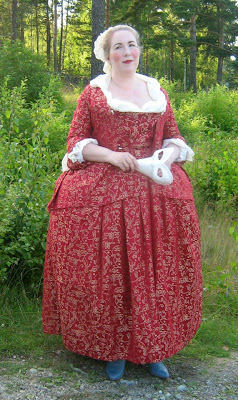 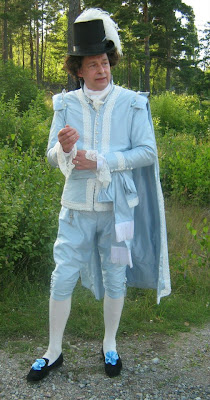 Into the mine. To appease the Lady of the Mine (Gruvfrun) you must knock on the rock three times when you come into the mine. You have to be very polite to her and not shout, whistle, swear or hurt animals when you are inside. Otherwise she may cause the roof to fall down over you. 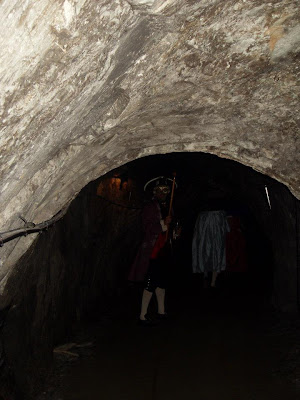 We never met the Lady of the Mine, but perhaps there was a Lord too? 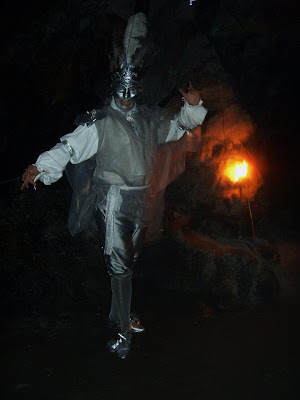 The lake. We don't know where you get if you take the boat. Gollum's island, perhaps? 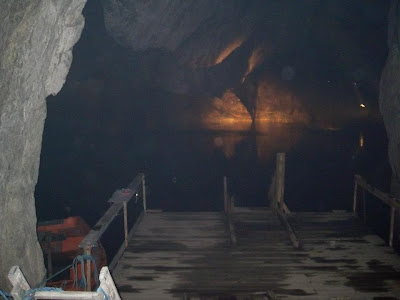 It was either wearing umbrellas when we went outside the designated party areas, or wearing hard hats. I can tell you, nothing brings out your inner silliness better than wandering around underground dressed in 18th century and carrying umbrellas! 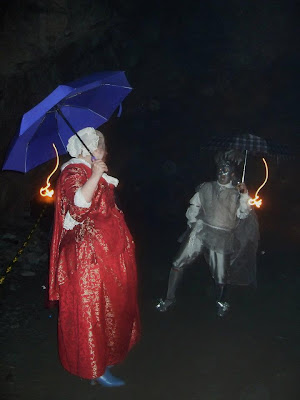 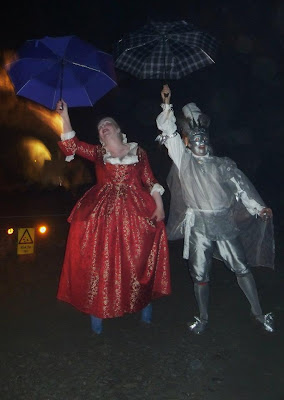 In the ball room. Every pictures taken in this room showed up these peculiar lights all around, though they weren't visible for the naked eye. Somewhat spooky. 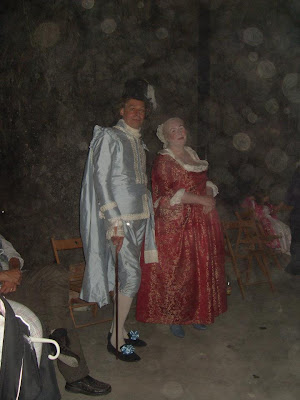 And outside this fog that we couldn't see either, only on the pictures. 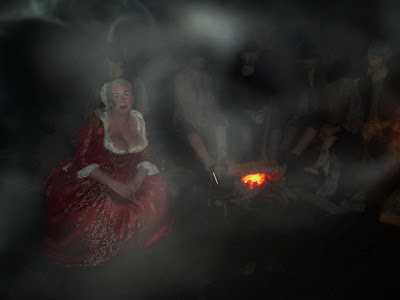 The honeymoon suit. Yes, you can spend the night deep into the rock. I wouldn't want to... 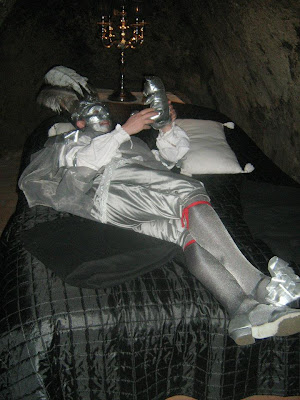 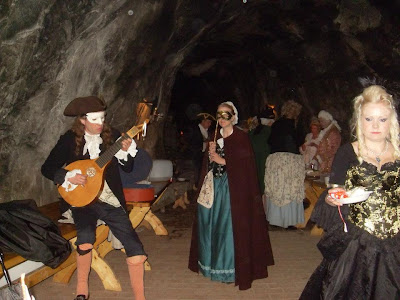 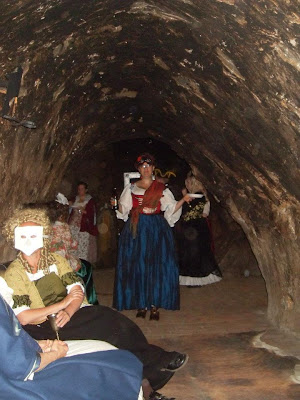 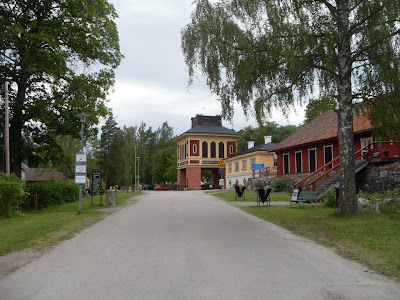 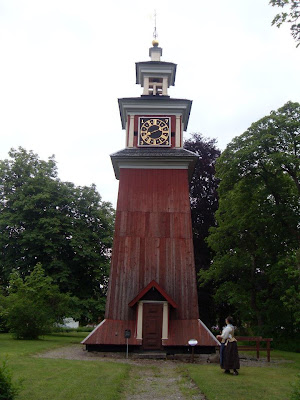 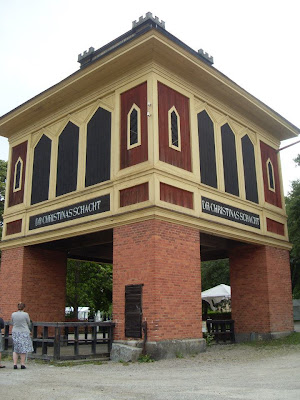 The tower is where the elevators are. It takes four minutes to travel down. 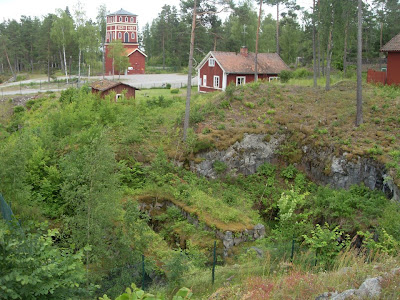 Caroline looking adorable, if somewhat misplaced in centurywise in an 19th century kitchen. 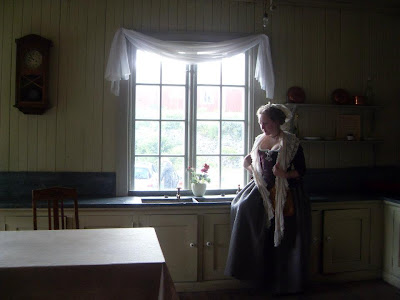 A big thank you to her and to Aggi who let me use their pictures!
Posted by Isis at 17:10

That first picture is just like a painting. It looks like a fun (and silly) time was had. Thanks for sharing!

What a neat event, looks like you guys had a lot of fun!

Thank you! It was an event that managed to be fun, silly and awesome, all in one. :)

What an incredible location! Thanks for sharing!

Wow, a party in a cave! That is possibly the most awesome location for a ball that I've ever heard of. :)

Rowenna: It really was!

Jenni: Yes, it was pretty awesome!

What a fantastic day and evening! Everyone looked great! Isis, remind me where are you in the world? Thanks, I can't remember. Cheers!

Awesome location! Looks like it was really fun! I'm a little terrified of deep caves, but maybe for a masked ball I would dare to come too.

Augustintytär: I was a little bit scared on the way down, but well into the mine it didn't feel scary at all. Perhaps because you just can't get a grip on how far down you really are. :)

This looks pretty amazing, and you looked perfect!

Johanna: Thank you so much! I think they want to make a tradition to it, so perhaps you could come in the future. :)

This looks like an illustration for an amazing story. What a wonderful photograph!