A 17th century society without compare 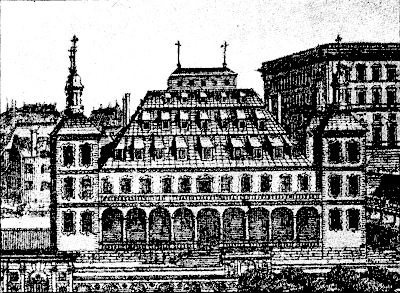 Yesterday we had a first informal gathering of 17th century enthusiasts and I must say that it was a success. We had all provided to the table, so we ate from a table loaded with various kinds of food, which felt quite right. We were 12, but there were quite a few who wanted to come but were unable to. After much talk and laughter we decided to give ourselves a name, “1600-talssällskapet Makalös”. Which, translated to English, would be The 17th century society without compare.


No, we weren’t all seized by hubris, there is actually a very good reason for it. One of the more influential families in Sweden during the 17th century was the de la Gardie family and the Field Marshal and Count Jacob De la Gardie started to build a rather spectacular palace in Stockholm during the 1630’s, though it wasn’t completed until 1652, and that palace was generally known as “Makalös”, i. e. without compare, peerless or unrivalled. Makalös was inherited by his son Magnus Gabriel De la Gardie, but eventually the palace reverted to the state and was used as an armory during the 18th century and in 1793 it was made into a theatre. Unfortunately this grand building was destroyed in a fire in 1825, so today nothing is left of it.

So, not hubris, but rather a homage.

And it gives me a good reason to post one of my favourite 17th century paintings, the double portrait of Magnus Gabriel and his wife Maria Eufrosyne of Pfalz from 1653. His mother was Ebba Brahe, who king Gustaf II Adolph wanted to marry, but wasn’t allowed to as she wasn’t good enough. Magnus Gabriel himself married Gustaf II Adolph niece, and Queen Kristina’s cousin, Maria Eufrosyne. If you are romantically inclined, then you may choose to believe that Magnus Gabriel and Kristina were in love as well, but there is actually no evidence for that. Marrying Maria Eufrosyne was a quite good carrier move, because when Kristina abdicated she made her cousin Karl king, and Magnus Gabriel was suddenly married to the king’s sister. The portrait is loaded with symbols, most which I don’t know the explanation of- for example, why is she holding the black feather? What I do know is that the painter, Hendrik Münnichhoven cleverly showed Maria Eufrosyne’s higher social status by putting her higher on the step, while Magnus Gabriel’s superiority as male and husband is shown by him stepping forward, in front of her. 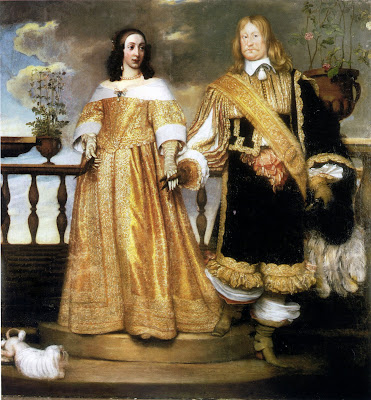 I actually took a class where we analysed this painting and what she's holding is apparently some kind of peapod or bean, as a symbol of fertility.

Johanna: Thank you! I have always thought that she is holding a feather... :)

Interesting!:D I wish we'd have such a community in Finland. Though I have to admit not having really looked, since I don't quite know where to start searching. I hope you'll post about your future meetings too.:)

Elina: I haven't heard about one either. You are welcome to join in on FB, though all information is in Swedish. We haven't been up tyo much yet, but hopefully soon!