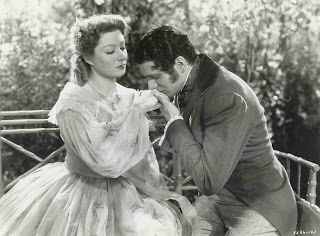 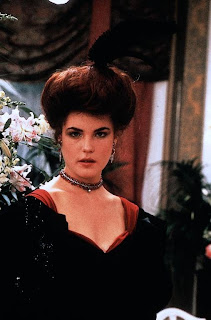 We use the same actress to make a point on how too much accuracy can alienate the viewers. In 1999 she played Marguerite in an adaption of The Scarlet Pimpernel. There was quite a lot of talk about her looks, how pasty she was, and how unkempt she looked. In truth she had a rather accurate look with a pale face, no eye make-up , red lips and frizzy hair. 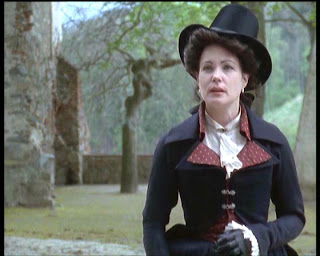 Oh, she was nothing compared to Jane Seymour who had the part in 1982. 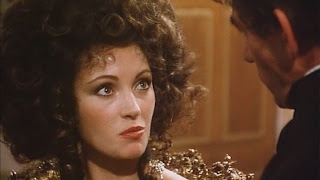 It also has to do to what works on movie. Today the 18th century is, for a lot of people, a period that people wore white wigs. Only, people didn’t. Back then people put grease in their hair and powdered it with white powder. The effect isn’t white, if you don’t happen to have white or blond hair to begin with, but grey. Dull grey, because the beauty ideal of the time was to have matte hair and shiny face- quite different from modern standards. The Victorian introduced the white wigs for their costume parties, which the movie industry adopted. Grey hair looks rather blah on the screen, but white hair looks pretty dazzling. Like Gene Kelly and Jean Hagen do in Singin’ in the Rain 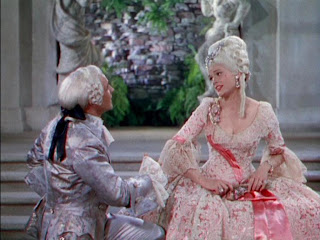 When it should have been a more like this. 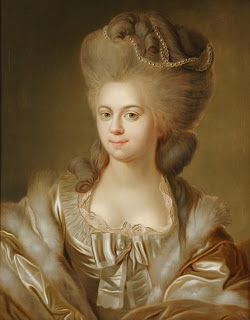 Another reason for the (mostly) modern hair and the throughoutly modern make-up was the set look for an actress. Movie companies went through time and money to give a rising star the right look. A prime example is Rita Hayworth, who went from black-headed beauty to a less exotic red head. Hayworth’s long, red hair was her trademark, something that made her easy to spot and what was expected of her to look. The outrage when she turned up platinum blond in The Lady from Shanghai was enormous and she very quickly went back to her red hair. So even in a period movie the actors needed to keep their trademark.

The transition from dark to red and to stardom. 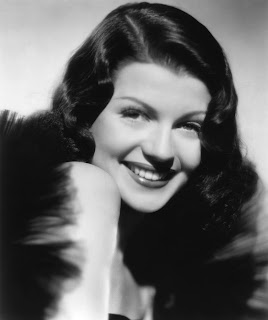 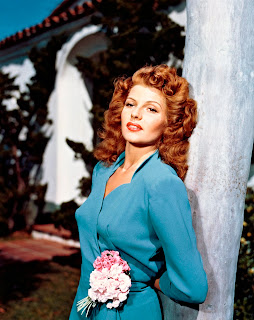 Blond and beautiful but oh so wrong. 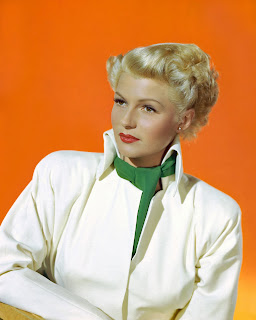 If we forward to the fifties for a moment, Marilyn Monroe is another excellent example. She had a very similar hairdo in all her movies, very blond and with curls around her face, but not all her movies was set in a contemporary time frame. Still her hair looks the same in The River of No Return and The Prince and the Showgirl, but for one thing, added hair in the back. The front look contemporary, but she either wear a chignon, a few curls or lose her at the back. 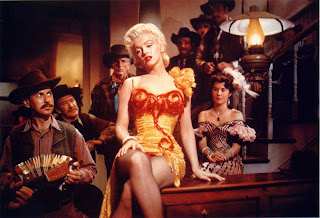 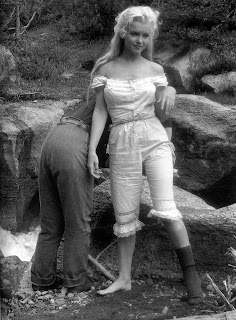 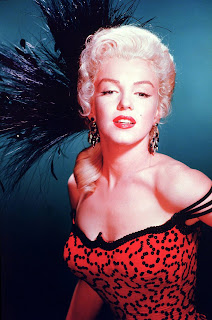 To get the right look, there was some borrowing from other time periods in historical movies, or from the right period, but the wrong sex. Here we have Lana Turner and Gene Kelly looking rather smashing in The Three Musketeers from 1948. Kelly’s front and sides are pure 1940’s, with some long hair added in the back for that period look. Turner looks adorably like Lana Turner and also rather 18th century. 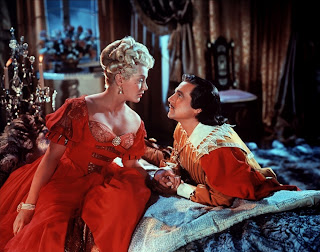 Only the movie is set in 1625 and she would more accurately have looked something like this. 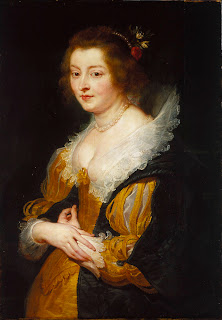 However, Turner could have gone straight to a party after filming- the hair do would have worked very well in the forties. Or take the lovely Norma Shearer in Romeo and Juliet from 1936. With a stroke of luck the hairdresser found a style that worked both in 1936 as well as Renaissance Italy. Only back then, it was something a young man might wear. 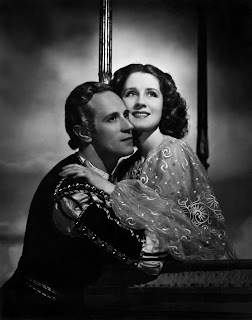 So, the conclusion I have is that even if a movie is set in a different time period, you can still safely take your inspiration from make-up from them. With the possible exception of Bette Davis who often drove the movie companies mad with trying to look right, not glamorous, a historical movie from the 1940’s will have prefect forties make up. Hair can be used as inspiration too, but perhaps not as a sole source. Clothes are a different matter, but look at them for colour and colour combinations, which are usually contemporary, even if the costumes are not. As with makeup, fashionable colours are something you get a little blind about. Take Dangerous Liasions from 1988, one of the best costume movie ever made. Yes, pastels were in back then, but the colours used are also some of the colours that were very popular in the 80’s- Like peach. 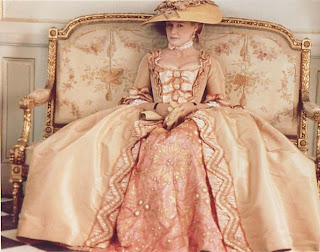 My main source for this post was Hollywood and History: Costume Design in Film by Edward Maeder, Alicia Annas, Satch Lavalley and Elois Jenssen. A very interesting and informative book!
Posted by Isis at 10:21

Oooh interesting! I did a similar post looking at how 1940's and 50's Hollywood handled mediaeval costumes. I LOVE the way the modern aesthete makes its way into costuming in evry era. Even today - look at the Tudors. Even productions we think have nailed it show over time to date, like Kate Beckinsale's Emma. It's fun. I've decided to embrace it, not to fight it!

MrsC: Yes, I remember that post! Oh yes, The Tudors... But generally costumes today are very good, I think. Even if they will age, no doubt. :)

Costumes are, after all, meant to show something fictious and need to fit into the rest, which means that one can't demand 100% accuracy. However, I feel The Tudors crosses the line something dreadful, and with pure historical facts too. But a movie with costumes that aren't perfect historicall but say something meaningful about the whole experience is a whole other matter. Only example I can think of right now is Queen Margot, which clearly isn't period correct for the late 15th century, but fits into the rest so well.

I think it's fun to watch historical historicals to see the influence on not only the costuming and hair but the storylines as well--for instance, the patriotic elements of Drums Along the Mohawk, made right before the US entry into WWII.

And some of the costumes that are less "bound" by accuracy are just plain fun! See: Orphans of the Storm. LOVE the 18th century "party" clothes that are pure Art Deco!

Rowenna: Yes, a lot of patriotic movies during WWII. Even in Sweden, who was a neutral country.

I haven't seen Orphans of the Storm, but I have seen pictures...

It's quite comical because it's such an abrupt change.

Oh, that is almost lewd! I mean chemise a la reine is one thing but 1930's negligee is a whole other level hehehe.
I agree that costumes should inform the action also, but this works so much better on stage than in a film, where there is a higher call for realism. Except when there isn't, like Ladyhawke, or Knights Tale, or Plunket and Maclean, or Eugene Onegin. Even what I have seen of Marie Antoinette with Kirsten Dunst, the licence taken with colour and costume is quite huge but it works in its own world. I've not seen Queen Margot, now I want to! I'm always happy with costuming concepts that work on other levels, it's when they don't work on other levels that I don't like. At least if they are accurate they won't jarr as much! :) And when it all works it is so sublime we want to watch it over and again!

I absolutely agree with you. Have you seen Fanny and Alexander. Now I haven't seen it in years, so I suspect I would spot the 1980's influence if I saw it again, but I think the costumes are a prime example of what we have been talking about. The costumer didn't copy the early 19th century, she simplified it, though keeping with silouttes and I feel that she did it very well. She also worked with colours throughour the movie to enhance the moods and setting. There was an excellent book about it, but I don't think it is translated.