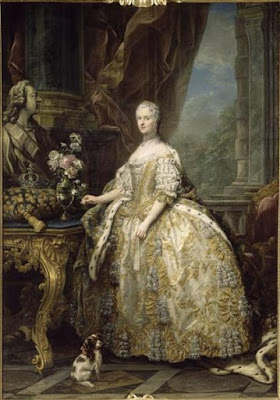 
As I have already mentioned. The out layer will be in white silk velvet that I found at Pure Silks. It’s absolutely lovely and more lightweight than the rayon silks I have previously worked with. 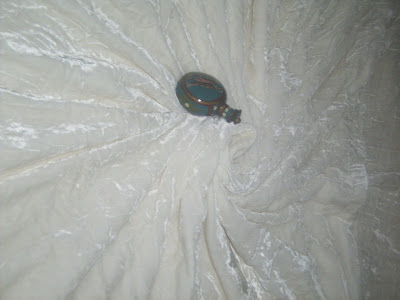 It’s still a somewhat scary prospect… Perhaps it’s time to reveal what I’m going to be dressed at. The masked ball has The Seasons as theme and with white velvet I can hardly be anything else than Lady Winter. Sleeves and décolleté will be decorated with a lovely faux mink from The Throw company. I haven’t quite made up my mind if I need some sparkle too. I also need to do something silly to wear in my hair, fashioned of either velvet or fur or both.

The panier Well, they are already done. I made them years ago, but have so far never had an opportunity to wear them. I was given the pattern from a friend, but I think it’s based on the panier in Norah Waugh’s Corsets and Crinolines. It’s made in red linen and the boning is steel that once upon a time were used around book boxes. Huge book boxes. 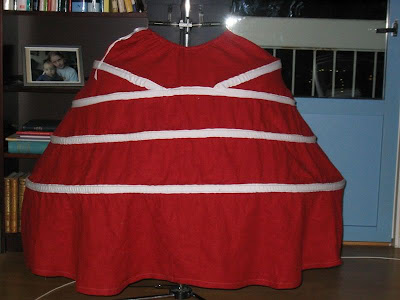 It’s a more doomed shape panier than the very boxy ones at The Armory, so I will obviously need to adapt the petticoat to fit the panier. Luckily I need more than one petticoat, so I will do them first before I do the velvet. However, there is a possibility that velvet will be too heavy for the large panier, though it is quite sturdy. Plan B is to make a smaller petticoat to fit over my pocket hoops instead. They are sturdy enough for my green velvet gown, so they should keep up for the more lightweight silk velvet.

The bodice, hour 1 . Cutting out the linen canvas. I have a true and tried stays pattern and I’m simply using that. I forgot to take pictures, but this old one show the pattern I use. If I had had more time, I might have tried to change the pattern so it looked more like Sofia Magdalena’s bodice. As it is now the inner layer will be made out of eight pattern pieces + the shoulder straps. The bodice will probably not be as much off the shoulders as the extant ones. I’m going to wait until the inner layer is boned so I can try it on and experiment with angles. 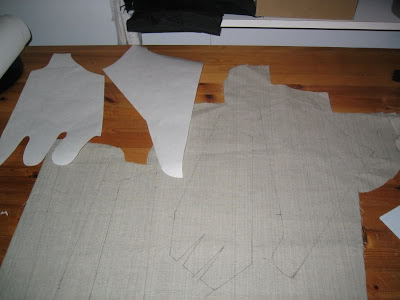 what is the red? Is that the bodice?

Juliet: I'm not sure what you mean. The red what? The red with white strips is the panier that is meant to held out the petticoats. :)

Do you have a design for your gown? If so, please post!

Comtesse Olympe: I have it all in my head, butI could probably make a design on paper. I have been without a scanner for years so I have got out of teh habit to post designs, but I do have one now. :)

I'm reading this in the wrong order - working backwards. It's fascinating though, and the dress design sounds gorgeous!

Dreamstess: I just hope the design will work out in reality too... :)

I love your Blog and your selfmade clothes to :)
The Panier is to small for a Robe de Cour, look please this Robe a la Francaise de cour, this panier a coudes is absolut wonderful:

I'm curious to why you say the panier is too small. I have never came across a source that states the specific width for the paniers of a robe de cour and I'd be interested to know of it. :) Looking at paintings indicate a varied width, as well as shape of the panier. The robe de cour you post a link to is indeed very lovely, but has a boxlike shape when mine is doom-shaped, which of course makes a difference visually.