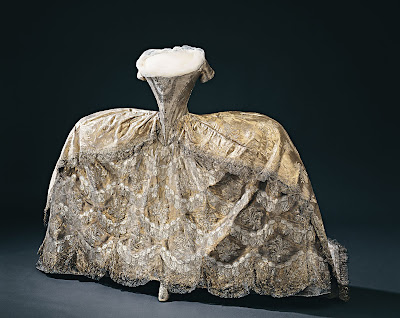 It's not difficult to find paintings and this style stay very consistent throughout the century. Here is Sofia Magdalena of Brandenburg-Kulmbach, queen of Denmark. 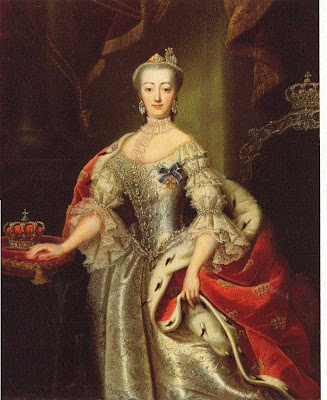 And here is her grand-daughter Sofia Magdalena of Denmark, queen of Sweden, two generations later. 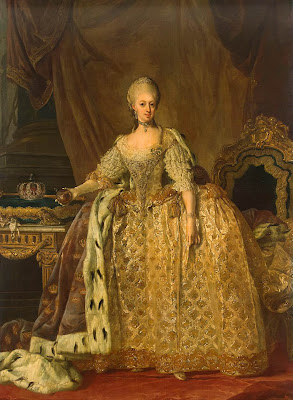 The robe de cours in Stockholm, though from different generations as well, are remarkably alike, though the earlier ones have panniers that are much boxier in shape.

Only at the end of the century, the styles seems to change, at least in France, if these rather whimsical pictures are to be believed. The ever talented Koshka has made a delightful version here.

There are also extant robe de cours in Russia. This is Elizabeth of Russia's. 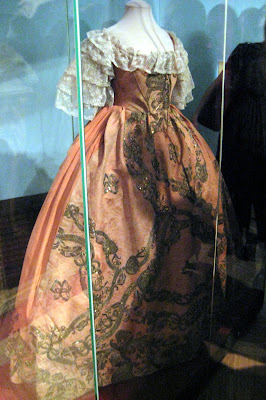 Here are a few other examples. I don't know anything about these gowns- they look quite different from the ones in Stockholm, which may be because they were made a bit different in Russia. But they may also have been changed to go with later fashions (I'm completely sure that the Lace on Elizabeth's gown aren't original) or just be displayed on mannequins with the wrong shape. I would dearly love to know more about them.

There are also a number of painting of robes that doesn't have the typical lace cuffs from the first half of the 18th century. You can find a more in depth discussion on those on the Marquise site.. They seem to have a variety of sleeves. 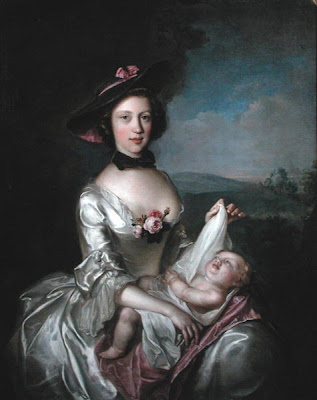 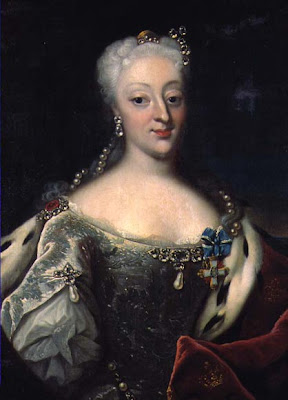 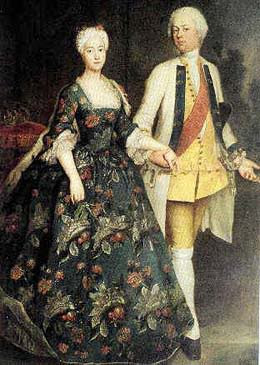 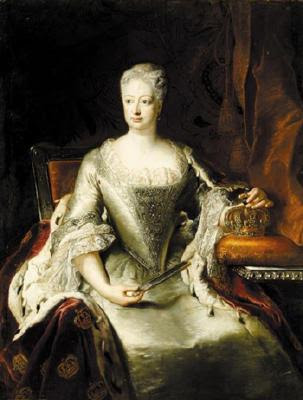 Gowns for costume balls are also often of this type. 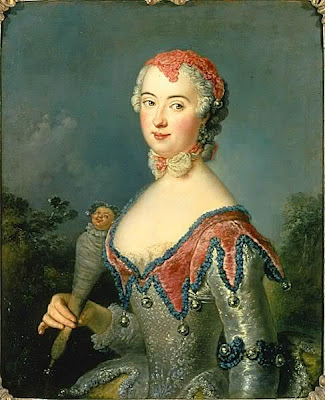 My first idea was to make a gown in silk brocade with the lace cuffs, but then there is this painting. 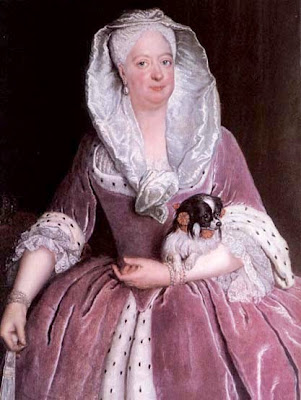 I have a weakness for velvet as you may have gathered by now and I like this kind of sleeves: 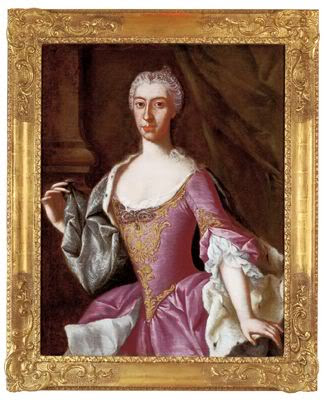 And my imagination took a sidestep, so a velvet gown and no lace cuffs it will be. So now I have several yards of silk velvet and me wondering if I'm not totally crazy to make a grand robe in slippery velvet. Time will tell... 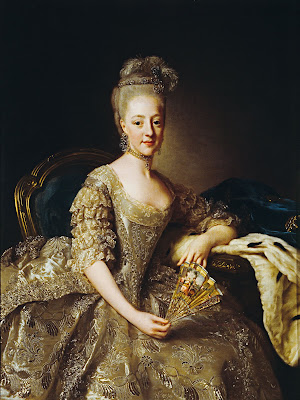 Ooo, I can't wait to see this gown come to life! It would be absolutely -amazing- in silk velvet, but it would be a complete beast to work on. Still, I'd be tempted too!
I do like the typical lace sleeves that you usually see with the Robe de Cour, but the sleeves on that pink gown with the gold embroidery are delicious!

Mistress f Disguise: Yes, I may very well regret it bitterly. Pin, pin, baste, baste, baste, I think... I have been thinking of attaching the sleeves so they will be easy to remove so I could have lace ones too, at a later occasion. We'll see...

I am in the middle of researching court gowns to do the very same thing, so I'll be interested to learn from your experience. Good luck with the project!

NOOO! Think about the weight of the velvet, it will be a complete nightmare to make panniers strong enough to support it. I suspect this is why velvet is so rarely used! If you pull it off however wowowowo!

Mrs C: I know there is insanity in it, but I think it will work. My paniers are sturdy and the silk velvet I have is not as heavy weight as rayon velvet. My 12 metres (meant for other project too) weighs about 2 kilos. I'm not quite sure how much I will need for the petticoat, but it's not as much fabric in them as one may think. I have the patterns for two robe de cours and I did a very quick estimation of how mych fabric I would need. If my fabric is 1 metre wide, I would need 6 metres for the largest of those paniers, but my panier is smaller than that. And my fabric is wider than one metre. Of course, I may be wrong- I need under petticoats too. I have a plan B, if it fails, and that is to make a petticoat with even less fabric and wear them over my pocket hoops. They don't collapse under my rayon velvet gown, so I think they will work for the silk velvet, if I need to.

Either way I'm sure it will be a learning experience...