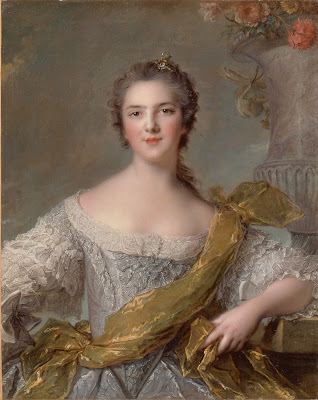 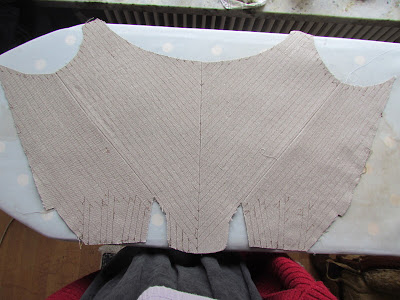 Hour 5 Sewing the front pieces together as well as the back pieces. Not the side seams, as some of the boning channels opened up into it and needed to be bones before sewing them together. I also mulled over what it really meant to glue paper on the inner layer. Operafantomet kindly pointed me towards these extant 16th century clothes , where some have had their bodice stiffened with the help of cardboard and wool felt, where the cardboard wasn’t made of cellulose but linen fiber and animal glue. I have no idea what kind of paper that has been used in the extant 18th century stays I know of, but it seems quite likely that it was textile based paper. Given my time frame I don’t really have the room to experiment, so I decided to make a modern translation and used double sided interfacing to fuse a more lightweight white linen fabric to the inner layer. It made it stiffer and smoother and the boning channels are less pronounced, so I think it’s a pretty good solution, albeit not a period-correct one. 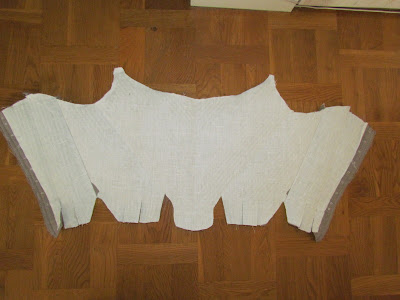 Hour 6-9 Making 18 lacing holes. Much easier to do before the whole thing is completely sewn together. I don’t use grommet both because they weren’t used in the 18th century, but also because I find them frustrating to put in and very often pops out again. I make my lacing holes quite small and use a waxed linen thread. I’m pleased to say that they finally stat to look more even.

Hour 10-12 Boning the bodice and sewing the last seams. I use plastic boning from Cheaptrims that I buy by the spool. It’s quite flexible, but in fully bones stays they give good support and I promise, I need my support. I cut it with a pair of household scissors and just round the edges. So far I have never had any bone poke through. 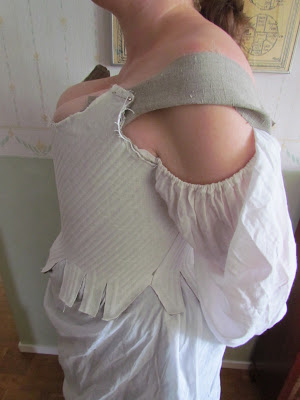 Now I need to bone the shoulder straps and put them into place and then I can start with cutting the silk velvet. Scary thought as it is… 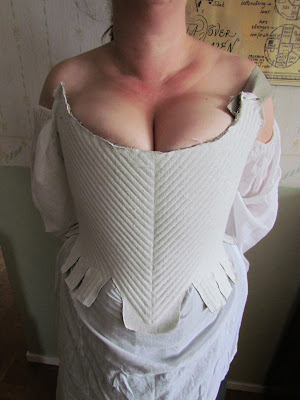 Remember that I said I couldn't find a picture os Sofia Magdalena's coronation robe? Well, I did find one, here it is: 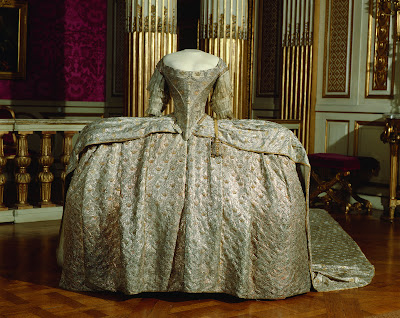 Dear Isis,
I love how methodically this is going. So well thought out. It's going to be a grand dress!

Very best, and we're rooting for you,

OOOOooh! Fabulous! I've also been working on a robe de cour, and need to post about it. It's so interesting to compare to what you are doing. I'm sure that yours will be better than mine; I cut too many corners. The first painting is my inspiration image too.

Dreamstress: I'm not so sure, I think you are a much better seamstress than I am. And you have to post, I'd love to see it!

Oh, how I want to make a court dress... Lately I've been thinking about it, something along the lines of that one in the first painting of this post..

Sanna: I'd love to see your take on it!

Hello there! I have just come across your Blog - and I wondered if you finished your Project off? The ball seems to have been over for some time - did you finish the Dress in time? I'd love to see it, but I haven't found part 5 of the Project. Did I overlook anything?

Hi there!
I have just come across your blog and seeing that the ball must have been over for some time now, I tried to find part 5 of the Project. I didn't find it though, but I'd love to see the result! Did I overlook anything?

Vera: I'm sorry to say that I haven't finished this project. Some personal things happened at the same time and took all my sewing time, leaving me to wear Another gown. I haven't given up on the project, though and am determined to finish it, but I don't know when.