My mantua dreams are not new, but they have been on hold for quite some time. Now when I have worked myself through more than halfway of my historical UFO-pile, I feel that I can start dreaming again. And planning and researching! I want to make a 17th century one, so this post is about the development of the mantua up to around 1720.

The mantua appears in the late 17th, a loose gown that is pleated to fit the body and with a split skirt that is folded back to reveal the lining or wrong side of the fabric. Formal gowns of the time had boned and rigid bodices and even if the mantua were worn over stays, the folds gave it a fluid and less formal appeance. In the 18th century the mantua developed into three directions. In England it turned into the ultra formal court mantua, which the English prefeered over the Robe de Cour. It also evolved into the Robe Anglasie, first with the folds sewn down, but later the folds disappeared into seams and the bodice and skirt got separated. In France it turned into the Robe Battante or Volante, allowing the pleats to hange freely, and then into the Robe Francasie with its fitted front and loose back pleats. When, in the late 18th century the Anglaise and Francasie married into the Robe Piemontaise we get a gown which is quite far from its great-grandparent the mantua.

There are few extant mantuas from this early period and even fewer seems to have been researched to any great length. To my knowledge there are only three which have had their pattern taken.

The earliestt mantua I have seen depicted is from 1672 and is indeed a very informal painting of the artist's children, but the mantua is still quite lavish. It has two typical characteristics of the early mantua, very short sleevs and the skirt is folded back well below the  hips. Although it can't be seen here, it probably also had a closed front. Mantuas worn by the upper classes always seems to have had a train.


In the 1680's the sleeves remained quite short, but the skirt is folded back atop of the hips. Stripes were very popular and the mantua could both match or contrast with the petticoat. There were also a rather wide array in how the petticoat was decorated.
A collection of mantuas from Recueil des modes de la cour de France, 1670-1693.
A mantua and petticoat in both different colours and patterns, the petticoat trimmed with either a fringe or a flounce. 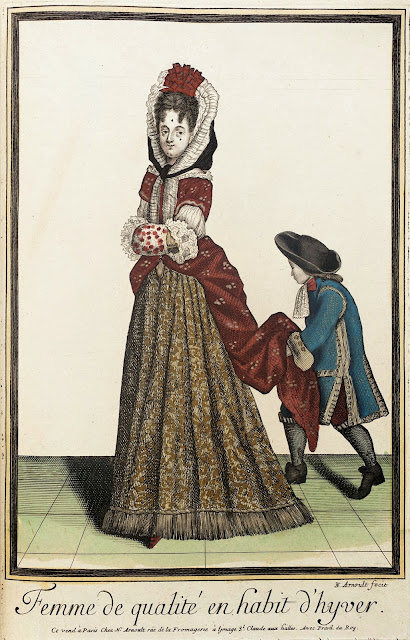 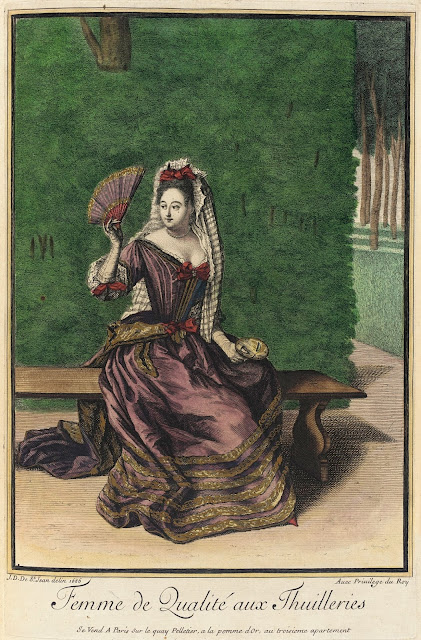 Three striped mantuas where the direction of the stripes are used for different effects. 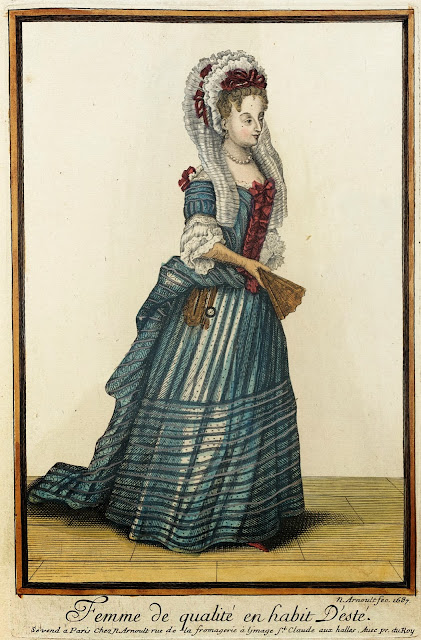 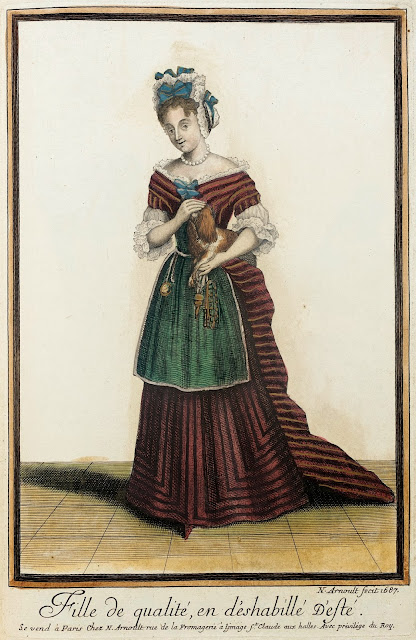 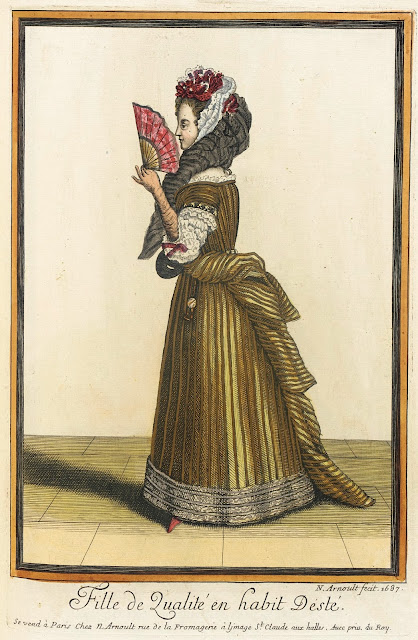 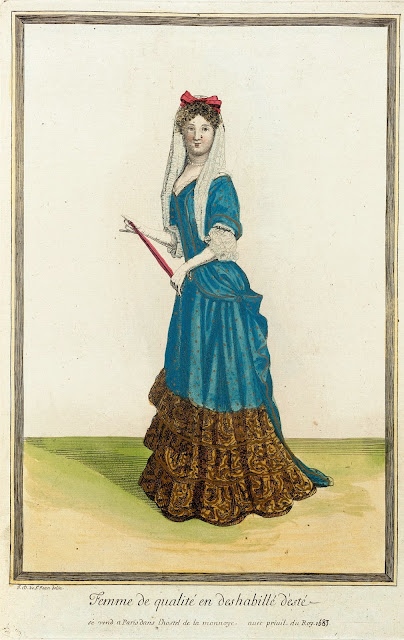 Mantuas were worn by the lower classes as well. They were shorter and the skirt didn't have to be bunched up over the hips. In fact, it is very easy to see how it evolved into the Robe Anglaise from these pictures. All comes from The Cryes of the City of London Drawne after the Life, from around 1688. 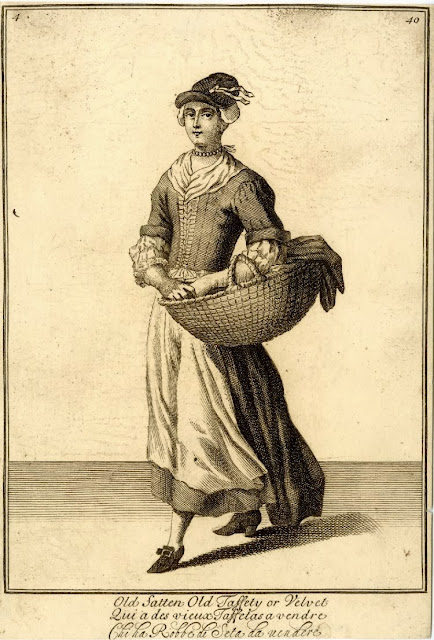 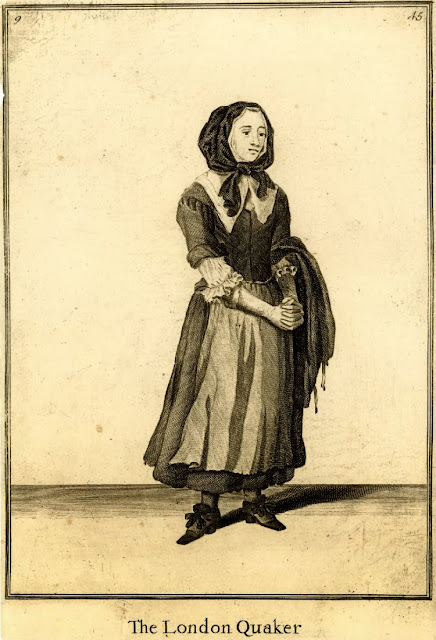 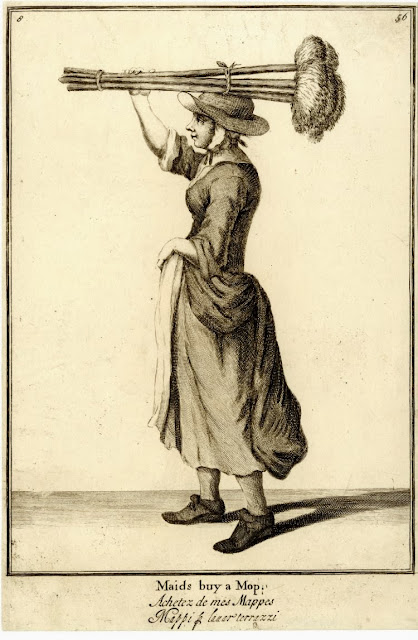 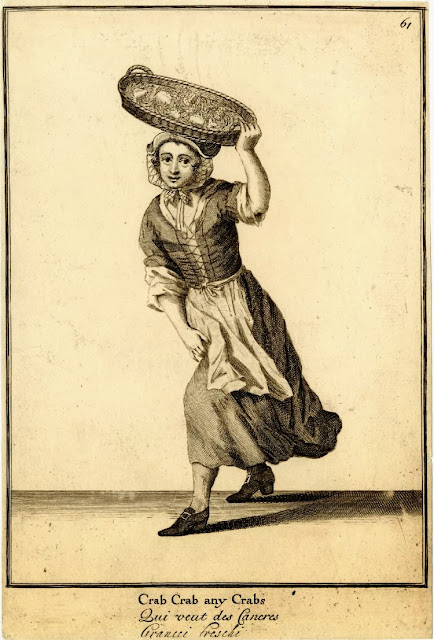 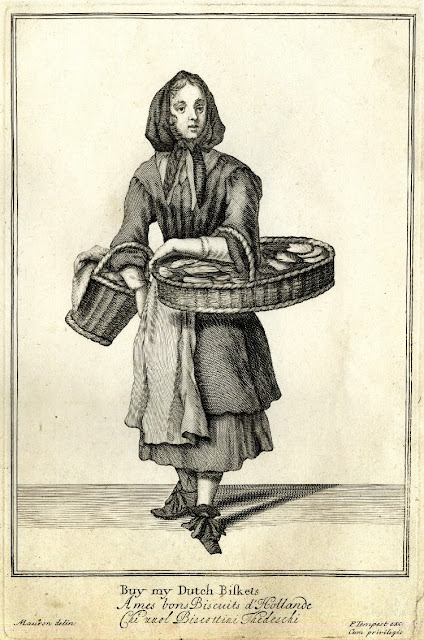 There was a fad in the late 17th century to be painted informally dressed in what was called a nighgown, gowns worn without stays and in reality not worn outside the home. Unfortunately that means that it is quite rare with portraits of women wearing mantuas from the 17th century.

In the 1690's the sleeves started to grow longer and it became more and more common that the front opened over a stomacher. Petticoats sometimes had a very deep flounce. Originally the neckline showed quite a bit of the shoulders and were rather triangular, now it grow squarer and closer to the neck.

The so called Kimberley gown may be the oldest mantua still around. It may look a bit drab, being made of taupe wool with woven strips. But it is also heavily embroidered with silver gilt and it must have sparkled very prettily when it was worn. When it was purchased by the Metropolitan Museum in 1937 it had an open front and the petticoat had a waistband. It has now been restored back to a closed front and the petticoat now has a draw-string. It has been dated to 1690-1695, mainly due to the longer sleeves and the embroidery design. A pattern for this mantua can be found in Norah Waugh's The Cut of Women's Clothes: 1600-1930. Her pattern is pre-reconstruction and she dates it to 1700.  Here are links to pdf articles about the gown.

The Kimberley gown may have a contender when it comes to age in the Valdemar Castle gown from Denmark, which is dated to 1695-1700. The information about this gown is very scant, but you can read more about it in Anéa's article about it, here. EDITED: There is a pattern of this gown, which can be found in Ellen Andersen's Moden i 1700-årene, fra 1690 till 1790 from 1977. 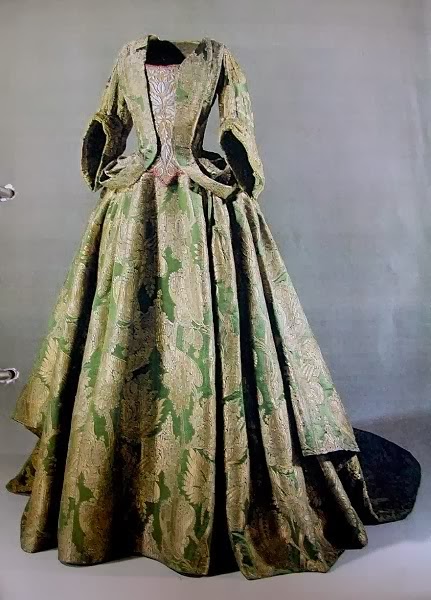 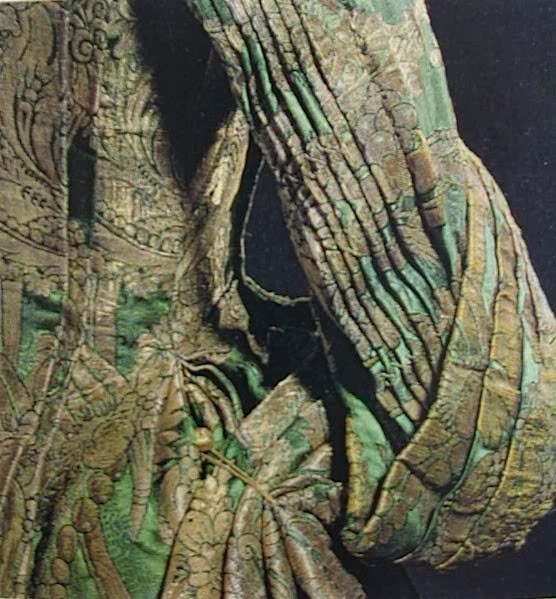 A midnight blue mantua from ca. 1700, gorgeously embroidered in gold. So beautiful and clearly designed to be worn over a stomacher. 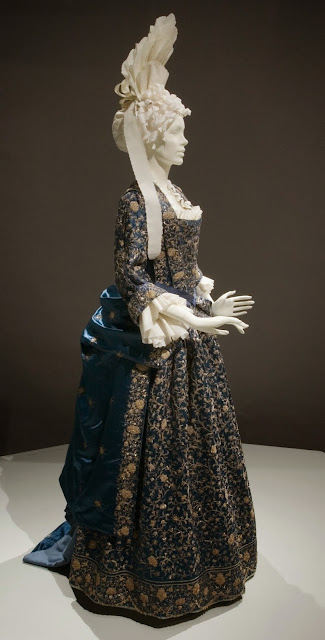 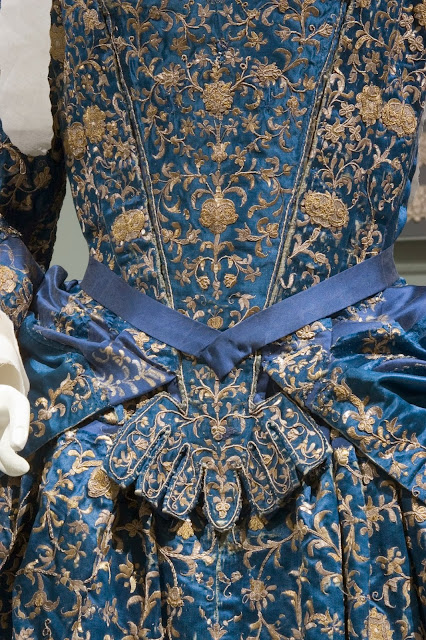 An extant mantua that seems to be virtually unknown is the one on the effigy of Frances Stuart in Westminster Abbey. It is said to be wearing her coronation robe, presumably for Queen Anne's coronation in April, 1702. Frances herself died in October he same year, A picture of the front can be found here.
The style is quite similar to this one.


A salmon pink mantua with a petticoat with two flounces, which gives it a wider siloutte. Paniers weren't in vogue yet, but there is a trend toward a fuller skirt profile. I'm uncertain if the stomacher is original or not. The style is different, it is quilted and embroidered, but the colours  matches the mantua very well. 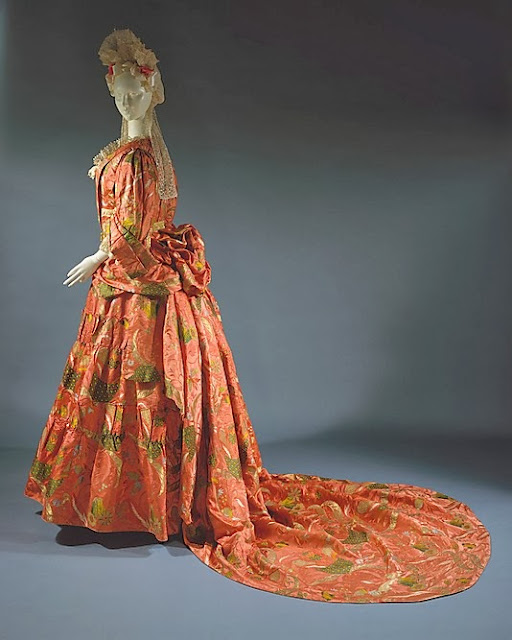 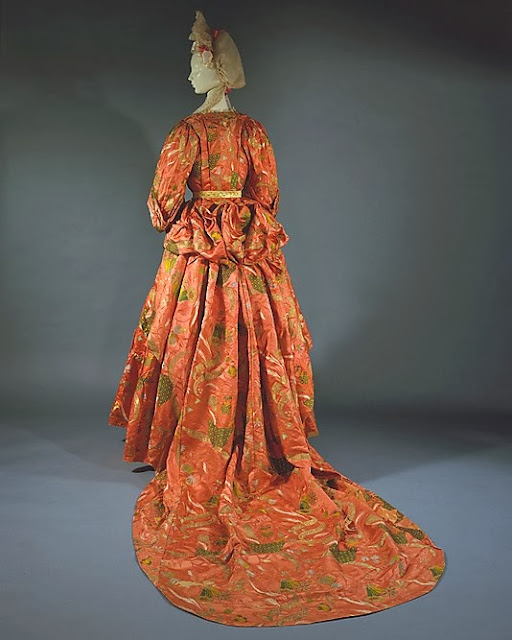 The Shrewsbury mantua has lost both stomacher and petticoat, unforunately. The pattern can be found in Janet Arnold's Patterns of Fashion 1 and differs quite a lot from the Kimberley mantua. The former consists of separate front and back pieces with set in sleeves, while this one is made from a continous length of fabric with a kind of kimono sleeve. The sleeves look similar to the Valdemar Castle gown with its tight pleating, but those are set in sleeves.. Arnold has also written a longer article of this gown for the journal "Costume", Volume 4, Number 1, 1970, which can be purchased here. Personally I find £15 a bit steep for one article, though. 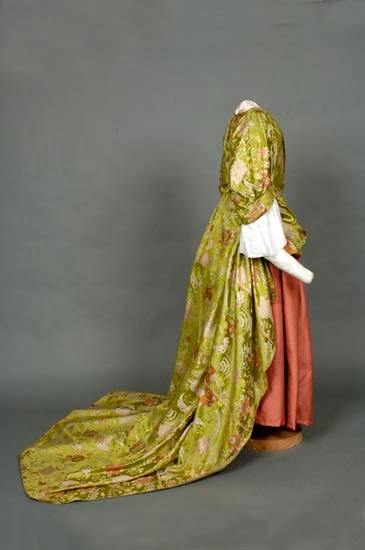 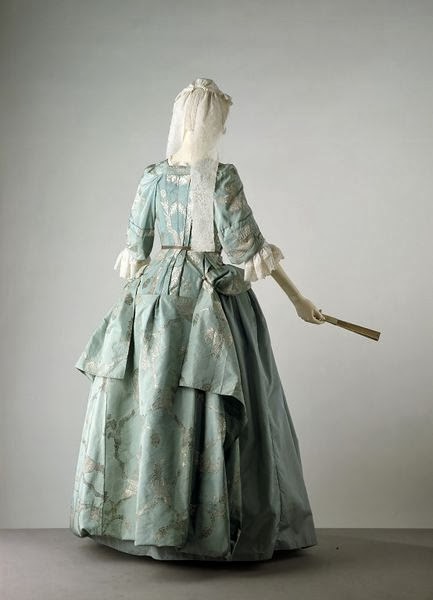 A Norwegian mantua with very little information and small picture. EDITED: Anéa has posted more photos and information at her Livejournal.

There is also a mantua at Nordiska museet in Sweden, but unfortunately there is no more information about it than this black and white picture from a book several years out of print.
EDIT: Some addtional information in a later blog post.
I could go on posting mantuas as they were worn for a couple of more decades, but as we are quickly moving away from the style of mantua I want to make, I will finish with this recently restored mantua in Lincolnshire. It is made from Spitafield silk dated to 1737. More information can be found here, here and a pdf article here.

I love these photos! I've been meaning to make a mantua for *years*! One of these days I'll get around to it. :-)

Deb: So have I... I am determined that next year will see me do it!

That blue mantua with golden emboidery is simply stunning beyond words. It's nice to see someone doing research on pretty unpopular dresses such as these! :)

Hooray for mantuas. Have been enamoured of them for years.

Natalie: Yes, they are facinating!

Ooo those stripedy mantuas are fabulous! I'm excited you're working on this style.

On the last dress, please can someone make a better stomacher? ;)

Kendra: Unfortunately I have three colour combination I want to make and can't decide... Oh well, I have a court gown to make first. :) And yes, that stomacher is just hideous. What were they thinking!

I keep returning to them (and this article, which for some reason I've never commented on before). It's a sad fact I have absolutely no excuse to make one and justify the cost because I would in a heartbeat! I think it all started with that gorgeous blue-and-metallic one, back when it was a Rate the Dress on The Dreamstress's site. Or possibly with a slightly mantua-ish costume on a beloved character in a TV fairy-tale. ;)

What fascinates me this time round are the lower-class mantuas. It's not only easier to see how it could have developed into the Anglaise, it's easier to see how the thing *works*. I think this is why I lve transitinal eras - and I guess that also explains why I love the mantua, because it *is* a transitinal garment in a way, isn't it?