After some consideration I have decided to start a new blog: Madame Isis’ Toilette, for posts about 18th century beauty and makeup. It may seem excessive as I have several blogs already, but I plan to work my way through as many beauty recipes as possible from the time and a special blog would keep my research sorted for easy access both for myself and for others. It won’t be a high volume blog, but if you are interested in 18th century beauty, then I think it may be worth following. And please, if you know someone else who is, spread the word around.

The look and content is very much as it’s beginning right now, so excuse the current boring look and lack of posts. It will change.

A plea for powdered hair

To change the colour of the hair with the help of powder wasn’t something invented inthe 18th century, but it was then it reached heights never seen before. The shiny fancy dress white wigs that many connect with the 18th century is an invention of the 19th century and when the silent movie came along, they adopted it. White wigs looks so much better in black and white than a real powdered hair would. Because a powdered hair doesn’t really look stark white. White powder on coloured hair gets various shades of grey.

I’m sure you have noticed by now that I have a special interest for 18th century beauty and I’m more and more seriously contemplating on trying more beauty recipes from the time. I was quite delighted recently when I found that Ageless Artifice has several new and interesting items like Spanish white for face makeup and more rouges. Unfortunately I also discovered that the shipping to Sweden now is a whopping $30, which means that the shipping would be more than what I can buy at one time to avoid taxes. So even if I love their products and am very happy that a company like that is around, they are not an option for me anymore. (Shipping inside USA is much lower.) So really, if I want to test old recipes myself, I simply will have to try them out myself.

A few months ago I made a FB-page for Fashionable Forties and have found that very useful. A nifty way to spread links to other interesting blogs and articles for example, or asking questions that doesn't really warrant a post on their own. So I made one for Isis' Wardrobe as well.

The girl who didn’t travel with Titanic

Perhaps it would amuse you to hear my own family history about Titanic, even if it is a short one. My maternal grandmother Greta’s family belonged to the working classes and in the early 20th century several members went to USA to try to make a more decent living. It didn’t take, by the 20’s they were all back in Sweden again, but in 1912 one of my grandmother’s aunts, Ingrid, was sent a ticket by her relatives in USA to come. A ticket with, no less, this brand new and fancy ship Titanic. Ingrid didn’t want to go, but you didn’t turn down a ticket to the States, so she went to Southampton to board. There she fell ill in pneumonia and was so ill that she couldn’t travel, so Titanic left without her and she went back to Sweden again. Pneumonia isn’t a song and dance, but for Ingrid it was probably very lucky, as she was a 3rd class passenger and it would have been very likely that she had drowned when the ship sank. 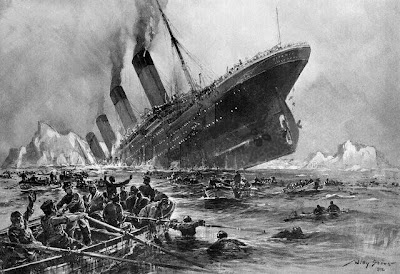