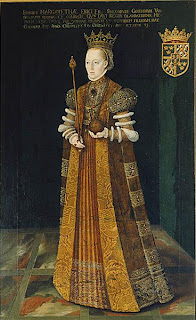 Gustav Vasa's second wife died when she was just 35, after bringing ten children to the world in 13 years. She was 20 years younger than her husband, but the marriage seems to have been quite harmonious. Margareta seems to have been a very nice, kind woman. She was buried in a gown of now reddish brown velvet, width 50 cm. The front and back has not been sewn together at the side seam. The front neckline has a 17 cm long slit, closed with a pin. The sleeves seams are not sewn together, and only partly sewn to the gown. Her shoes were made of five-shift satin, probably black in original, now reddish brown.

She also got new clothes for her husband's burial, also in black velvet but of a lesser quality than those of her husband and his first wife. (The new king, Erik XIV was from the first marriage. Perhaps he wanted to honour his mother with this, or perhaps just point out that she was of nobler birth than his stepmother, with whom, it seems, he got along with very well.) However, Margareta's new clothes were cut much more fashionably than her predecessor. For example, it had sleeves enclosed in puffs, which were sewn on the garment and were finished-off on the sleeve. The gown is decorated like Katarina's, but the gold lace was slightly narrower. At the neckline the initials "M R S" have been sewn made out of gold gilded silver. 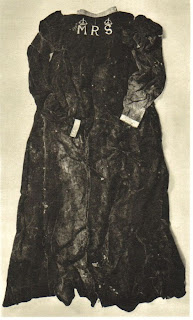 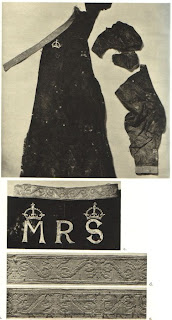 (Back of gown, the initials, and the gold lace) 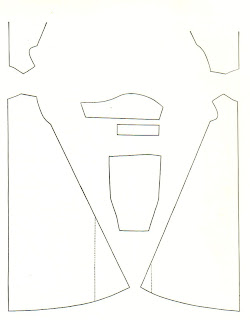 Originally she was buried with a gold gilded crown made of wax, and a sceptre of the same material. This is the oldest burial regalia that have been found in Sweden. It is much damaged but still visible are the letters KVNIGI:A...IS -- possibly it originally said "Queen of Sweden". It was replaced in 1560 with the same kind of regalia as Queen Katarina.

She also wore a pendant made of gold, shaped like a G and decorated with an emerald, a ruby, and six pearls. This piece is quite worn so perhaps it was a favourite piece that followed her to the grave. 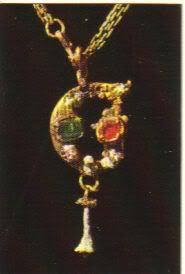 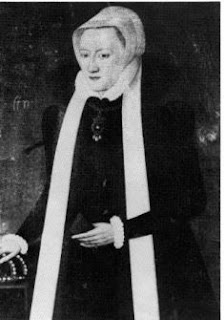 The last wife of Gustav Vasa was actually his second wife's niece, so she became stepmother to her own cousins, some of them older than she herself. She had no children of her own, but seems to have been beloved by her step-children. The gown she was buried in was made of velvet, now reddish-brown in colour. It was probably part of the living queen’s wardrobe and changed for the burial- the back has been removed, though parts of the back lining in reddish brown silk have been left. The cut is similar to Katarina of Sachen-Leuberg's gown. As the queen was a very old woman when she died I think one can assume that she had kept to the fashion of her youth, as I have not seen any gowns of this type from Swedish 17th century portraits.

The sleeves are narrow, consisting of two parts, and pinned to the gown. The rather high, round neckline is edged with a narrow strip of velvet. The gown is open in front with buttons of wood covered with braided silk spaced at intervals of 1 cm. Stockings in (now) yellow silk with a gore and a leg that is 58cm long. She also had velvet shoes, decorated with a silk bow, and leather soles. She also wore a crown made of pearls, strung on silver wire. 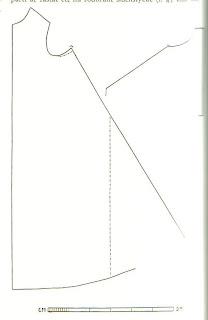 I just wanted to thank you for these posts, I love learning about places and times I'll never see.
Also these reminded me of the Sigrid Undset trilogy, Kristin Lavransdatter. I have read and re-read the trilogy many times and your post helps me "see" the books better.
Thanks so much.