This post and the next two are a revised re-post from my Livejournal in 2005. As it seems much more likely that if I give anything up it will be LJ and not Blogger, I have decided to re-post some of the more interesting things I have written. Here are the descriptions and pictures of clothes from the Swedish royal family in the 16th and 17th century found in the book Vasagraven (1956), edited by Martin Olsson.


Gustav Vasa and his family
Gustav Vasa became king of Sweden in 1523. He was elected king; he was born to the noble house of Vasa and ended up king after years of war. He can very well be considered the father of modern Sweden and it was also during his reign that Sweden became a protestant country. He was known to have a violent temper, but also to have been devoted to his last two wives. A fact is that several of his sons suffered from mental illness to a larger or lesser degree. He was buried with his three wives his son Johan III, and Johan's second wife Gunilla Bielke in the cathedral of Uppsala. The tomb was opened and examined in 1945.

Fashions at court in Sweden during the 16th century

Sweden had since the Middle Ages had a very close cultural and economical exchange with Germany. During the 16th century you can clearly see influences of German fashions in portraits. The most fashionable colour at court was black. At Gustav Vasa's court velvet was the most fashionable fabric, but when Johan III became king that had changed to be silk satin. In 1554 about 80% of the king's wardrobe contained black clothes, and it were twice as many velvet garments as satin ones.

Seams are generally pressed down and out. The seam allowances are narrow, between 0.5-1 cm wide. The most common types of stitches are running stitches, between 3-7 mm in width, and stem-stitches.

The shoes found, apart from Gunilla Bielke's had been part of the living persons wardrobe. They were either strap-shoes or court-shoes. Very slight, or no difference between right and left.

Extensive accounts and inventories of the royal family’s wardrobes are preserved, and from those the following can be concluded:

Skirts were not modern until after 1550.

"Överkjortel" is open in front, has sleeves, and is sometimes buttoned down the front.

"Vidkjortel" has facings and sleeves with many buttons.

"Ridkjortel" (riding habit) has front closure, bodice and skirt as one, and a collar.

"Underkjortel" is decorated in a way that shows that it was meant to be seen. Often buttoned over the chest.

My personal view is that the two first would be translated as gowns, and the last as a kirtle. Apart from Gunilla Bielke, all the queens’ clothes are quite similar in cut to the loose gown and kirtle in Janet Arnold's Patterns of Fashion.

The daughters of Gustav Vasa and Margareta Leijonhufvud had their clothes decorated so that the older the girl, the more ribbons and buttoned her gown had. 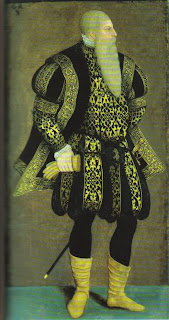 When Gustav Vasa died special burial clothes were made for him. He was dressed in a loose coat in black velvet, lined with silk taffeta. The velvet was called "from Lucca", which was the best quality. The fabric is 52 cm wide, and two lengths have been used for the back, and two to the front. It has a collar with straight corners and facing. The collar is 9.5 cm wide and the facing is 13 cm. The coat is open in front, and there is not any kind of closure. The collar and facing are decorated with crowned G's in gold gilded silver.

Underneath it he wore a plain rectangle of velvet, which reached to his feet. It had a round neckline and was tied around his neck, and around his back, called "bröstduk" (chest-cloth). This was an actual item of clothing, though probably lengthened to work as a shroud. The king owned several of them, meant to keep him warm- they were often lined with something that made them even warmer. There are notations of one in black velvet that was made into a pair of shoes, and he had them in different colours, white, red, blue and green and embellished with pearls and gold edging.

He also wore velvet gloves. Traces of linen on the legs might be the remains of a pair of hoses, but it may be just part of a shroud. The shoes were mad of black velvet, laced together with three lacing buttons made of silk, and soles of leather. Underneath his crown was a cap of black velvet, lined with black silk taffeta. It has earmuffs that have been folded in and sewn to the lining. The king is known to have worn a cap when he died, and it's quite likely that this is the one. A 1559 inventory of the king's wardrobe listed three black velvet caps. 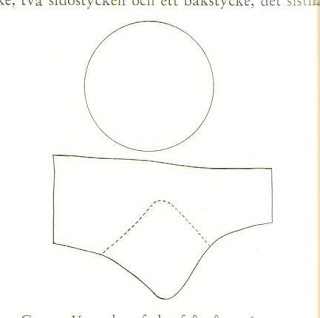 (Pattern of the cap)

Other items of clothing the king owned included "underkjortlar", which were somewhat like a waistcoat- no sleeves, or collar, and buttoned in the front. The king was buried wearing a gold gilded crown made of silver, and a sceptre of the same material. 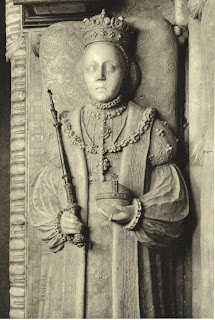 She was Gustav Vasa's first wife, and mother to one son, before she died quite young. When she was buried she was dressed in a burial robe of velvet, probably black, but now in reddish brown velvet. The width of the fabric is 51 cm, and the robe has a whole front piece, two side pieces, and a back piece sufficient to cover the shoulders. The collar is standing, 4.5cm high, and is part of the shoulder pieces. Opening is in front. The two sleeves are cut differently.

Three lengths of (now brown) silk ribbons were found entwined with the remains of the queen's hair, which suggested that it was braided with it. The ribbons are 0.7 cm wide, and 133, 68,7 and 65 cm long.

At Gustav Vasa's burial new clothes were made for the queen. The same kind of velvet was used as for his clothes, and has a front piece of the material's width and two back pieces just wide enough to cover the shoulders. The sleeves are sewn to the gown. Around the neckline, wrists and hem is a border of gold lace, 3 cm wide. Below the neckband her initials, made of gold gilded silver, are fastened. 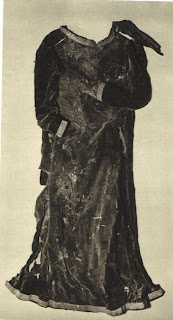 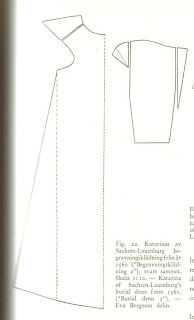 At the same time she was given a crown in gold gilded silver, and a sceptre of the same material. Her crown was lined with a cap made of gold brocade, made out of four triangular pieces.
Posted by Isis at 14:17

Isis, What a great post! What book is this from?

Marion. Thank you! The book is called Vasagraven (1956), edited by Martin Olsson. I don't think it is available in English.