My second attempt on 18th century clothes went much better and I’m still very pleased with it. Unfortunately I can’t close it anymore, but I still live in hope…

The jacket and petticoat are made in a pale blue cotton/linen blend. I have forgotten where I got the instructions for the petticoat, but its same pattern, or rather diagram, perhaps, that I have used ever since for petticoats worn over pocket hoops. The top is shaped so it dips CF and CB and then pleated onto the waistband, so when it’s worn the hem is straight. The pattern for the jacket is once again picked from Janet Arnold’s Patterns of Fashion, dated to the mid-18th century.


By this time I had a new pair of stays that fitted much better which made it much easier to fit the jacket. There are still a few problems with it, though. The neckline is much too wide, though it’s possibly to hide that with a carefully draped neckerchief. The jacket is also too long in the waist, which makes it crease at the waistline. Nowadays I have perfected an 18th century basic bodice patter that I use as a template for everything I do, but at this point I was still struggling to get it right.

The first reincarnation before I had decided on closure. I didn’t much care for that look. 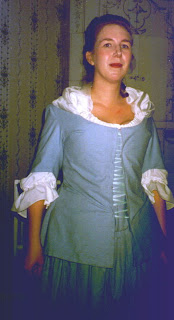 It became so much prettier with rose-coloured silk ribbons. 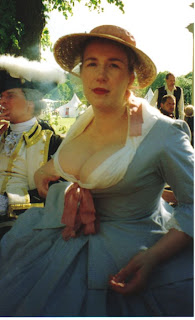 Back then I didn’t have enough petticoats either, as the visible pocket hoops can testify of… 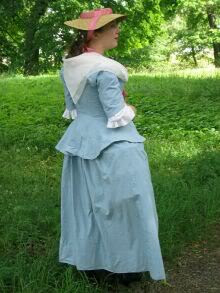 Ah, I remember that one, I borrowed it for my first event in GS :D
I think it's a very cute outfit :)

Yes, it's still very pretty and a costume to be proud of.