Resarch for a 1520's gown, part 2: the other necessary clothes

The 16th century is a completely new period for me sewing-wise, but it was actually one of my first costume-loves, and I’ve always wanted to go there. I think I have a basic understanding of the period, but I still have a lot to learn. And I have a whole wardrobe to build! I mentioned Katafalk’s blog in my last post, and I will reference here several times because she’s worth it. She’s a brilliant Swedish seamstress and she has several excellent tutorials. I have, for example, found her post How to Frau, very helpful as it in a very pedagogic manner goes through the necessary layers and clothes.

I’m planning to build my wardrobe the sensible way; inside and outwards, so the first garment I’m going to make is the smock. 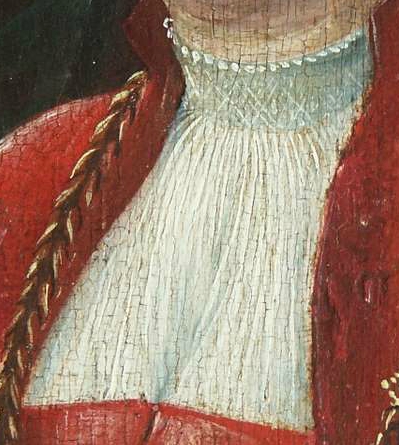 As you can see she is wearing a high necked, pleated smock which what looks like whitework around the neck. You can see similar smocks on many portraits of the period. At least I think they are smocks and not partlets.

For example, this portrait of Margareta Eriksdotter Vasa looks similar, but her gown is extremely low-cut, so it seem more likely it’s a partlet we see here. I include this because Margareta Vasa was Gustav Vasa’s sister, and the portrait is dated to 1528. It may have been painted in Lübeck, but at this point, Gustav Vasa was still unmarried, so Margareta was the most important lady in Sweden, and it’s likely her clothes reflect what was fashionable in Sweden. However, even if I the clothes I aim to make belong to a well-to-do woman, I’m not trying to be royalty.

I’ve found two tutorials for a high-necked smock, one by Katafalk and one by Genoveva von Lubeck. I’m going to use Katafalk’s.

As for stockings and hose, I’m going to sew a pair. I’m fairly certain you could get knitted stockings at this time, but I’m not very good at knitting, so sewn ones it is. I have found a tutorial at Melanie Schuessler’s webpage.

I’ve never seen any references for stays this early in the 16th century, and ladies seen in profile are often quite curvy. But I definitely need some kind of support, and the answer to that is an underdress or kirtle. The Queen’s Servant by Caroline Johnson, edited by Jane Malcolm Davies and Ninya Mikhaila talks about clothes at the English court in the early 16th century, so right time, but the wrong place. I still think the notes on kirtles have relevance for a wider area, and I will use the instruction in the book on how to construct it. The book mention kirtles interlined in the bodice by one, or for larger ladies, two layers of canvas to provide support, which I will do. I have not decided on fabric and colour yet. The Queen’s Servant has found that silk sateen and black was the most popular choice at the English court, and I’m tempted to use that. As I mentioned in my last post black and silk satin was in use at Gustav Vasa’s court, but I don’t know if it was used for undergowns. And I don't know how far down the classes the material went.

The lady on my pictures is wearing a short shoulder cape, a gollar, in the same fabric as the gown. 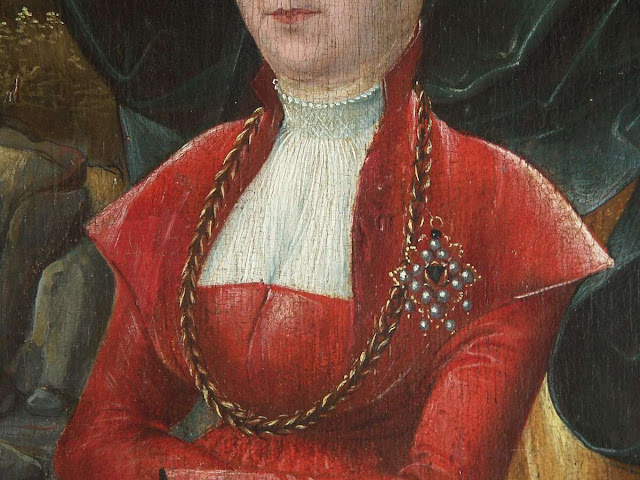 You can see this garment on a lot of pictures, Like here, for example.

It’s possible this short cape could was a way for women to distinguish themselves as decent women when they didn’t wear a long cloak. In Denmark in 1522 prostitutes were forbidden to cover their hair and wear “kåber” (cloaks), and in 1529 the same law came in place in Sweden, though the term there is “kragekåper”. I’m aware I’m making assumptions here, but “krage” means collar, so I think it isn’t impossible “kragekåper” can mean a very short cloak. (Klædt i rigets borgerdragt by Camilla Luise Dahl)

And as Katafalk has a tutorial for one, I will use that.

Then we come to the cap. And I admit I have no idea how it’s constructed. Or rather, I have ideas, but I don’t know how close to correct they are. Input is most welcome! 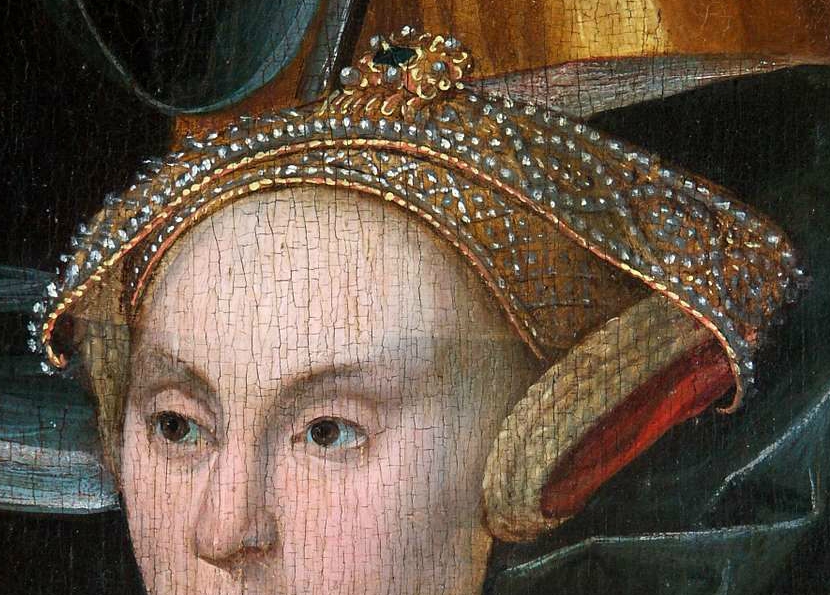 You can see a very similar cap here.

And a somewhat similar one here:

I assume it is actually in two parts. Or three. An inner cap, caul or forehead cloth which sits tight around the head. Then the wearer’s braids are would like some kind of pillow(?) at the temples. And then another cap or possibly wide band is placed on top of it. Women n at least Denmark wore caps with a wide band placed on top of it, so I think it may be what we see here (Huffer till Theris Hoffueder: Sen-renæssancens Kvindehuer, ca. 1560–1630 by Camilla Luise Dahl)

I’ve no idea what it looks like from the back. I would love to recreate this cap if I can only figure out how it was plausibly made. In any case, I think the inner cap may be similar to the one Genoveva von Lubeck has a tutorial for.

Another alternative is to make a wulsthaube with a veil. Katafalk has tutorials for it here, here and here, as has Genoveva von Lubeck, Amie Sparrow and The Fresian Frock Girl

Regardless of what kind of cap I make, I can also go for those nifty wide brimmed hats you see so often. Genoveva von Lubeck have a tutorial for that too.

The next post will be about the things I cannot make myself, shoes and jewelry.

And if you are interested in another take on the same problem, check out Costumekullan who is also planning a Swedish 1520’s outfit.