Busy as I am sewing my Victorian wardrobe, I still have plans for the future. And as I was recently reminded of how practical a blog is to keep track oofresearch, this post is posted now for future references.

In November 1520 and event happened in Stockholm which can be seen as the starting point for modern Sweden. After years of political struggles ,the Danish king Christian II was crowned king of Sweden. In the days after nearly 100 people; noblemen, clergy and townsmen were executed in what became known as Stockholm Bloodbath. Many of their female relatives was imprisoned and brought to Denmark. The claim had been made that Christian had the body of former regent Sten Sture the Younger and his son taken from their graves and mutilated and burnt. There is also a ghost story which says that if it rain the night of the anniversary of the massacre, the rain will turn into blood at the square Stortorget were the executions took place. Perhaps not so surprising Christian II is known as Christian the Tyrant in Sweden.

One of the purposes of the massacre was probably to scare the swedes into submission, but it backfired with a vengeance. The nobleman Gustav Vasa, whose father had been killed in the massacre, led a revolt, which ended with him being crowned king of Sweden in 1523, starting te Vasa dynasty which ended when Queen Kristina, his great-great granddaughter abdicated in 1654. Gustav Vasa, like his contemporary Henry VIII, initiated a reformation, making sweden protestant which it remain today. He also had several wives, but only three to Henry’s six, and none of them was executed or divorced. He also had better luck with sons; three of them became kings of Sweden.

So, after this history lesson, you can probably guess that in 2020 the 500th anniversary of all this takes place, and there will very likely be several historical events. Which means I need an outfit which could plausibly have been worn in Sweden in 1520. Unfortunately, there aren’t many pictures of Swedish women from this period, but as Sweden had strong economical and political bonds with Denmark and what is now Germany, I decided to looks at pictures from those areas as well, choosing a time span of roughly 1500-1540.

And fell in love with this one.

It’s dated 1500-1520, but I think the date is closer to 1520 than 1500. I usually don’t copy clothes, but this is so pretty I can’t resist. It’s part of an altarpiece, but given the difference between the kneeling man and woman compared to the middle painting, I’m fairly convinced this is an actual portrait, probably of the couple who sponsored the painting. 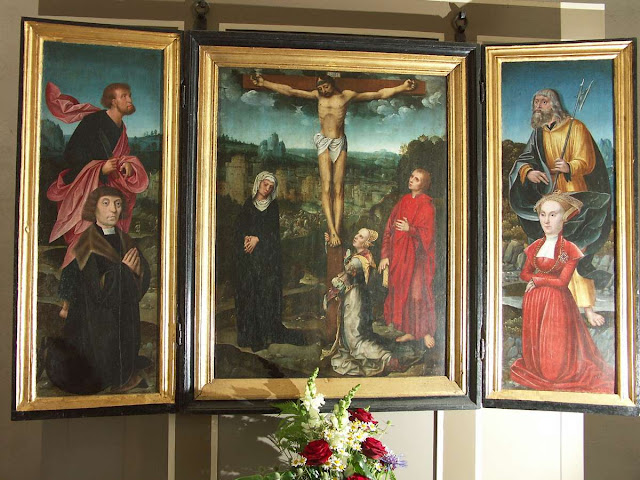 It may have been painted in the Netherlands, or possibly just by a painter from that country, which is the wrong place. So I looked around to see if I could find similar gowns the area I'm interested in. And I found several with a similar silhouette, but usually fancier in style.

These gowns look very similar to the one I want, minus the gollar.

I think it’s plausible to say this is a style which could have been worn in Sweden. As for construction, I think it looks like it’s closed at the front. As the top of the sleeves are hidden by the gollar, I think it may have a pouf there, but there are completely plain sleeves too. I haven’t decided what I want yet. I plan to use wool, even if silk or velvet are other possibilities.

I have some information about clothes worn at Gustav Vasa’s court, which of course is later than 1520. Black was the most popular colour, and velvet the most popular fabric, though silk satin was also in use. Seam allowances was 0,5-1 cm wide, and the seams generally pressed down or outwards. They were sewn in running stitches, between 3-7 mm in width, or stem stitches. (from Vasagraven (1956), edited by Martin Olsson)

And what about extant clothes? What we have is very scant, and none for Sweden. The most famous one is the gown of Mary of Hungary, dated to 1510-25. It doesn’t look anything like the gown I want to make, although the back may be similar. 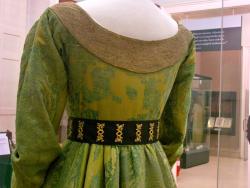 There is also the gown of Anna Jaigellon of Poland, ca 1547. Again it doesn't look much of what I want to make.

I will also need a smock, hose, a kirtle, headgear, gollar and jewelry. But this post is long enough as it is, so that will be in part 2.

Do you have any other recommendations for must-reads?
Posted by Isis at 21:03

Since I'm working on a similar project, for exactly the same reason, may I suggest my own blogpost where I gathered some of my inspiration. https://costumekullan.blogspot.se/2018/01/some-thoughts-around-my-1520s-outfit.html

Bascically I've tried to limit my influences to the Baltic coast, and not down to southern Germany.

bandykullan: What fun! And that's a good point not going down south. :)

I also suggest that you read my 2011 Costume article on women's dress in 16th century Sweden.

Eva: I most certainly will!