The Swedish national gown in the 18th century


This is the year of the Swedish national gown for me, so I thought it wouldn't be amiss with a more throughout post about it than I have done before. I am leaving the men's suit out of it, but I can tell you that though the ladies weren't that keen on their gown, the suit was rather a success. The idea of a national suit was something that cropped up all around Europe in the 18th century, but it was only in Sweden that it was actualized. Gustaf III felt strongly about the subject and there are very strong indications that he designed them himself. If he didn't, he sure did have a lot of influence over the process, because the suit was certainly made to fit his preferences for clothes that weren’t too tight and with the handy cape that hid some slight deformities in his body. His interest in history and historical fashion is also evident.

The women's gown consisted of three parts, a sleeveless bodice, a petticoat worn over pocket hoops and a robe. They were all trimmed with a pleated trim in the same fabric and there were also a belt and bows in a contrasting fabric. The fabric could be of various colours, but even if the fabric had a pattern, the colour should be solid, i.e. woven into the fabric like the extant gown. The robe was originally cut like a polonaise, but both pictures and the remaining extant gown are cut like an anglaise. The poufy sleeves and a standing collar were the largest deviation from the fashion of the day, but even from the start, ladies could opt for a small white collar instead. There were also numerous rules for how a gown should look, depending on the wearer’s status and when it was to be worn.
The court gown
The big difference between the court gowns and the common gown was the sleeves. A lady who had been presented to the king wore white gauze sleeves with a lattice work of the robes fabric over. The trail was also longer and looped up a bit differently than the common version. For everyday court business the gown was black, apart from the sleeves and the bows and belt were in a colour that indicated which court the wearer belonged to. Red for the King, although it seems that pink could be worn as well, if one looks at portraits, blue for the Queen and yellow for the Dowager queen.
Another lady attached to the King's court.
For grand balls the gown were originally meant to be bright red with white belt and bows, to honour the Queen's Danish heritage, but it must have been clear very early on that bright red wouldn't be the best shade to put a whole court in and there are no evidence that the red version were ever made. Instead the gala version became white with pale blue bows and belt, nicely complimenting the men's suit which was pale blue with white details.
There are no paintings of the gala version as it is described; this portrait of Queen Sophia Magdalena seems to be the closest. The lattice sleeves are decorated with gold and so it the robe, which seems to be in a patterned fabric and is not trimmed with pleated fabric. The bodice is blue, and not white.
There was also a third version meant for the countryside, known as the Eksolsund's gown. It was in a pale yellow with blue details and for young ladies it deviated from the standard cut as it was supposed to be made like a riding habit. Older ladies wore the ordinary bodice/petticoat/robe combo. There are stories on the problems the court had when they were residing at Drottningholm castle as the castle itself demanded the back version, but if they were to go to the Chinese pavilion in the park, the Ekoldsund's version were to be worn. The king advertised the clothes of the day by putting a card on the door to his room, but he often changed his mind several times, so the court had to keep a vigilant eye on the door so to not show up in the wrong clothes.
I have never seen a portrait of a lady wearing the Ekolsund’s gown, but here is Gustaf III’s son, Gustaf IV Adolf with his wife Fredrika in the early 19th century in the male version, just to give you a sense of the colours.


The common gown
With sold sleeves and a shorter train, it was very easy to spot the common gown. In theory it could be made in any colour, as the male suit seems to have, but there are only records of black, blue and grey ones. The one remaining gown is just in the common version and was made as a wedding gown for Sofia Lovisa Brüch in 1780. The bows and belt are reconstructions.


Lady in the common gown with striped bows.


There were also gowns that, even if they weren't strictly cut after the national gown, still took their inspiration from it, like this charming one it patterned white/yellow silk/cotton. 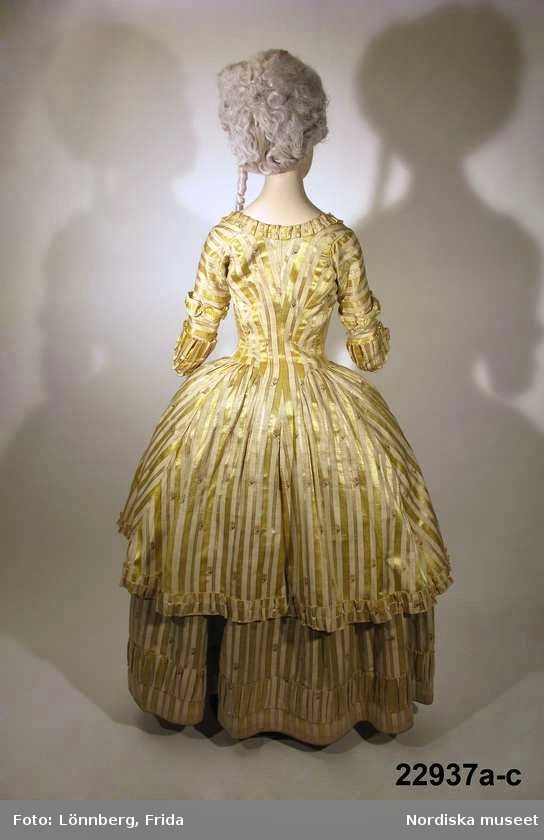 Or this black one. The bodice in those gowns are discarded and the pouffy sleeves changed for more fashionale slim ones.


Perh Hilleström paintied several paintings with peole dressed in the national suit and gowns. On the first you can see a seated lady belonging to the King's court and a lady in a grey common version. The lady arriving is also wearing a black national gown, though you can't tell if it is the court or common version.

I understand the different stylish versions of the basic pannier gown and frock coats in Europe; but, to demand one particular style and colour! No other monarch really demanded so much from his court -- not even the Georgians or Louis XV and XVI. This is monumental hubris on an enormous scale. Did he have severe psychiatric issues? (Yes, I am an American. I am sure it shows.) What happened when the Bernadotte Dynasty took over before the end of the Napoleonic period?

Julia Ergane: I think he had huge control issues and needed to have his fingers into everything. :)He was an interesting personality, to say the least- in his revolution he took back all power to the crown as oppsoite to other revolutions in the 18th century. But he was also a rather progressive politican who allowed a (limited) religious freedom and promoted the middle class over the upper, which is why he got killed. He was succeded by his son and then his brother and the male version lived on for their reign, but the female version quickly discarded except for certain ceremonies. It did change with fashion though, what lived on were the black colour and the sleeves. As such it was in use until 1973. I will be making another post on that soon. :)