I made these stays for The Historical Sew Fortnightly 2014, challenge #4, Underneath it All. It is also a project to cross off my UFO list, I cut these out in September 2012, but didn't start with the rest until January this year. 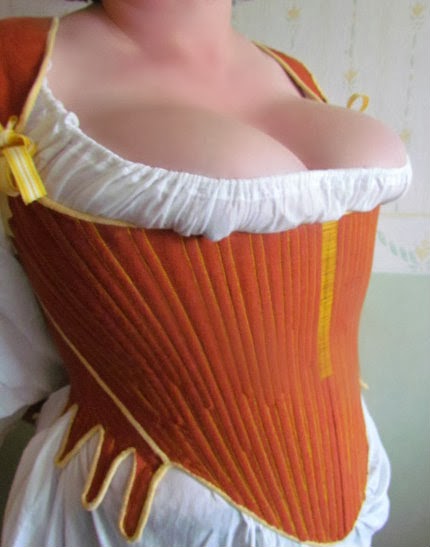 I'm not altogether pleased with them. It's years since I tried making stays that are just back-laces, so I had to make a new pattern. As I have a large bust, a narrow back and an extremely narrow rib-cage, stays patterns are a bit hard to make. And though I made this pattern even more narrow in the back and wider on the top front, you can see that it needs more room there, while still being laced shut in the back. I blame the linen for that, though, and also for the straps being too long- I had shortened those, because linen do stretch a lot. I thought I had accounted for that, but evidently not enough. I also feel that the front bottom looks a bit clumsy. I should have divided the front and made it with 9 pattern pieces instead of 7 and re-shaped the front to a more elegant point. 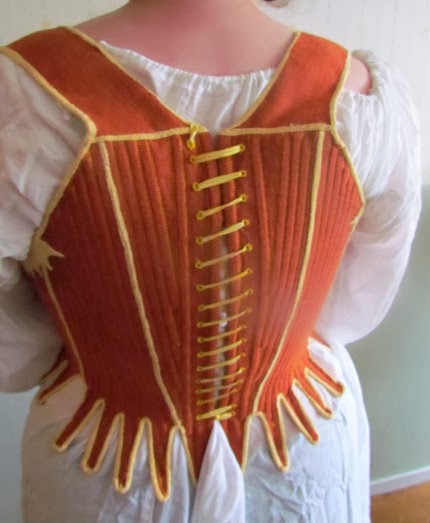 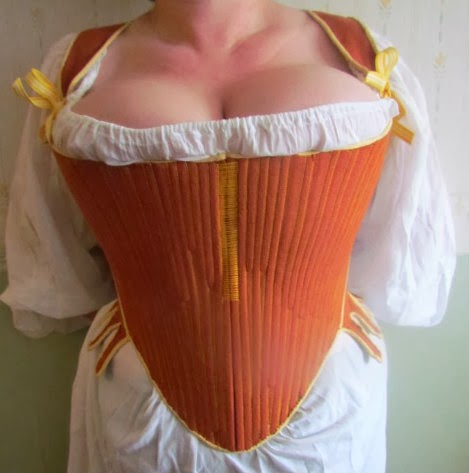 But the linen canvas and the plastic whalebone provides good enough support and I think they are rather pretty. I was inspired by these stays:

The Challenge: #4, Underneath it All
Fabric: Brown linen for the top layer and linen canvas for the bottom layer.
Pattern: Self drafted, but heavily influenced by stays in Jill Salen's Corsets.
Year: C. 1780
Notions: Yellow buttonhole thread for the boning channels and lacing holes, plastic whalebone, chamois leather for the binding and some yellow ribbons for the lacing.
How historically accurate is it? Well the pattern is quite correct and the linen and chamois leather. However, the boning channel are made by machine as my hands can't handle sewing them. The binding are made by hand, though.
Hours to complete: No idea.
First worn: For these photos.
Total cost: Don't know. The linen canvas, the chamois leather and the plastic whalebones were from my stash and I have forgotten how much the brown linen cost.
Posted by Isis at 17:25

Oh, they do have tabs on the back. Very nicely done. :)

sewingempire and Isabella: Thank you so much!

I love the way you did the boning in the front, the top and bottom pieces creating a curve at the waist. It's beautiful. Was that your own idea or was it from a pattern? Also, how comfortable is it?

The Dreaded Seamstress: Thank you! Well, a bit of both. The boning channels radiate a bit, but then I thought it wouldn't support my figure as much as I need, so I crammed in some extra boning in between. The stays are my most comfortable pair yet, but then this is the fifth pair I have made from the same pattern, which I tweak a little for every new sewing project, so it fits my body very well now. :)