Are leather stays controversial? I sometimes encounter that view online, which have always puzzled me as I know there are extant ones around. Perhaps it is due to regional differences, what was common in Sweden wasn’t common elsewhere. There are several extant ones in Swedish museum collections and they seem to have been popular as working stays and for children. The ones in this post are all located at the museum Nordiska in Stockholm, but they are not the only one. There are, for example, a pair of children’s stays in Gotland who are cut and boned like adult stays and have also decorative stamping that mimics the look of fully boned stays.

The stays in this post range from fully boned stays, half-boned and what are more unboned bodices, though they shape is similar. In the 18th century women in the rural areas of Sweden wore what in the next century would be called folk costumes. They varied from place to place, but an essential look was a shift, several skirts and a sleeveless bodice. In fact, quite close to what is sometimes called “wench-costumes”. These bodices were, and are, cut like stays and could be quite heavily boned, or not boned at all. Not all of them were made out of leather, of course.


Dated to 1750-70, though my personal view is that they are earlier.  Made of chamois leather with lining in coarse linen. Much mended with linen in various qualities. Fully boned with whalebones. Enforced with sturdier whalebones around the waist and across the bust. Cut with a front that narrows down to a point and is laced in the back. The shoulder straps are sewn to the back and tied to the front. There are traces of silk at the seams on the inside, which may indicate that this was originally a bodice in silk that has been covered with chamois leather.

Nordiska also have a pair of leather stays that are, so far, not photgraphed (NM.0109352). They are, according to Britta Hammar and Pernilla Rasmussen in Underkläder, made for a young girl. The museum dates it to 1720-29, though the stays itself are marked with "Anno 1687", ie, the year 1687. They are front-laced and in dark brown leather, edged with chamois leather. Made out of four pattern pieces with a seam at the center back and side-back. 12 tabs. It's a bit unclear if there are any boning left at all.

﻿
Stays in light-coloured chamois leather, 1750-60. Front-laced, 10 pattern pieces with 20 boning channels. Boned with whalebone. Has been altered to be smaller by a new seam in the back and the front folded back with new lacing holes made. Possibly originally boned with iron boning at the lacing. Lined with unbleached lining. Has been owned by a Sara Hazelius, wife of a dean. 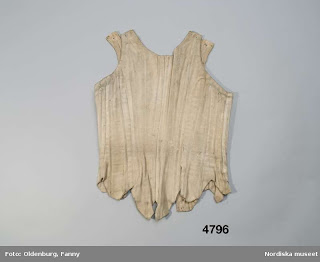 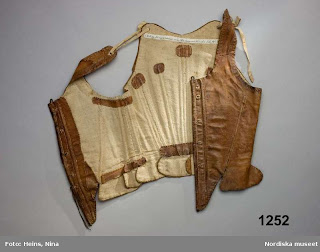 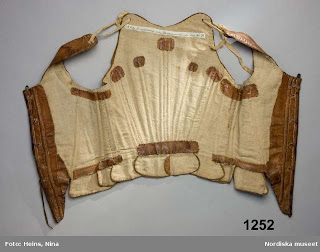 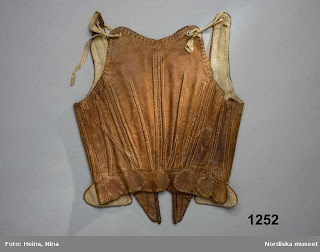 ﻿
Dated 1750-1799. In brown stamped leather, but no bones, though the shape is similar to boned stays. The stamps are very decorative and depicts, for example, straight and wavy lines and bows. 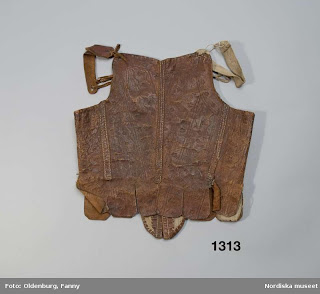 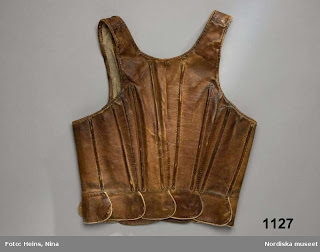 ﻿
These are undated and lack other information as well, but due to the high waist I think that they are from the 19th century. I have included them anyway because of the boning that harks back to the 18th century and for the bummroll attached on teh inside, under the tabs. 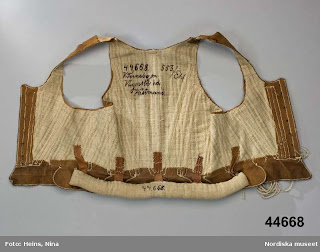 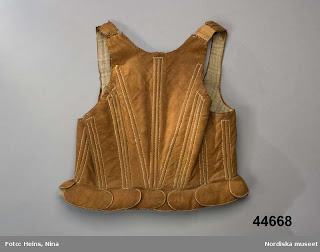 ﻿
﻿
Bodice in pale chamois leather, 1750-90. Boned at the lacing with iron, the diagonal channels are boned with reed or something similar, so are the three boning channels in the back. Overlapping tabs. Edged with white leather. Front,, neck and armhole decorated with pinked white leather. Lined with unbleached linen. Said to have been made as an engagement gift. 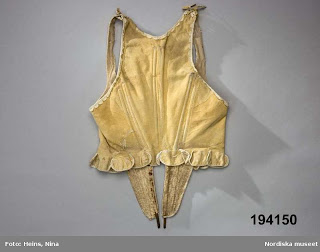 ﻿
Bodice in leather, seemingly unboned, but cut like stays, 1763-1773. Worn by Helena Olosdotter, a farmer's daughter, as a young girl. 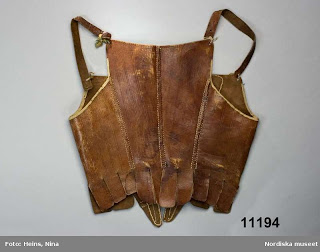 I would like to make myself a pair of leather stays, because they seem to be quite comfortable. Front-laced with a few bones at critical points seems to be the most common ones. Well, I have time to think about it, I have plenty of sewing projects to make first.

Read more on other blogs:

I do think the "controversy" is a matter of location. Particularly in the South-Eastern United States, there isn't a great deal of information on what rural people wore in the eighteenth century. I'm a fan of leather stays and think that they were worn far more frequently than is generally accepted in my country, but it would be nice if an extant pair materialized to prove that. Thank you for the link! I haven't seen two of the pairs you've included from the Nordiska Museet before. The stamped leather pair are fascinating!


BTW - I nominated you for a very inspiring blogger award! :)

I don't know that I've noticed leather stays before, so I do wonder if this was a Swedish trend? I just ran a quick search in the old bailey court records, a good source for lower class London clothing, and nothing came up where stays were described as made of leather -- but then there were many where they didn't state what the stays were made of. I wonder if Diderot mentions anything?

You inspire me, and I've given you an award. http://www.freewebs.com/dragonflydesignsbyalisa/apps/blog/show/25392712-i-ve-won-an-award-

The Choll: I'm sure you are right. I guess that leather stays usually were worn out. They seem to have been quite comfortable and when I can allow myself new projects, those are high on my list.

Loren Dearborn: Thank you so much!

Kendra: There are mentions of leather stays in Sweden in both 17th and 18th century texts and with so many of them preserved, especially as they clearly are meant to be working in, I guess they were very common here. But I wonder why it was a Swedish, or possibly Scandinavian trend. They seem quite practical, sturdy and supportive without the need for massive boning to give support. I think I need to read Diderot a bit more carefully. :)

Alisa: Thank you so much!

Kendra: A bit belatedly it occured to me to check Google books and I found this: "Was held a general quarterly court of the governor! of the Asylum, when seven girls were admitted between the age as eight and twelve years, and seven were refused, not being thought proper objects ; and at the fame time, orders were given for the children in the Asylum, to be immediately supplied with leather stays. More girls have been admitted since"

In London Magazine, 1758. So poor children in leather stays then. :)

And in 1771 a mention on a country wench in leather bodice.