I never really made a fancy 18th century gown, though I have been a member of Gustafs Skål for 12 years. (Yikes, is it that long?) This year Gustafs Skål turns 20 and there will be celebrations and it would be fun to have something really nice to put on and a gown like that have been on my to-do list for a long time. So it wouldn't make me deviate too much from my plan to not starting a lot of new projects this year, especially if I use fabrics from my stash and not buy new. This leaves me with two options.

First, a green/blue (dominantly green) shot taffeta that was bought to the express purpose to make a ball gown. I have been dithering to and fro on cut and eventually ended with my first plan, to make it into a piemontaise. In case you have missed this rather uncommon 18th century gown I can tell you that it is basically the love child between a French and an English gown. The back-pleats is actually a separate pattern piece, mounted on the gown.

It would be fun because it would be a new pattern and also because I could decorate it along the lines of this dress, which I have always liked, though I think I would like some gold details.


Then there is the option in doing something 1790's along these lines.

As for fabric, a couple of years ago I made this 1790's outfit with a taffeta skirt and velvet jacket. 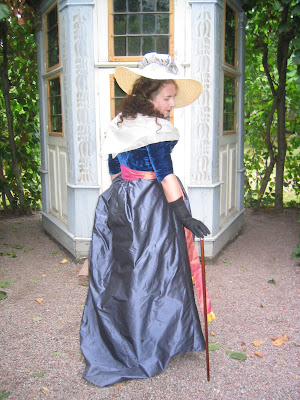 I actually have enough of the blue-grey taffeta so I could make a matching bodice. It would mean that it would be in two parts, which probably isn't truly period, but with a sash it wouldn't be noticeable.

It would definitely be the easiest option as I have a true and tried 1790's bodice pattern. However, I would need to embellish it, which would take time as well. So at the moment I'm undecided on which one I should make. What do you think?

No one loves the pietmontaise, so it would be a true act of charity to actually make it!
On the other hand, 1790's is what I have on my mind myself , so I'd lean towards that as well.

Sorry - no help from me!

I vote for the pietmontaise, I love the mix of the slender lines from the English gowns mixed with the watteau pleated loose panel. And I think your decoration idea is really pretty.

I envy your stash a little, the only gown length silk I have in my stash is the pink/purple dupion for my polonasie. I'm really looking forward to make it, but I would love to make a proper ballgown too...

Love the pietmontaise idea--because I love seeing things done that I've never seen before! Plus your color and design ideas sound brilliant.

Thank you all for your input! The piemontaise it will be. :)