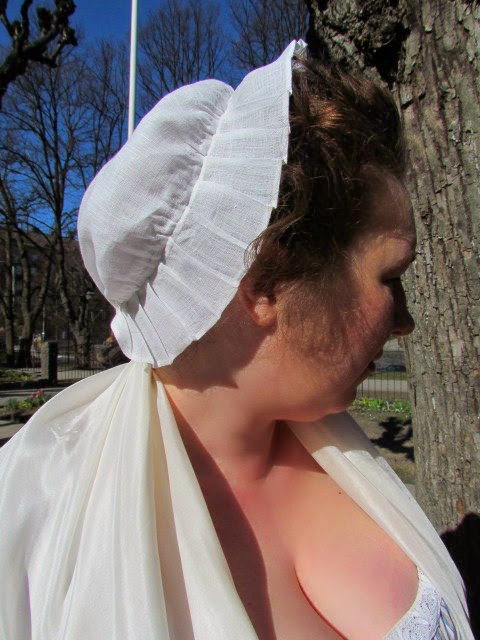 My cap is done and though it turned out OK, it did not turn out the way I wanted it. It doesn't matter much, though, because I need several caps and the way this one turned out, it works very well for some of my clothes. I was aiming to make a small wired cap, suitable for the period 1740-60, the research can be found here and here but as you can see it isn't that small and more suitable for a lter period where a wired brim doesn't seem to have been popular anymore. So I decided to just starch the brim and leave it as that. My original plan was to make the wired cap with a lace brim, but decided on linen because I found that I had no leftover lace at home, so I'm not sad, now I can make it the way I wanted it to begin with. As I starched the brim, it did stand up a little on its own anyway. 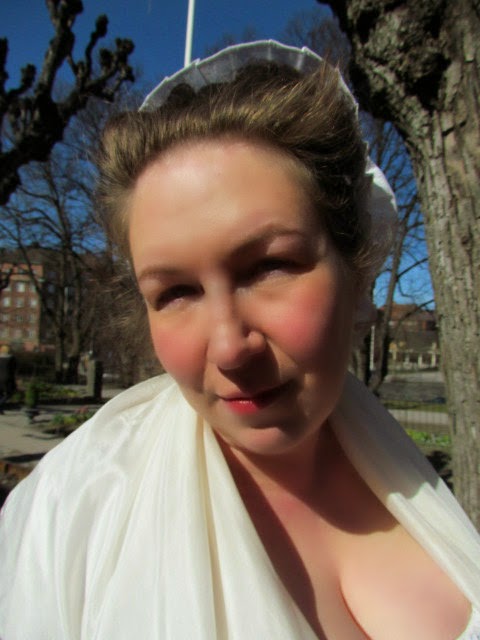 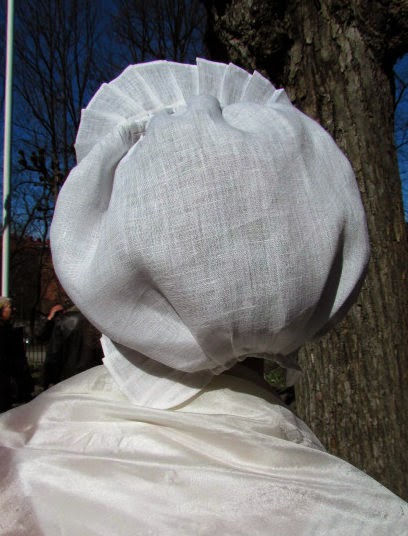 I based my pattern on the shape of this cap on Duran Textiles, but made it smaller. Not small enough as it turned out, though. The band was cut out from what remained of my fabric, it got to be about 80 cm long, and when hemmed, 6 cm wide. Both cap and brim were then hemmed as narrowly as I could, which turned out to be about 3 mm. When I made my 17th century shirt I got the tip to lightly starch the fabric before hemming it and that made the process much easier. 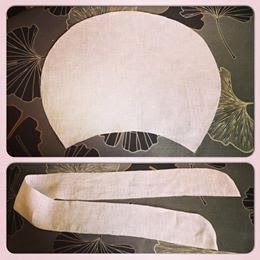 The edge of the crown was gathered down to 36 cm and the brim pleated to the same measurement. Then I arranged it on my ironing board, roughly mimicking the shapr of the crown, you can see the pins holding it down. 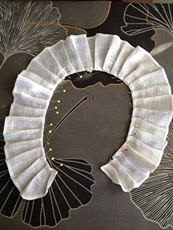 Then I ironed it so all the pleats got flat, removing the pins as I went. After that I starched the brim as heavily as I could. 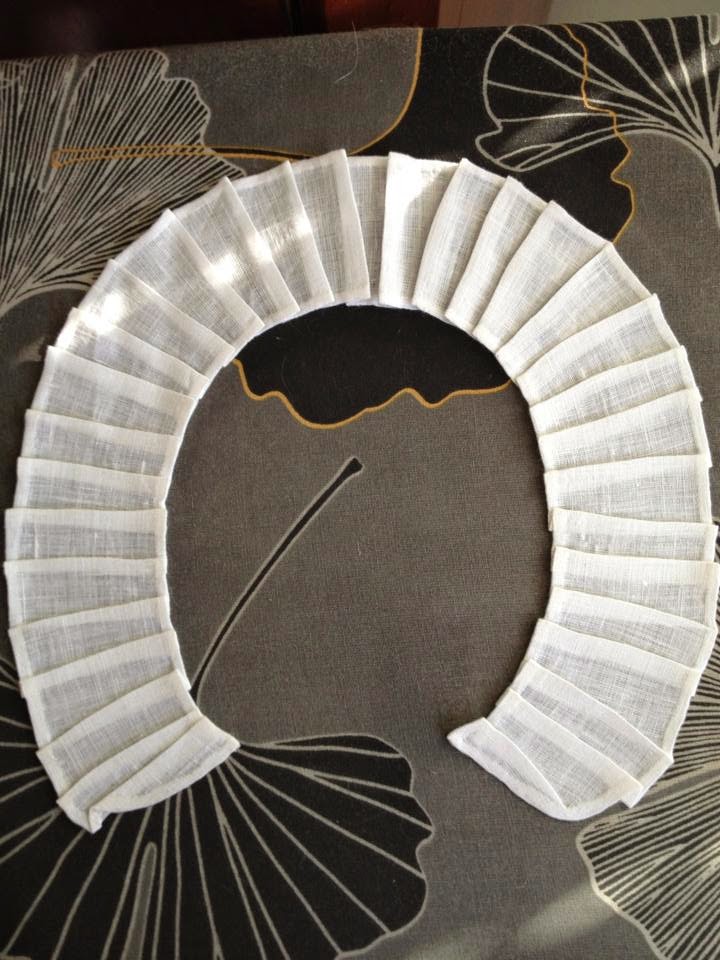 The last moments were to whipstitch crown and brim together and pleat the back. I wore it for the first time last Saturday when I held a lecture on 18th century makeup at Kristinehovs malmgård, an 18th century manor house in Stockholm. I paired it with b´my blue and white striped 1790's gown. The lecture was held in the Animal room, which holds an owl on the clock, a parrot on the lamp, mice on the floor and butterflies and birds on the walls. Here I am pointing at the bird's nest. 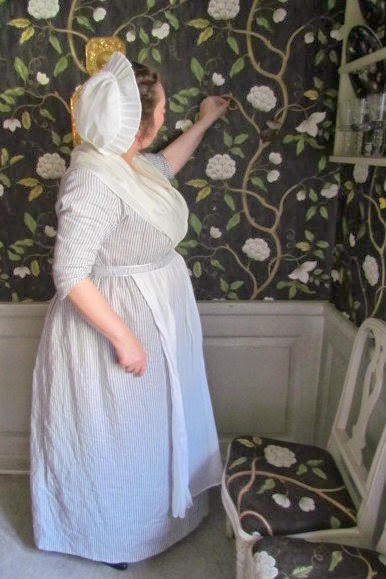 Close up on the bird's nest. The wall paper is a copy of an 18th century one found in the theatre at Drottningholm's castle. 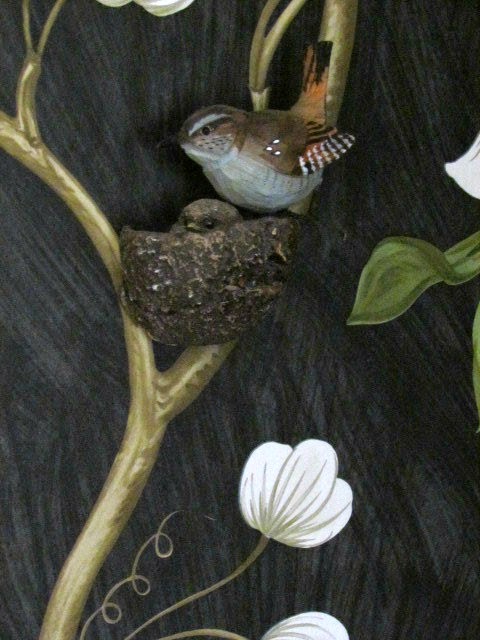 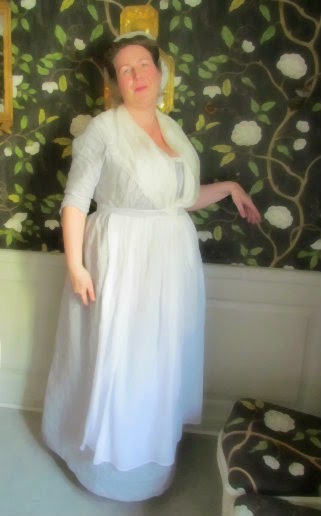 The Challenge: #7 Tops and toes
Fabric: Lightweight linen
Pattern: Self-drafted but heavily influenced by one of the patterns found at Duran Textiles.
Year: Last half of the 18th century.
Notions: White sewing thread in silk, starch.
How historically accurate is it? Pretty accurate. The pattern isn't original, but it is hand-sewn and constructed in a similar manner to extant caps.
Hours to complete: 14
First worn: April 5 when I held a lecture on 18th century makeup.
Total cost: Don't know as I used linen scraps. 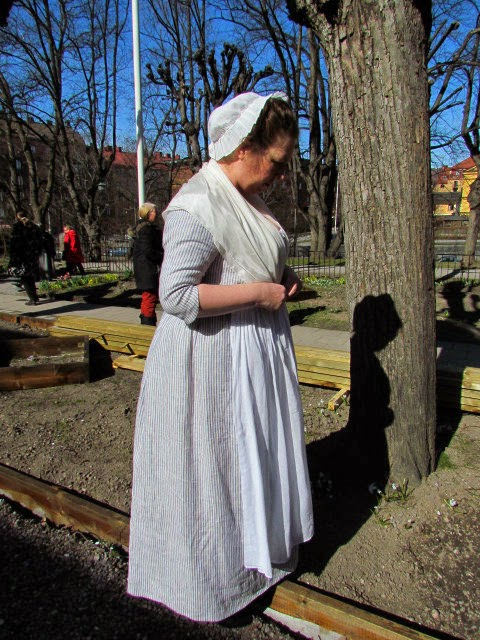 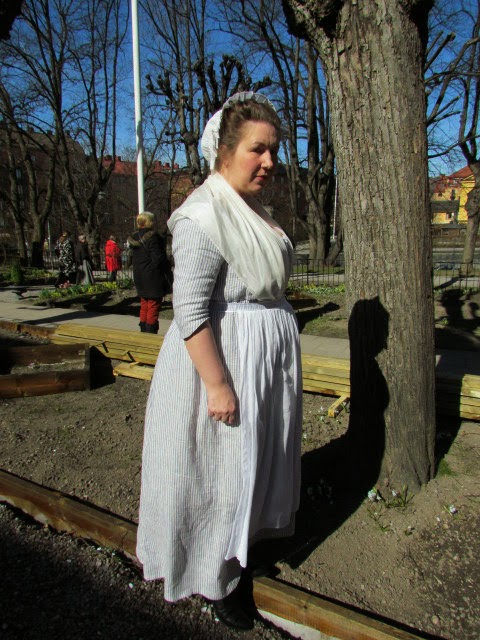 Hello! An award! (Don't worry if you aren't into the awards thing. But I'd love it if you did mention how/why you started blogging)

MrsC: Thank you so much! I did start out smaller and thought it would be way too small... Of well, one can never have enough caps, I guess. :)

Isabella: Thank you! I rarely do awards, but I promise that I will answer your question!

Dear Isis,
The cap is really nice! It's beautifully made, and has the crispness that was so admired. Would call it a real success then, whether or not it came out as intended :}

It will be interesting to see just how much smaller you make the wired cap.

Thank you for all the documentation. Oh, and the animal room is just lovely. Is the reproduction wallpaper after a Chinese design? It would appear to be but it's not too usual to see dark-colored backgrounds on Chinese papers. Wondering if the original paper was a local take on Chinese papers. Whatever it is, it's so handsome and such fun.

I am almost certain that it the original was a wallpaper from China and not a local version, as Drottningholm was one of the more important Royal castles and the theatre was Gustaf III's pet project. There is also a Chinese pavilion in the garden, with original wall papers.

Sweden had had a huge import throigh teh East India Company. :) It may have been made black after specific orders from Sweden, though.