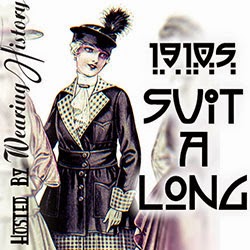 Wearing History is hosting a sew-along for a 1910's suit. It is only just starting, so it's not too late to hop on. Of course, I wasn't to add anything new to my sewing schedule, especially as I have just spent two months being ill and all my sewing has fallen behind. But I also want something from this time period, so I have decided to make a change in plans. There will be posts on Wearing History's blog and there is also a Facebook-group.

The pattern is one of Wearing History's reproduction patterns and can be purchased both as paper pattern as well as an E-pattern. The original is from 1916. There is a possibility to purchase just the jacket or skirt, or both together. 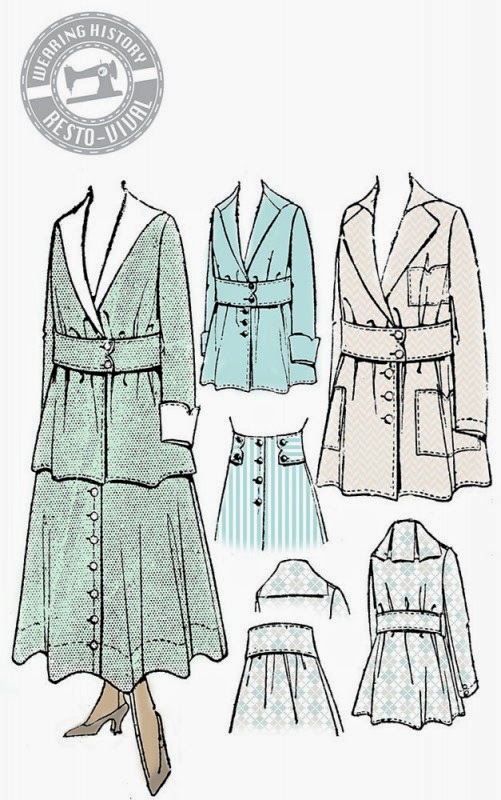 I want to use fabrics I already have in my stash and I know I have enough black wool for both jacket and skirt. However, I want to make the skirt in another colour. At first I thought stripes as that was very popular, but I don't have any striped fabrics at home. I do have some nice blu-grey linen and I think there is enough to make the skirt. I really hope so. I would like to make some details like collar and belt on the jacket in the same linen and I am also thinking of attaching some soutache braids to details and skirt for added visual effect.

Of course I really need a proper corset for the 1910's, but for now that will be on hold. The jacket is loose fitting and I think I can get away with using a generic underbust corset until I have time to make proper underpinnings.
Posted by Isis at 13:36