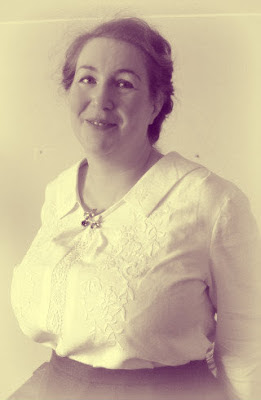 This is probably my oldest project and I'm very pleased to have it out of my way. The blouse with its embroideries were bought as a kit for about 15 years ago! It is a reproduction, so cut and embroidery are based on an actual blouse from the 1910's. I worked on it on and off for a couple of years until the embroideries were done, but for the last ten years, or so, it has been waiting to be sewn together. I thank The Historically Sew Fortnightly project for giving me a nudge to finally finish it. 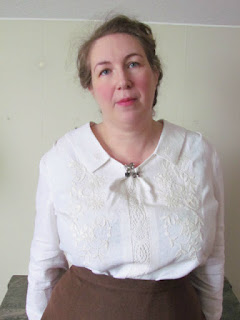 The blouse is in linen and the embroideries in whitework in linen thread. Both back and front have embroideries as well as the collar and the cuffs. The shape is rather simple, though the side seams are curved to give the blouse some shape.

As I started this project such a long time ago I found that the blouse was now a bit too small over the bust. In my stash I found some linen lace that my grandmother had made, so I mounted that on a piece of leftover linen and inserted that at the front. That probably made the blouse a bit more un-correct for the time as that made the blouse so wide that it is now possible to pull it over my head. As I wanted to finish it I decided to leave the buttons out. However, the insert that made the bust part in the right size, also made it too wide above it. 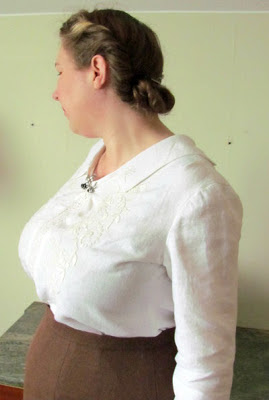 When I was finishing it yesterday I felt at loss on how to cope with that without destroying the embroideries as my mind only came up with darts. For this photo I solved it by fold the surplus and hold it together. Now when I look at the pictures I realise that I can, of course, unpick the neck and cut away some fabric at the centre front before re-attaching it to the lace. Oh well, it is wearable as it is now, so for now I will call it a day. 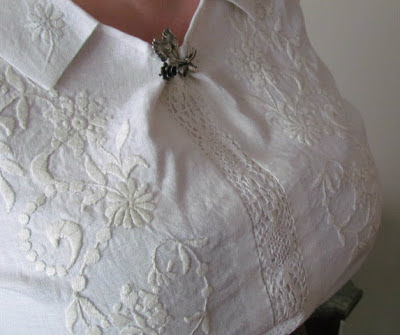 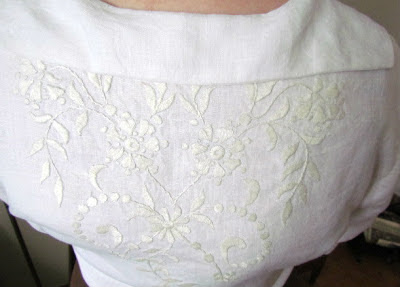 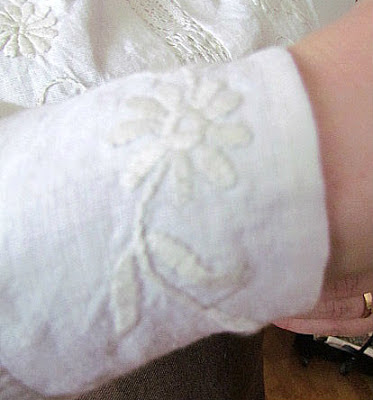 It's so beautiful! Good thing you didn't give up on it after all that time.

I'm always so impressed by people who have the patience for embroidery! Even if it took a long time! It's so lovely!

Woooooooo, now that is some very nice embroidery. Satin stitch is not simple stuff to do. The effect's very nice, and I like the lace solution down the middle.

Methinks the cut feels very teens-ey. All you need is a plain skirt and some killer tall laced boots and wowser, what a Great War outfit.

Although truly thinking of the Great War is always for me a malencholy thing.

Wow ! This is truly AMAZING !

The embroidery is fantastic! White-on-white is such a subtly impressive style, I love it.

Augustinytär: Thank you! I was a bit tempted to do so- and really afraidn that it would be unchangeably too small. Glad it wasn't!

therru: Thank you! It's my alternatibe to knitting. :) Something that is easy to lug around and owrk on in front of the telly.

Natalie: Thank you! I agree, it was not simple and I did some picking and re-doing. :)

Hana - Marmota: Thank you! I must confess to feeling a bit impressed myself before I remember that I actually made it... :)

Is a beautiful and elegant blouse, congratulations :)

Dear Isis, I saw this on the 'we sew retro' site and thought "Oh wow, gorgeous". I hope you appreciate what a beautiful blouse you've constructed. A blind man on a galloping horse could see the patience and talent that has gone into this garment - well done, its beautiful.
Lesley

Charo Palacios: Thank you so much!

Lessles: Thank you! I must confess to look at it and think "Wow!" Even if I did it all myself. :)

I've just been looking at some family photos my mother recently found from the 'teens' and your sepia one looks very period...except you look so much happier than people often did in original old pictures and you should- as your blouse is really beautiful!!

So pretty! I love the symmetry of the embroidery and white-on-white is one of my favorite looks. Gorgeous!

VeraVenus: Thank you, that makes me happy to hear. But you are right, they usually did look a lot graver. :)

Rowenna: Thank you so much! I'm very pleased with it. :)