Madame Berg brought to my attention that The Royal Armory, Skokloster castle and the Halwyl palace now has a database online on their collections, to be found here. . In Swedish only so far, though. The armory, for example, has a very large, perhaps the largest collection of 17th century men’s clothes in the world. If you want to look for clothes, then put in “Dräkt” after “Klassification” and the year you want to search for in the boxes after “År från” and “År till”. Choose “ja” on “Föremål med bild” to ensure that you only get the items with a picture.

I found a lot of goodies during a quick search. As I have a special interest for theater and masquerade costumes, here are a few I found:

Theatre costume “Watteau” from the end of the 17th century in taffeta and linen. 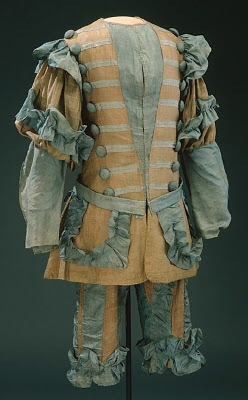 Harlequin-costume in linen and silk for a masked ball, probably worn by Queen Ulrika Eleonora, 1656-1693. 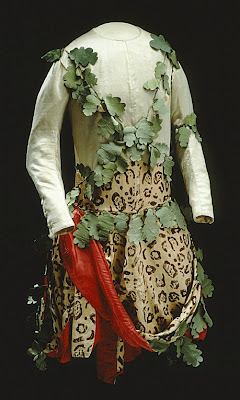 oh wow! What a wonderful find!

These are quite fascinating!

Yes, it's really about time!

After enjoying this blog for quite some time, I am really pleased to be able to give you an award on my blog. Thank you for sharing such great finds as this, and projects like the court gown.