It’s not quite true that I haven’t been sewing this year, I have worked on a couple of small cap and embroidery projects. But that is just about what my energy level has been up to. I haven’t blogged much either, but hopefully both sewing and blogging will work better for me now. So I thought you would be interested in seeing some of Pehr Hilleström’s (1732-1816) painting of working women I have seen this summer. Most were seen at an exhibition at Sven-Harry’s art museum and two at Julitta manor house. The picture quality is reflected by the fact that most were taken with my mobile phone.
Some of you may remember that one of my costuming pet peeves is when a garment is dismissed just because it wasn’t worn at one particular place. The costume world is, for good reasons, turned toward England, France and North America, but there are a number of regional clothing differences and the working woman’s clothes often reflected that. For example, the dreaded sleeveless bodice and shift combo, was actually a perfectly acceptable for a peasant woman in Sweden during the 18th century. And coloured caps were also worn, something I was once told didn’t exist during the 1700s. This laundress is wearing a bodice that seems unboned and a simple shift. Her blue cap is what in Sweden is known as a “bindmössa”. It’s a cap made of a coloured, often expensive fabric and in the 18th century it could cover the whole hair or just be placed on the back of the head. It often was (and is) stiffened. It’s still an important feature in many Swedish traditional costume. Originally this cap was worn over a white linen cap, but in the 18th century the cap was worn on it’s own. It could, however, be worn with a “stycke” (meaning piece) made of fine linen or lace and attached to the cap in a way which made it look like a separate cap was worn underneath. A ribbon bow was often attached to the back of the cap. 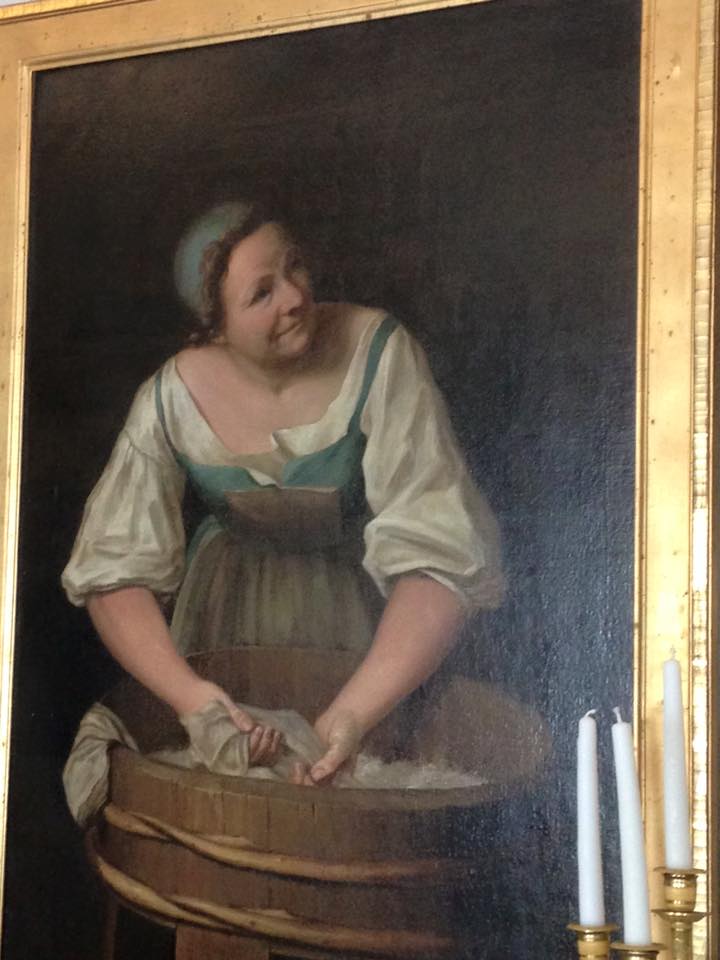 A "bindmössa" could be worn by the middle classes as well. Bellamn mentions the rather wealthy Madame Bergström who is wearing a cap made of  green silk moiré and  decorated with silver lace. Underneath the cap she is wearing a "stycke" On the picture below you can't see much of the actual cap, but you can see the "stycke" 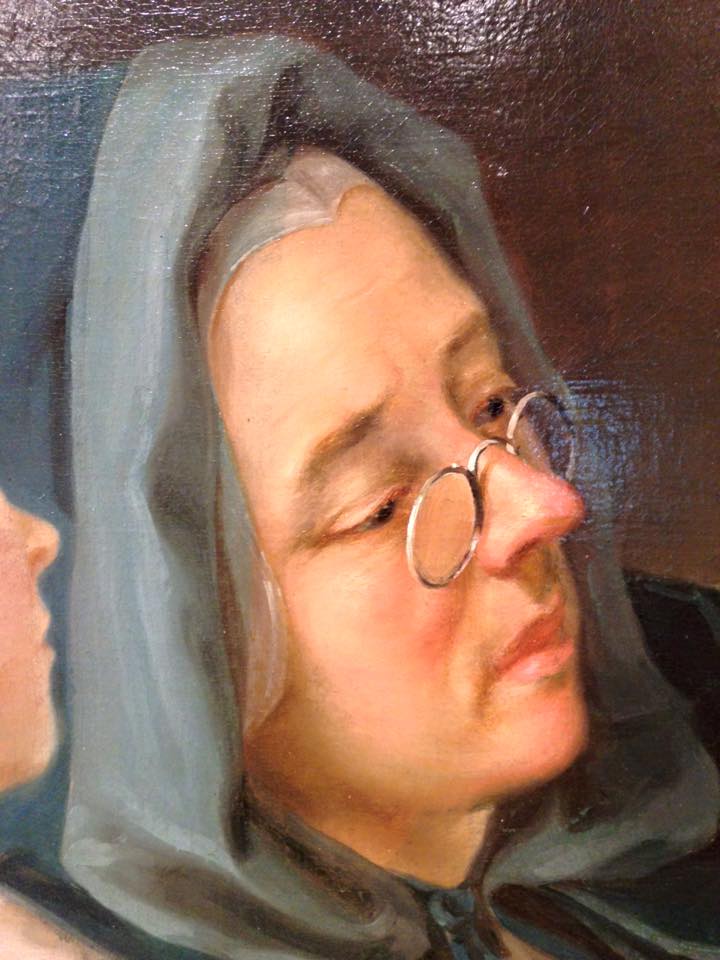 This woman has very nice cuffs, I Think. She's not wearnig a cap, but a "klut", a neckerchief folded into a triangle and wrapped around the head. 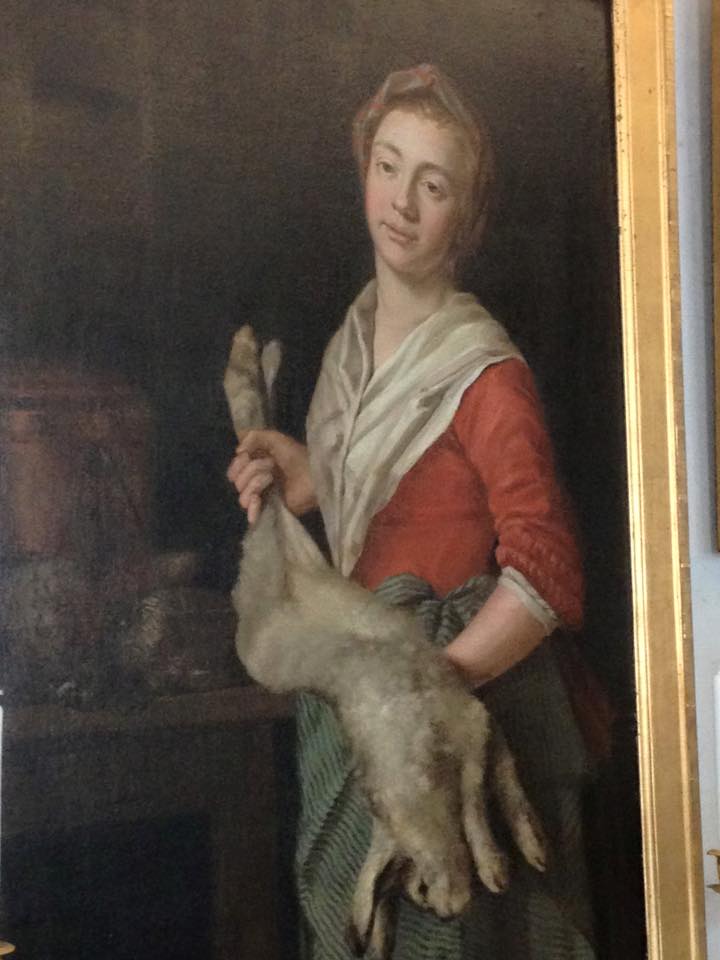 As is this woman


Another bodice, this one clearly unboned. There are several extant ones and they range from being completely unboned, having bones in strategic placed up to half-boned.
Of course white caps were worn as well 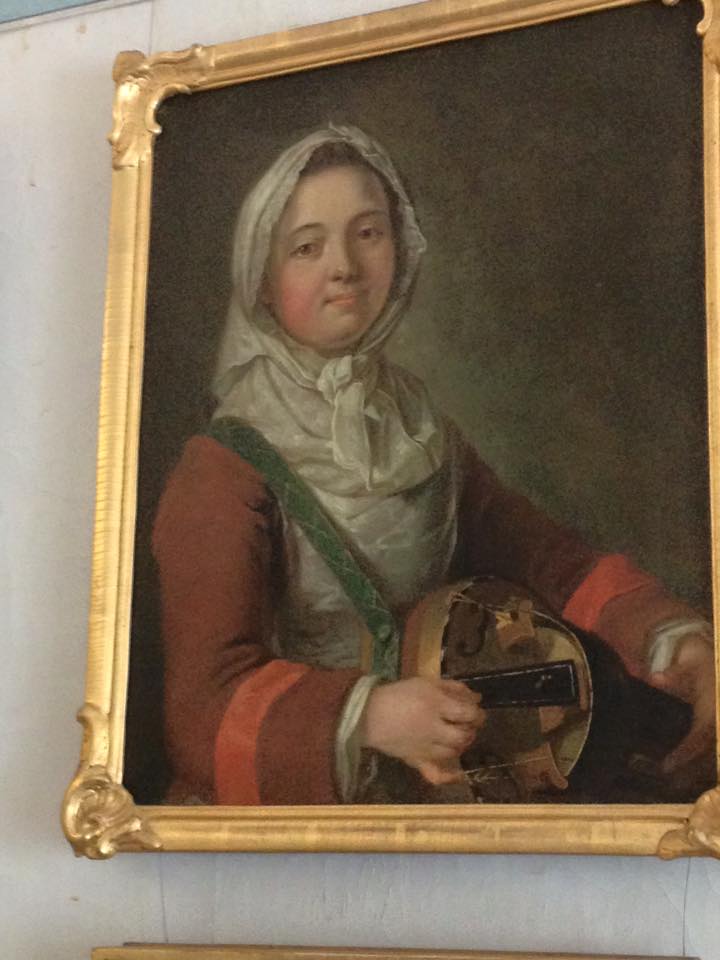 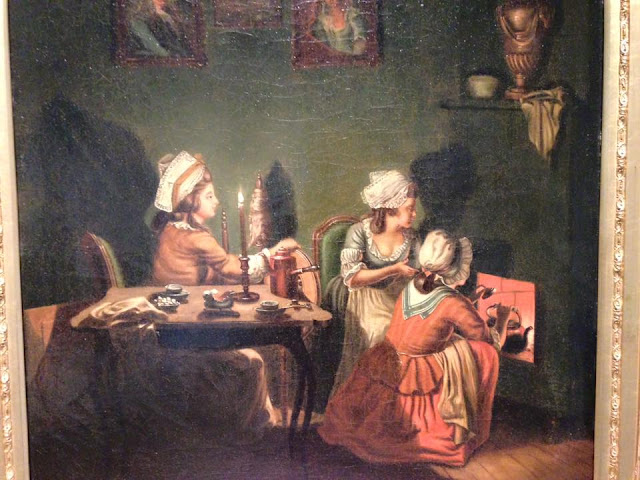 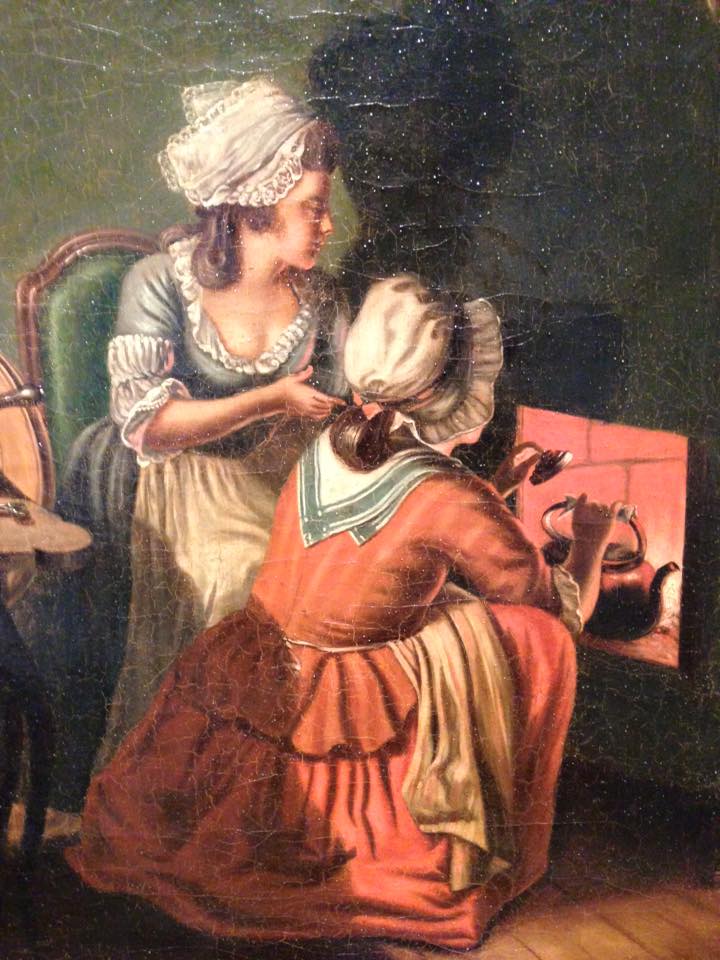 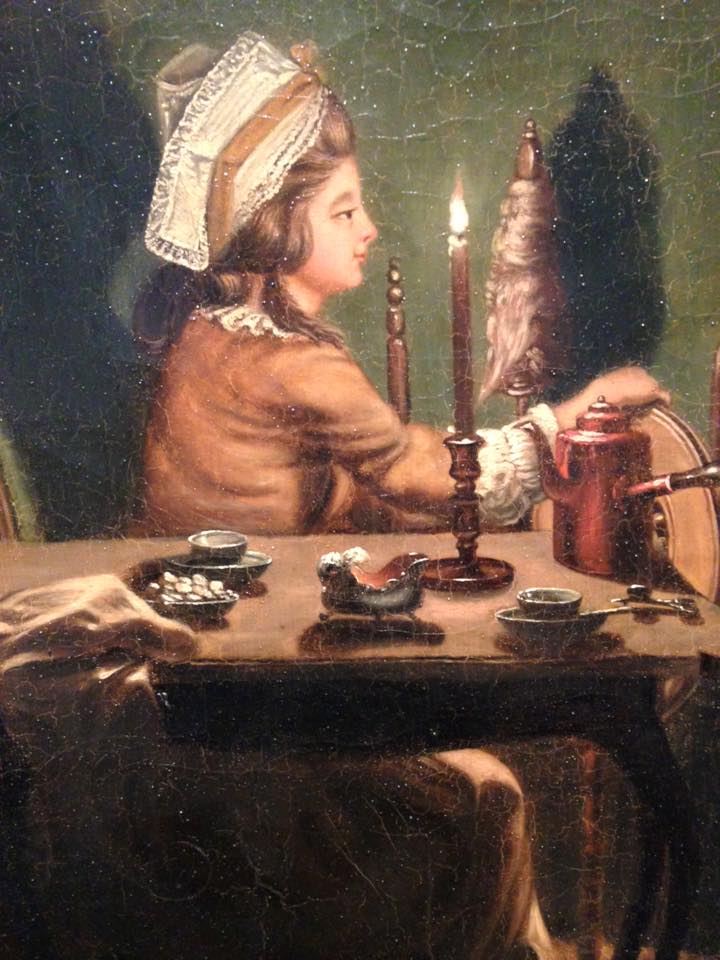 These close-ups are from a large painting showing a party outside Svartsjö castle, showing a variety of clothes. Lots of stripes! 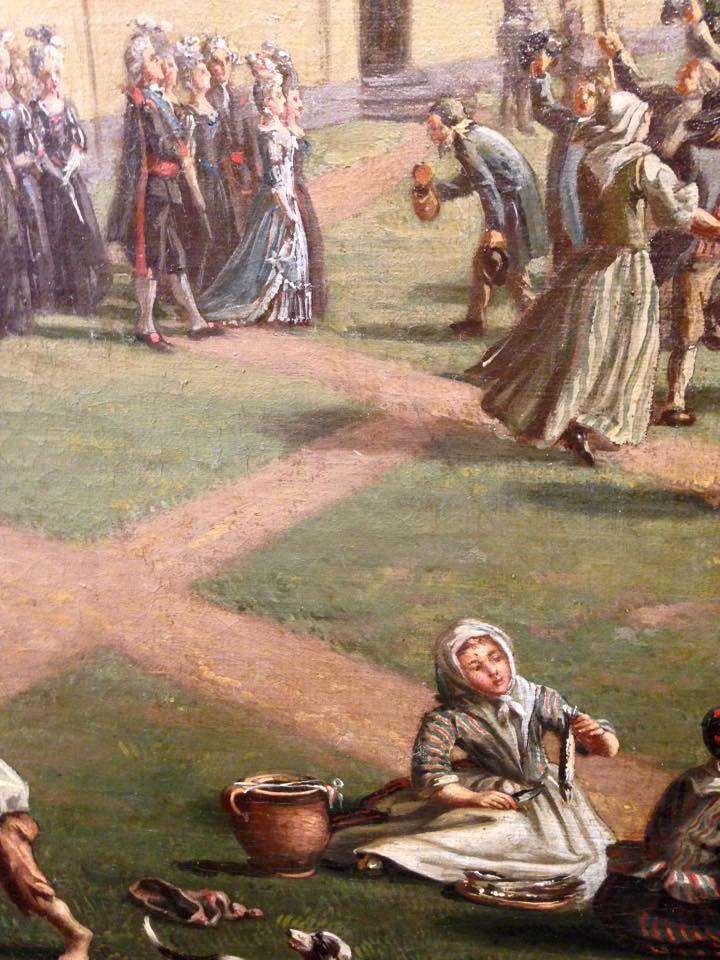 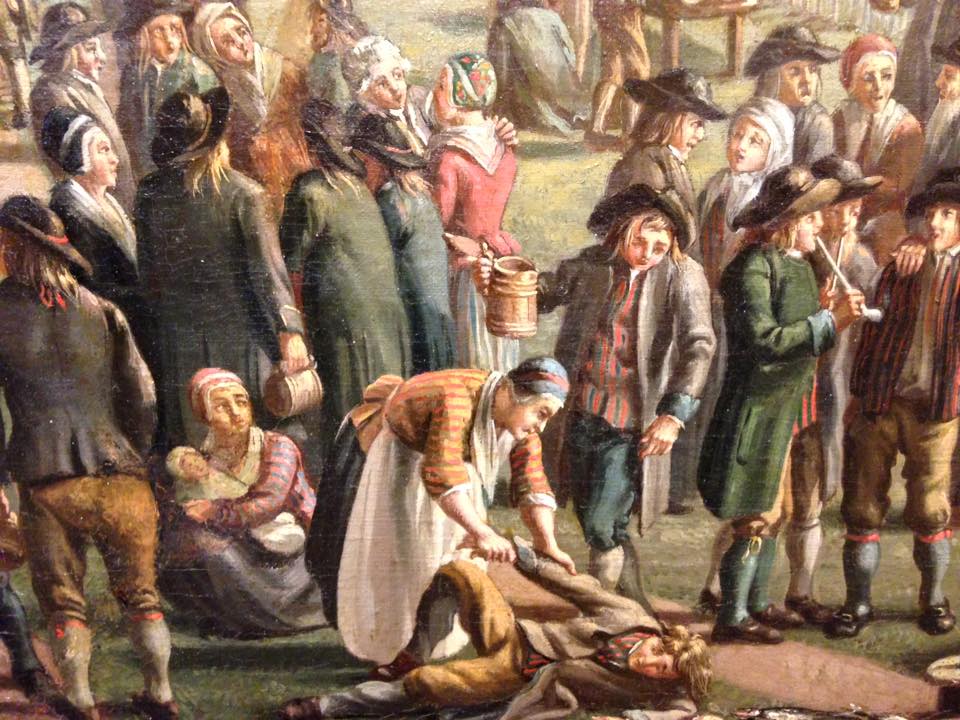 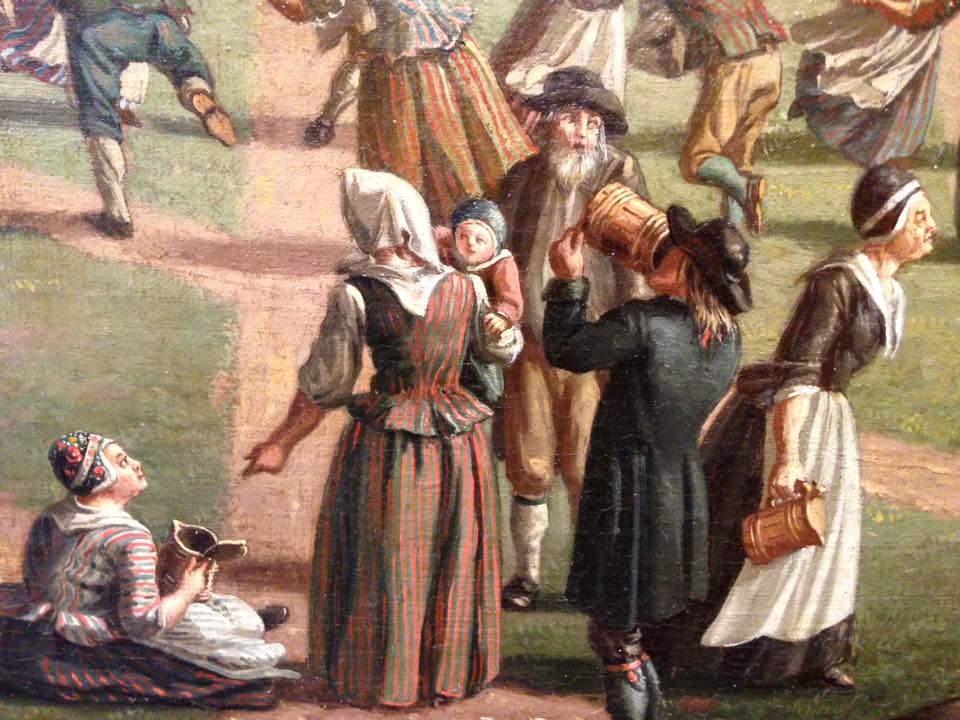 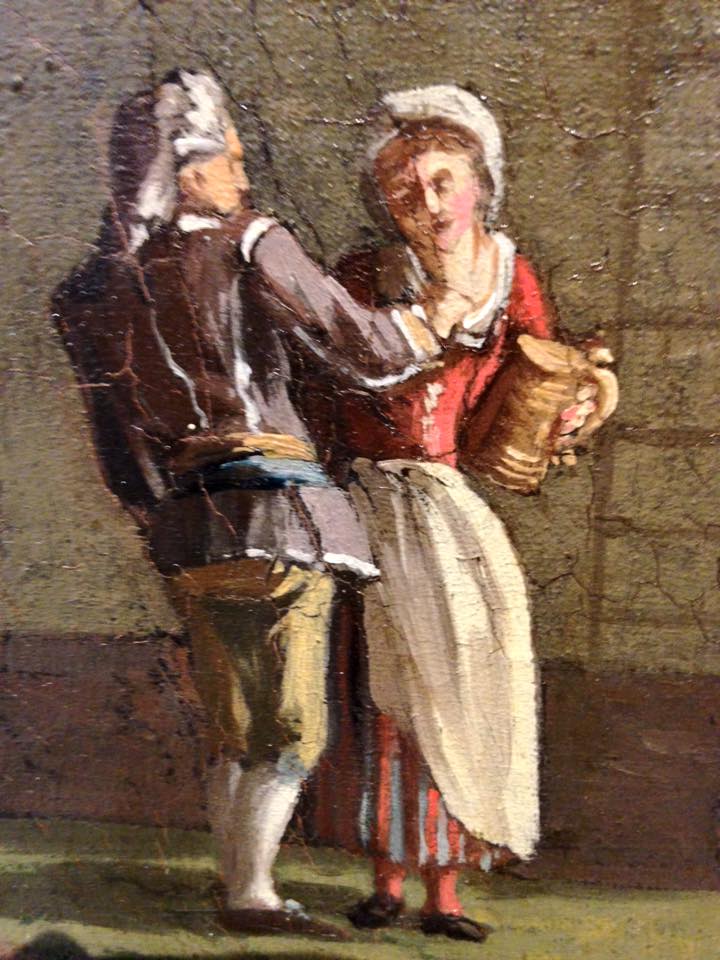 Dear Isis,
Good research! The dots are beginning to connect in a more coherent fashion than heretofore.

Have you seen The Couture Courtesan's recent post titled "An elizabethan-early jacobean petticoat: not your mama's corset"? It's at http://reine-de-coudre.livejournal.com/215552.html. Gee, it looks awfully familiar, eh?

I've long wondered about the Swedish, Dutch, and German settlements in early America, too. Would not be surprised if we didn't see similar fashions of dressing hang on into the 18th century, after they'd faded away in much of the rest of the population of the American colonies. It might well depend on the individual community and its relations with the surrounding areas.

I am in the process of altering my great grandmother's folk dress to fit me, and while doing it, I have become very interested in the clothing of common people and which similarities and differences there are from fashion clothing. As well as regional differences.
When people want to make clothing from a certain area and age, they often end up with the clothing of rich people from important areas. Because that is what was portrayed, and that is what has been perserved.
But that doesn't reflect the width of the clothing worn.

So I have chosen that my next projects will be practical clothing of working people, namely a regency shortwaist and petticoat and a 1890s walking shirt and shirtwaist.
And I try to use sources from Denmark (or therearound) rather than the mass of ones from the Enlishspeaking countries, that one can easily find online.

By the way, my folk dress will be on my blog in a few days, if you are interested: http://www.sagaifarver.dk