Hand sewing and the 18th century

What a nice response I got on my post on hand sewing! Thank you!


If hand sewing is often thought as hard work or taking too long, I also think that there is an air of superiority and elitism over it that can probably feel a bit daunting to someone who has never tried it. I would really love to see that tought go away!  I do think that hand sewing gives you a better feel for the garment you sew, especially if you sew historical clothes, but it doesn’t, automatically, makes it better than one made with the help of a machine. Sewing skill is one thing, then there is the matter of choosing the right pattern, fabric and colours and knowledge about the fashion you want to re-create. I have heard, though thankfully only once, someone with a badly cut gown worn without the proper underpinnings, trying to trump a beautifully executed one with the right silhouette and colours with a “Well, mine is totally hand sewn”.


I really, really don’t like “I am better than thou”-sentiments. And a badly made garment is still badly made, even if it is sewn by hand.

﻿ With that said, I still think hand sewing can really alter the way you perceive the garment you sew and I would like to talk a little how it  has helped me understand the fashion of the 18th century better.

An 18th century bodice usually has an outer layer and a lining, but no interlining or extra stiffening like men’s wear, though boning is frequently found. That does change a bit toward the end of the century when masculine garments like the redingote find its way into the female wardrobe and stays may have extra layers for stiffening, but those are exceptions. The lining may mimic the shell fabric in cut, but sometimes the lining forms a close-fitting foundation on which the outer layer are pleated. The Robe Française is an excellent example on that. But for the sake of simplicity, I will talk about a bodice where lining and shell fabric looks the same. 18th century clothes are also cut very economically. Sewing allowances are as small as possible and when there are not, the excess fabric are not cut away, but are left, so a later un-picking would result in larger pieces. A good example is petticoats. To look right, a petticoat worn over hoops need to be longer at the sides than they are CF and CB. You can cut the fabric, but 18th century petticoats often have the excess fabric just folded back to give the needed curve.


This yellow jacket is beautiful, isn’t it?. Looking at it like this it is easy to think that all the seams are made up the same, but in fact they are all made differently! Some treats the lining and shell fabric as one layer, some don’t. Some are sewn from the wrong side, some from the right, each chosen to fit that particular seam and its purpose.


When I first started out making 18th century clothes I usually made up lining and shell fabric as two separate pieces. I sewed the pattern pieces together with putting the right seams together, sewing a seam, and pressing it apart. Then when they were finished, they are put together, right side to right side,  and finished. Not very historically correct, but quite fast.


A couple of years ago I decided to make a gown after a pattern taken from this extant robe.


It has a fitted back and a gathered front and was made in the 1790’s. The fabric, however, dates back to the 1770’s and it is very clear that is re-made from an old gown, probably a Robe Française. There is a lot of piercing going on, especially in the trail. The bodice look like it has a very narrow back, but in reality it has a center back seam and then the narrow fabric piece is sewn on top of it. An illusion, in other words. The armscye looks larger than it is as well. It is normally sized, but the sleeves are sewn well into the back to enforce the look of a narrow back. If unpicked, the back would provide much more fabric than it looks like from the outside.


As I wanted to sew my gown as closely as possible to the original, I had, for the first time, to really look into the way it was made and I found that there was no way around it, I had to do a lot of hand sewing to pull it off. The back piece, for example, is not functional for the gown’s construction and you have no choice but to sew it from the right side. By hand.


The sleeves, as they aren’t sewn into the armscye at the back, also had to be sewn in by hand. And they were so much easier to do that way! The lower half, that does match the armscye, is sewn like you usually do, right sides together, but then then the sewing allowances are folded under and the sleeve is finished from the right side.


The way the sleeves and its lining was put together was also fun and for me unusual. The technique can be dated, at the very least, to early 17th century and it remained used during the 19th century.
This is a two-piece sleeve. If not, the first step is not needed. And that is to sew one of the sleeve seams. As well as the same seam on the sleeve lining.


Then you put sleeve and lining on top of each other, pin (baste) and sew that seam as one. 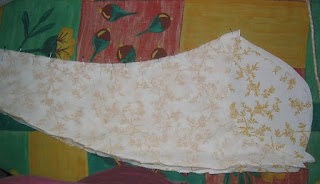 Please note that you should put right pattern pieces together. I didn't. I put the sleeve together with the identical lining, when it should have been the opposite. It should NOT look like this: 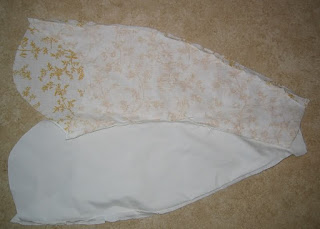 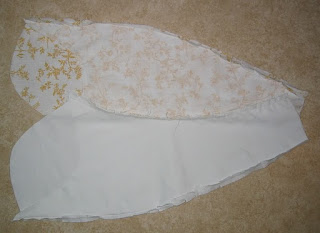 Hmm, I realise that it's hard to see the difference as the lining is a bit sheer, but trust me- on the second picture the pieces mirrors each other.

Press seams and then start to pull the sleeve the right way. Don't bother with the lining at all, concentrate on the sleeve itself. Because when it's turned right, the lining is neatly right inside as well. You probably need to fiddle a little to make it all wrinkle-free, but I thought it really easy. 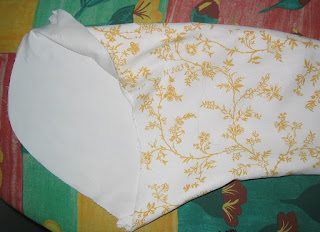 Check out Katherine's post on the same method.
As I have said before, I do use my machine, mainly for long, boring seams, but I find that I sew more and more by hand as the years go by. And I can heartily recommend anyone to give it a try! I had in mind of making a post about the different stitches, but I think there already are plenty of good instructions online. I have included several links, even if the information overlaps a lot. I have done that in the hope that everyone can find an explanation that suits them.


As for the bibliography I must once again lament the fact that costume books rarely seem to be translated into English. Both Kvinnligt mode and Skräddaren, sömmerskan och modet are treasures when it comes to construction analyses. The latter also have schematic illustrations on different seams and when they are used. Both contains pattern of extant clothes, especially Kvinnligt mode. Skräddaren, sömmerskan och modet have fewer patterns and those are mostly the same as the first one, but with a more in depth discussion on the sewing techniques. There is also a pattern for a bed jacket dated to the 1790’s-1810’s which I would love to make!

I handsew becuase I couldn't owrk out how to use a sewing machine until I was 37, and I'd been making costume for over 20 years by then, so was a little set in my ways!

opusanglicanum: A good reason, I think. :) I wasn't taught any hand sewing until I was over 20, so I had to re-learn a lot.