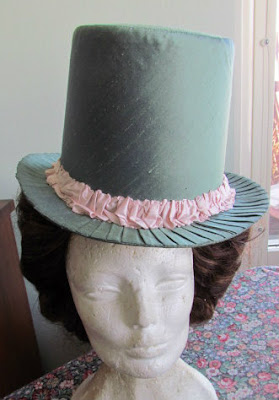 I have actually finished something! I had planned to finish it on Monday so it could fit in into Historically Sew Forthly, but I didn’t quite made it and then it took a few days before I had time to take pictures. It is a hat, as you can see. The base is a cheap masquerade felt top hat. I removed the plastic bands and steamed the brim to get it a bit flatter. It is covered with green dupion with a pleated brim. The sides of the crown are cut on the bias for the stretch factor. The crown is wider at the base and the band is stretched there and eased on the top. For visual effect I made the seam on the crown diagonal and put it on one side instead of mid-back. The decoration is an irregularly gathered strip of pink taffeta. 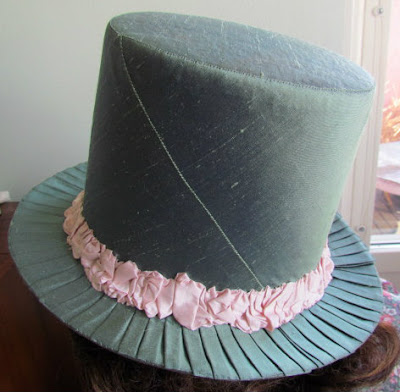 The hat is made to match a pink jacket and petticoat with green trim. It has been on the “almost” finished stage for way too many years, but I have decided to get it ready for the big party in May. It only needs a stomacher… The piemontaise will be put on hold, though. I realize that I won’t have time to make it as I want it, so it will be the pink ensemble for the day and the stays with sleeves for the evening. 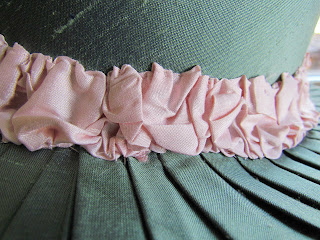 The inspiration for the hat comes, in general, for the kind of top hats that can be seen from the late 1780’s onward:

Beautiful! The color combination is one of my favorites. And the best part is that it looks fabulous plain or you can add a bow or plume to match your mood! :)

It came out beautifully!

thepragmaticostumer: Thank you! I plan to make a few bows in the pink taffeta for some future sprucing up. :)

Love! Can't wait to see it perched on top of a huge wig!

Kendra: Yes, I have a growing suspicion that I will need a bigger wig... :)