New stays in the making

As I mentioned in my last post I’m currently involved in a calendar project for The Society of Gustafs Skål. So far my involvement has been with giving a helping hand with the makeup, but J and I are also engaged to be in a picture, namely this one by Jean-Honoré Fragonard from the 1760’s: 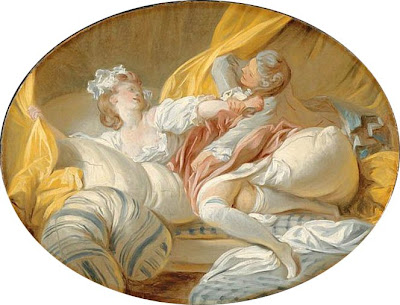 This version can be found at Nationalmuseum in Sweden and is called “Den vackra tjänsteflickan” (The beautiful servant girl). One thing I have to do is figuring out what woman is wearing. She is definitely dressed in a chemise and stocking, but either she wear a petticoat that matches the curtains, or perhaps it is the curtain all the way. I suspect that it doesn’t matter much what it is as long as we can make it look similar to the painting. Her chemise does look rather fitted and in another version, more darkly called The Useless Resistance, it looks more like she is wearing a pair of brown stays: 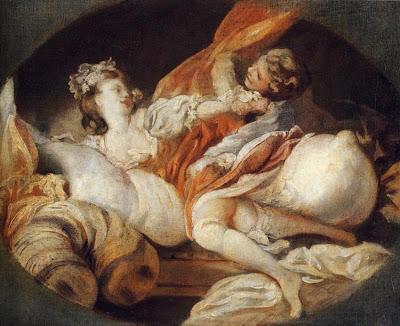 As I feel a bit uncomfortable wallowing around unsupported in a chemise I have decided that I will wear stays. And as I don’t have any brown ones, a new pair of stays are in the making. I happen to like making stays and it’s the only item of clothing that I can make any claims at being able to make quickly. I have a true and tested basic pattern that I tweak to fit the requirements of my hosen style. This pair will not be my usual front- and back laced, but only back-laced. I found some linen in a nice reddish brown colour that seems similar enough to the picture. 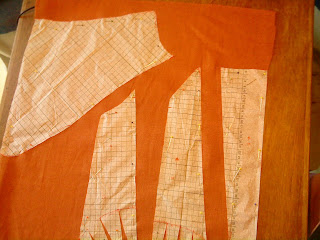 I used chamois leather to bind my blue stays and really enjoyed working with it, so I will bind these stays with it too and match it with boning channels in yellow. But how to bone them? Easiest would be to make something similar to these:


I have done that before, and it is a bit boring. I do need them to be fully boned in the front to give me the right amount of support. These are still quite heavily boned, but have a bit more interesting front with the crossed stitching lined and the laced slit down the front.


There are quite a few stays with a slit like that, and I don’t think it would be too difficult to make.


I want shoulder straps, but I would like them to be fairly narrow, so I think I will make them similar to these.


I also like the look of a broader pinked border underneath the arms, so I might to that too.

I don’t claim historical correctness when I stitch my stays together. I usually sew them together and then do the boning channels, all on my machine. Here they are after the stitched together but before the sewing channels-stage.


And here I ran into difficulties. My sturdy 1960’s machine have no troubles sewing through thick layers of linen and it has no problems sewing with a heavier thread either. I don’t, however, have my machine at hand at the moment. Right now I’m living in our summer house as they are re-doing the plumbing at home and the machine there is a plastic Bernette who gets into a temper if I demand anything strenuous of it. The pan was that we were to move back tomorrow, but today we found out that the plumbing won’t be done until Wednesday, at the earliest. Very, very annoying and inconvenient, but even more so, if sets my stay sewing back several days and I’m unsure if I will be able to finish them in time. I could always wear my blue stays, even if the colour is wrong- we are, after all, not making exact copies of the paintings. So now I’m thinking if I should make a go in hand-sewing the boning channels. I have some time to kill this weekend, but I have no idea how long it will take to make them by hand. It’s over 10 years ago that I hand-stitched a pair of stays and I don’t remember how long it took.