Reader, I married him

The quote is from Jane Eyre, one of my favourite books, and it is very fitting for today’s post. In case you have noticed my absence, I can now tell you that it was because I got married on Saturday. 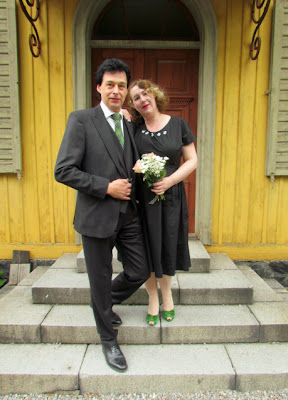 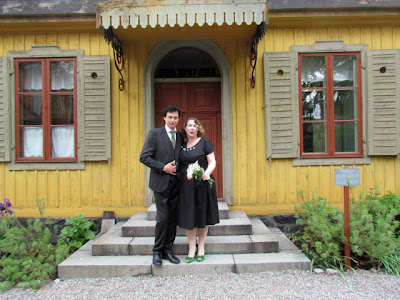 J and I have been planning it for a while, though we kept it a secret. As both of us have been married before we decided early on that we were just going to have a civil ceremony and not have a big party, just invite our closest family for dinner. A month ago J noticed that Skansen was going to have drop-in weddings on June 9 and wouldn’t I just love getting married on Skansen? Yes, I would. 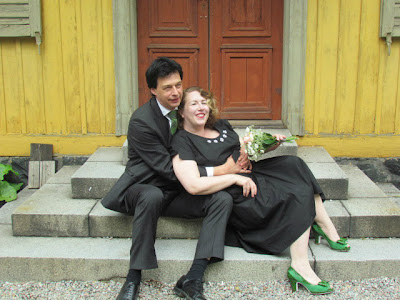 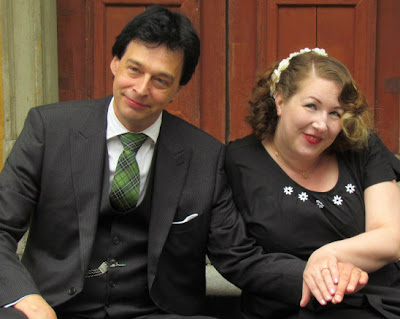 Skansen, for those not familiar with it, is an out of doors museum in Stockholm. Partly it’s an exhibition of houses from all over Sweden, ranging from the 16th to the mid-20th century. The actual real houses that has been moved from their original place. It is also a zoo for Scandinavian animals like bear, moose and lynx. It’s very popular and a lot of people get married in Seglora church. 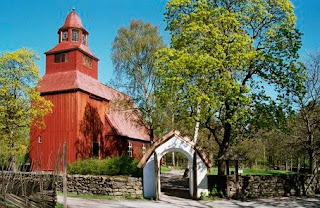 We didn’t, though, as I said we had a civil ceremony that took place more or less out of doors. My sister, her husband and my son went with us. As my sister doesn’t live in Stockholm we did tell them about our plans and asked them to come along as witnesses to make sure that they would come. My son was told in the morning when I woke him up and being 13 his only comment was. “Will I have to come on a wedding? How embarrassing!! Kisses are so gross, you know. 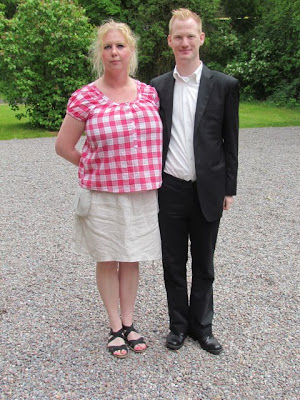 It rained when we started out, but it stopped in good time before the ceremony. We had a cup of coffee before out turn and after we went home again to prepare for dinner. We managed to get all of our families to come, apart from one of J’s nieces who lives in Australia, so with parents, sisters, brothers, step-daughter, nieces and significant theirs we were seventeen. J’s sister had managed to suss it all out and wasn’t surprised, but my family was. Everyone seemed very happy for us, though.

And we are very happy. 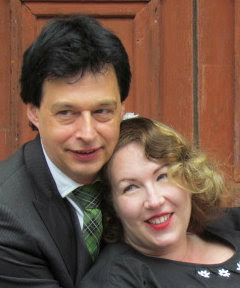 I did think of making my own dress, but in the end I wore a dress from Heyday. The shoes are from Miss L Fire and the green is very much on purpose. My grandmother got married in a green dress and so did my Mum, so my shoes are my humble tribute to them. And they match J’s tie too. The stockings don’t show up much, but they are the same stockings my Mum wore at my parents’ wedding in 1969. They are in off-white net with small dots- very cute. The flowers are two combs with white roses from Belle Blossoms. 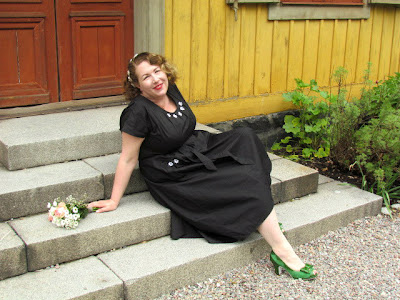 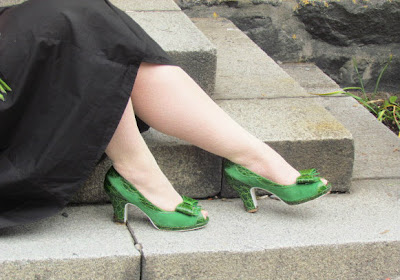 It was a very low-key wedding, but it was just as we planned it and we couldn’t have been happier with how things turned up. 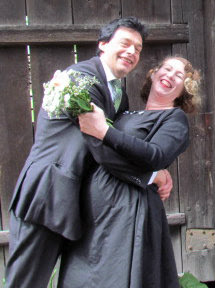 Oh congratulations :-D hearing such news has certainly perked up the dreary, rainy afternoon I’m having here! Your wedding sounds quite idyllic- I’m personally not a fan of over the top weddings and would much rather be part of one like yours!
Your outfit is darling and I’m extremely envious of your shoes (I’ve had my eye on those!) and such a nice reason for wearing them too!
Much Happiness
Tupney x

Yay, hurrah and a thousand congratulations!

You look so happy and handsome and chose the prettiest spot one could think of for your wedding!

Well, congratulations! What a nifty, happy-go-lucky day for you both. A bonus: the pictures are so infectiously happy that years from now, when you glance at them, they should still bring a pleased thrill to the breath and a happy jump to the heart.

The post title made me smile, and then I saw it was for real and the smile became ever larger and is still there.

Aw, this is fantastic, congratulations to you both - you look absolutely lovely. x

Aww, you sneaky lady, keeping it a secret! Huge congratulations to you both!!!! The happiest wishes for your married life together.

How lovely! Congratulations to you both xo

Congratulations! I wish you many years of happiness together!

Many good wishes for a lifetime of happiness together!

Congratulations! And my first thought in the first pic that showed them was..."Best wedding shoes ever!"

Best wishes for a long and happy life together.
Val

Congratulations! I love that you included nods towards some family wedding traditions, very sweet. You look lovely!

Best wishes! And your shoes are absolutely beautiful!!

Thank you, all of you, for your sweet words! You are all so nice!

Oh Isis! I don't know how I missed this. This is wonderful and congratulations! You look absolutely fabulous (and he's so handsome!)Best wishes for a joyous life together!