Informal jackets and waistcoats of the early 17th century

No doubt some kind of informal wear has been around for a very long time, but as people opted to be portrayed in their finest clothes, they are seldom seen until around 1600. Then the English ladies started a trend to be shown in their more relaxed clothes, a jacket or waistcoat, with or without a matching petticoat. The clothes weren’t exactly simple, bot portraits and extant examples show lavish embroideries, silk, silverwork and spangles, but comparing to the formal fashion, these clothes were much simpler. They could be worn on their own, or with a loose gown over, paired with what kind of cuffs and collars that was fashionable.﻿

They are abundant in portraits the first two decades of the 17th century, and then their popularity seem to have waned in the 1630's. Perhaps because the more formal fashion became simpler, the waistcoats from the 1620’s are cut in a way that points toward the jacket-like bodices of the 1630’s. The waistcoats could be either form-fitting or loose, the latter probably maternal wear. The embroidered linen jackets, either monochromes or in colour, seems to have been an English fashion, but there are several knitted waistcoats preserved as well, and they have also been found in Scandinavia. Given the climate in Sweden I think I would prefer knitted silk to linen, so perhaps that is no surprise
I wish that the portrait of Lady Elizabth Howard was larger, but her jacket and petticoat looks very much like the extant example above.

Lady Anne Porter dressed in a similar way.
Unfortunately there are no colour photos of this pink silk jacket.
The following two portraits may not depict embroidred clothes, but patterned fabric, but then they also portrays the transitional fashion of the 1620's with a waist that is rising from its natural place and a more relaxed fashion in general.

This coif has the same mebroidery as the jacket above. 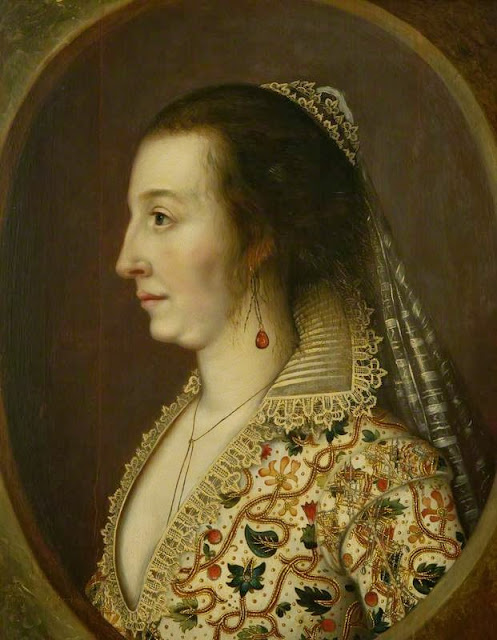 The Countess of Shirley by William Larkin
Undated, but the hairstyle suggest 1620 or thereabout.

Another knitted silk jacket.
Posted by Isis at 14:17

Thank you for the article :-)
You know, you don't really help me to convince myself that I don't need a linen jacket with black embroidery and that I already have enough to work on ;-)

Hi, I feel with you Fiorina, especially, because my Boyfriend just told me, how pretty that Waistcoat an Skirt look.

There are very good colour-pictures of the pink taffeta waistcoat in the "Womens' Seventeenth Dress Patterns" Book.

Hellebore: There are very nice pics in the book, so it is a pity V&A only have black and white ones!