So, here I was, happily sewing the boning channels in the foundation when I idly glance at the pattern and realize that I have assumed something of the pattern that is completely wrong. As you can see on my pattern, I have placed the lacing panel at the front. 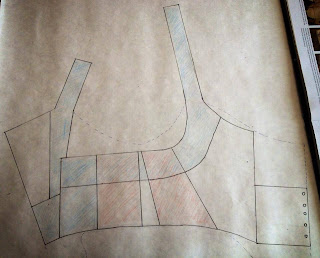 In reality, which you can clearly see both on the pattern and the X-ray, the lacing panel is actually placed on top of the front/side piece. 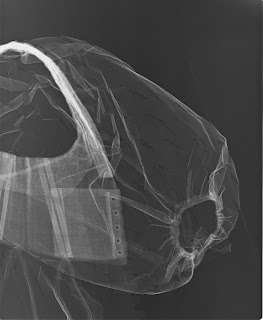 I have stared and stared at this pattern and haven’t even noticed it until now. However, in reality it doesn’t matter much for my fit. I still need to make the front a little different to ensure a good fit.


The fit after the foundation has been boned is quite good, I’m thankful to say. Here it is machine basted together, but will be ripped apart and be separately covered with taffeta before assembled permanently. The front doesn’t lace completely shut, which is according to plan. Experience has told me that it will be laced shut after a while. 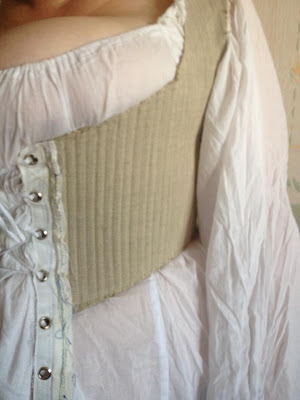 The back, however, is still, even if I made it significantly narrower, still a bit wide. I will let it be, though. With the shell fabric on top and then a collar, I doubt that it will be noticeable. 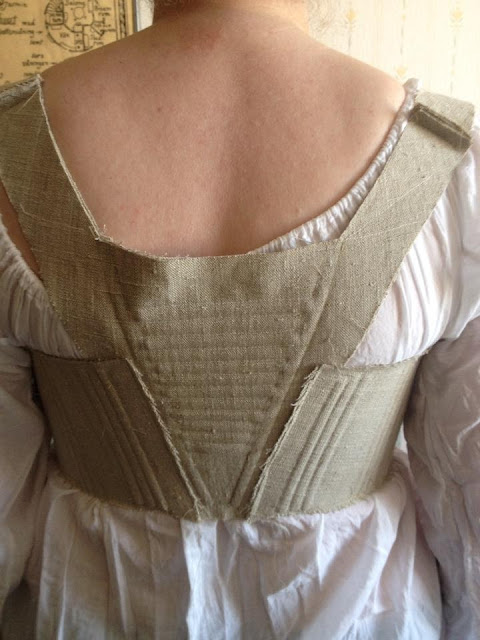 There is also a lot of cleavage. It is kind of hard of me to not have, being amply endowed, but that will be better too when I can lace it shut. The taffeta stomacher will be boned too and give some additional support. 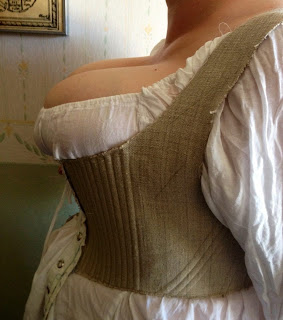 The taffeta shell fabric. Front and back are longer than the foundation and there are also six gussets to give additional hip width. Fabric is always hard to get right on photos. The taffeta is actually two toned in purple and pink. 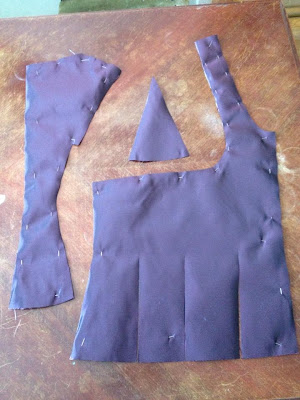 It looks a little better here, but a bit too yellow. 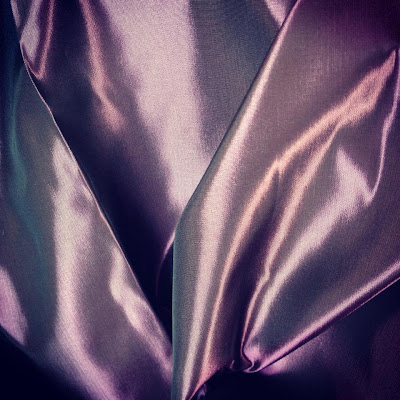 Am enjoying seeing this come together. The cut is really interesting. I wonder how comfortable it will be to wear? The high waist is nice, but such a teeny back!

Natalie: I think it will quite comfortable. The waist rest above the natural waist, so even if the foundation is quite rigid, it doesn't really constrict me. And the huge armscye makes it much easier to move the arms. :)

Hello, this maybe kind of a totally random but here goes.

My name is Anthony Droghei, and i am a second year at the fashion academy in antwerp belgium, and we are in the process of recreating a historical costume, and i actually have to recreate this boned bodice. I had the documents but i left them at my school which is closed for holidays. anyway what i am i asking is if i can have the patterns for these jacket lining foundation?
:/ its really weird and totally out of the blue but im really desperate any imformation would be greatly appreciated.
please send and email to anthonydroghei@gmail.com if you can fix this.
best anthony

do you have the documents/patterns for recreating this?
i lost my copies and i currently in process of making it as well.
any information would be wonderful
best anthony

Anthony Droghei: The pattern can be found in "Seventeenth-Century Women's Dress Patterns by Jenny Tiramani and Susan North and is based on an original garment located at Victoia and Albert Museum.